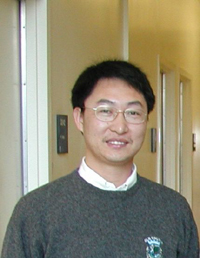 Dept. of Molecular Biology and Biochemistry, University of California Irvine, 2001-2003

Research in this lab is in the interface between chemistry, biology and medicine. This exciting field is the foundation of modern biomedical sciences which provide molecular basis for various biomedical processes. We are using multi-disciplinary approach including molecular biology, protein chemistry, synthetic and electro-chemistry, spectroscopy (NMR, UV-vis, CD, fluorescent, etc), chromatography and X-ray crystallography to investigate the molecular basis of certain genes, proteins, metal ions and signal transduction pathways related to cancer, aging, infectious, cardiovascular diseases and neurodegenerative disorders. Our research goal is to understand the molecular basis of these biochemical processes and to develop novel strategies for diagnostics and therapeutics. Current research activities are focusing on the biochemistry of iron and hydrogen peroxide homeostasis, as detailed in the following topics:

-Hydrogen peroxide (H2O2) is a small chemical which is generated by cellular aerobic metabolism. It is commonly known as one of the major cellular Reactive Oxygen Species (ROS) which has been implicated as the cause of aging and numerous diseases including cancer, stroke, cardiovascular disease, neurodegenerative diseases and chronic inflammatory diseases. Only recently, H2O2 has been identified as a beneficial signaling molecule, a messenger important for cellular processes including cancer, aging and apoptosis. Peroxidases and catalases are the major cellular enzymes killing hydrogen peroxide. The H2O2 -mediated signaling pathway is fine regulated by a novel type of enzyme called thioredoxin peroxidase or peroxiredoxins (Prxs). They are ubiquitous proteins found in almost all kingdoms of life. The essential role for peroxiredoxin in erythrocyte antioxidant defense and tumor suppression has been revealed recently, as well as their effects on cell differentiation and inhibition p53-induced apoptosis via H2O2-mediated signaling. Recent clinical studies have shown that Prxs are over-expressed in cancer tissues to a great extent, which link Prxs to cancer development or progression. In addition, pathogenic bacteria may benefit from Prxs by providing defense against the host immune system. Prxs are redox proteins using cysteines as their active sites. Peroxiredoxins, together with thioredoxin / thioredoxin reductases may offer novel drug targets for a variety diseases including cancer, aging, infectious, cardiovascular diseases and neurodegenerative disorders, etc. 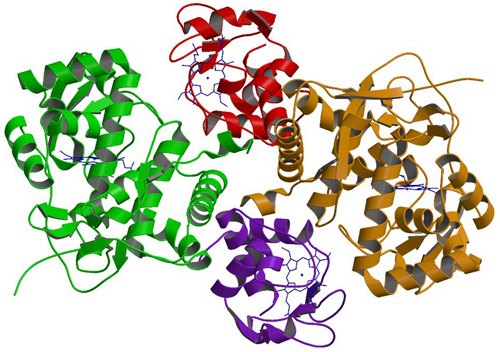 -Crystal structure of a cytochrome c peroxidase-cytochrome c cross-link (PNAS, 2004)
-The role of iron homeostasis in the biochemical mechanisms of action of cranberry's health benefits

-Health benefits of the North American native fruit cranberry (Vaccinium macrocarpon, Ait. Ericaceae) have been recognized since the early 1900s. The effectiveness of cranberry in preventing and treatment of urinary tract infections (UTIs) has been confirmed by randomized, double-blind placebo-controlled clinical trials. Recent research shows that cranberries and cranberry products may be beneficial in the treatment of stomach ulcers, gum diseases and dental infections. More interestingly, anti-oxidative effects have been demonstrated recently which are linked to potential protection against aging, stroke, cardiovascular diseases neurological disorders and cancer, etc. However, little is known about the biochemical mechanism of action of the health benefits of cranberry. We have hypothesized that regulating of iron homeostasis may play a pivotal role in the bio-effects of cranberry. This research is to investigate the biochemical mechanisms of action of cranberry's health benefits and to test our hypothesis.
-Iron acquisition in pathogenic bacteria

-Iron, an essential nutrient for living organisms, plays crucial biological roles ranging from oxygen transport, energy generation, signal transduction to bacterial virulence. In vertebrate hosts, iron is tightly sequestered by high-affinity iron-binding proteins therefore not freely available for invading bacterial pathogens. However, certain pathogenic bacterial have developed several highly specific strategies to steal iron from the host. They use specific cell surface receptors to capture host transferrin, lactoferrin or hemoglobin as valuable iron sources. The acquired iron or heme is passed to a periplasmic iron-binding protein or heme-binding protein which shuttles between the outer membrane and the inner membrane. The iron or heme is then transferred to cytosol via inner membrane proteins typical for ABC transporters. We are studying a few novel proteins involved in the iron acquisition of certain bacterial pathogens.
-Transferrin as a drug carrier to cancer cells

-Anticancer drugs normally target cells that are rapidly dividing, such as cancer cells. However, side effects are common because some of our normal cells such as those in our gastrointestinal tract, hair, and bone marrow are also rapidly dividing. Specific delivery of drugs to cancer cells is of great interest. Transferrin is a serum iron transport protein which delivers Fe(III) into cells via receptor-mediated endocytosis. The aim of this project is to harness the natural transferrin cycle to deliver drug specifically to cancer cells via the transferrin receptor which is over-expressed on the surface of cancer cells. 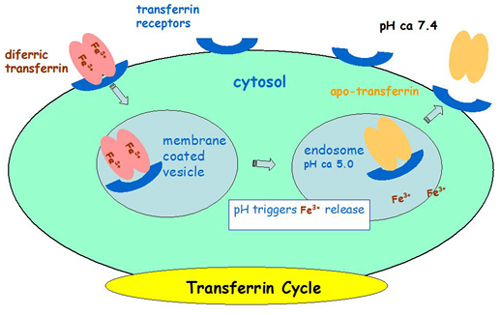