Math major plans a career as a sports statistician 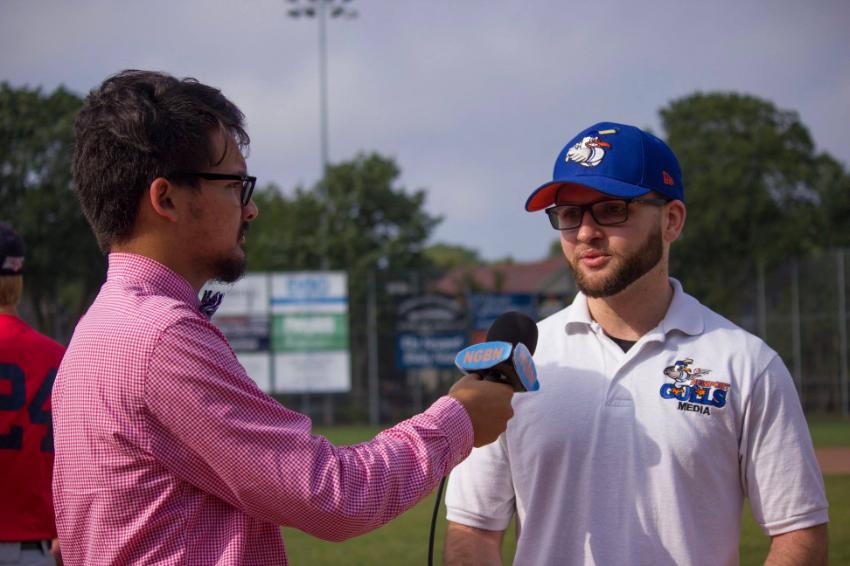 Andre Olivier '18, right, was interviewed at one of the Gulls' pregame shows by field reporter and fellow intern Nick Bello. (photo courtesy of the Newport Gulls' Facebook page)

This summer I was the official scorekeeper/statistician for the Newport Gulls, a collegiate summer league (NECBL) baseball team.

My job consisted of scoring the game both in a book and on a program that would load the live stats to the league website. I made rulings—hits/errors, wild pitch/passed ball, etc.—on all plays and informed the announcers of my decisions.

I learned quite a bit this summer, including many rules in baseball that I wasn’t aware of. I now feel much more comfortable with my knowledge of baseball and all the rules that are needed to be a professional scorekeeper or statistician.

Experience in a professional environment

The internship provided me with experience in a professional environment and allowed me to meet and talk to a lot of people who have been involved in sports for a long time. The Gulls are a premier organization in summer college baseball and having them on my resume, I believe, has greatly increased my potential for future jobs in sports.

I originally went to school as a liberal arts major and had plans to go with either English or math, but I decided on math after taking an intro to statistics class with Angeliki Kouma. Everything clicked, and I truly enjoyed her class. It was after that class that I had the plan of becoming a sports statistician.

Math professors who connect with students

Gary Davis was another professor whose classes I greatly enjoyed. You could tell he actually cared about the students' learning and understanding the material—and not just knowing it for a test, which is what students need more of. Scott Field and Bo Dong are other teachers who put in a lot of extra effort for their students and helped me a great deal both in class and during office hours.

Great start for a statistics career in sports

I have plans to continue in the realm of sports professionally, and I believe this internship has given me a great start. I believe that internships should be a requirement.

I would like to thank Amelia Alburn, Director of Experiential Learning & Internship Development at the Career Development Center. She gave me a ton of resources—not only for internships but also for searching for jobs in the future. She directly told me about the internship position with the Gulls.

I now feel much more comfortable with my knowledge of baseball and all the rules that are needed to be a professional scorekeeper or statistician.

I now feel much more comfortable with my knowledge of baseball and all the rules that are needed to be a professional scorekeeper or statistician.