In his recital, John T. La Barbera traces the history of stringed instruments from Renaissance Italy to the jazz scene in Brazil. 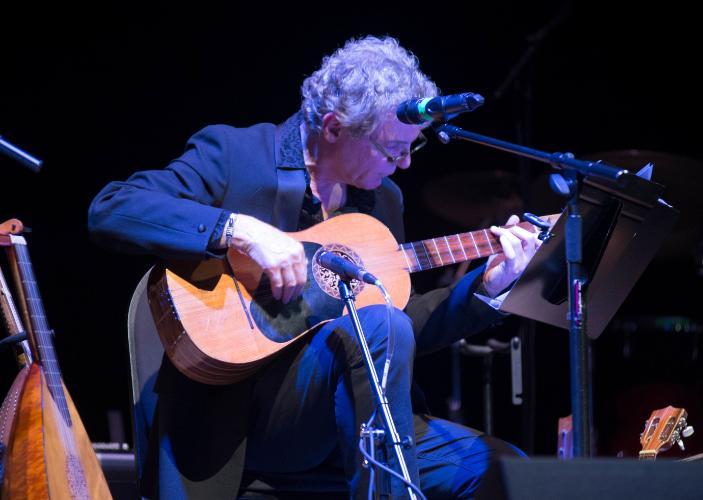 UMass Dartmouth’s College of Arts and Sciences and College of Visual and Performing Arts invite the university community and general public to a recital and lecture by John T. La Barbera, the 2016 Esposito Visiting Faculty Fellow.

“The World on a String” will trace the history of stringed instruments from Renaissance Italy to the jazz scene in Brazil. The recital will take place at the Stoico/FIRSTFED Charitable Foundation Grand Reading Room in the Claire T. Carney Library on March 31 at 4 pm. The event is free and open to the public.

John T. La Barbera, Academy Award-nominated film score composer and guitar and stringed instrument virtuoso, has won several awards and commissions from The Jerome Foundation, Lincoln Center for the Performing Arts, The Martin Gruss Foundation and the New York State Council on the Arts, Meet the Composer, and numerous composer awards from ASCAP.

The Italian Oral History Institute honored him in 2005 for the extraordinary role he played in the transmission and translation of Italian oral traditions. He was also recognized as one of the first transcribers of Southern Italian folk music in America.

He is currently an adjunct music professor at the Bergen Community College in Paramus, NJ, and an artist in residence at the Caramoor Center for Music and the Arts in Katonah, NY, with the educational program on Italian renaissance music. He continues to perform as a concert artist to audiences throughout the United States, Europe and South America.

Musical works of an instrument virtuoso

He has recorded numerous albums of traditional Southern Italian folk music and has appeared on projects with many artists, including folk singer Judy Collins, rock drummer John Densmore of THE DOORS, jazz saxophonist Mark Gross and jazz pianist Mulgrew Miller.

La Barbera was a composer, arranger, and musical director for an Off-Broadway Theater performance of Souls of Naples. His original folk operas include Stabat Mater: Donna di Paradiso; The Voyage of the Black Madonna; The Dance Of The Ancient Spider; La Lupa-The She-Wolf; The Adventures Of Don Giovanni And His Servant Pulcinella.

PreviousNext
College of Arts and Sciences, College of Visual and Performing Arts, News and Public Information