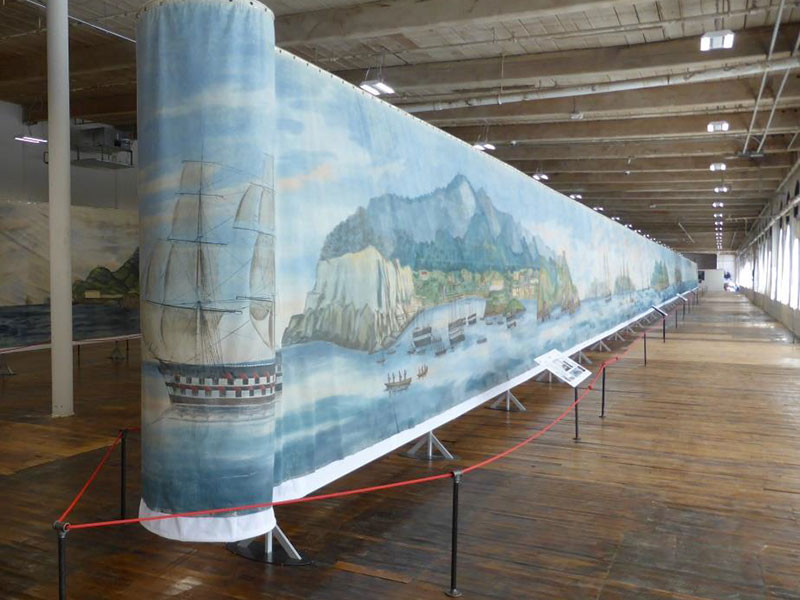 Charlotte Hamlin has been invited to give a case study on "Conserving the History and Fabric of the New Bedford Whaling Museum's Grand Panorama" at Yale's Institute for the Preservation of Cultural Heritage 2019 symposium on Conserving Canvas, October 14-17.

New Bedford's Panorama of a Whaling voyage, a 1340' long painting, was completed in 1848 and displayed as a moving panorama as far west as St. Louis in the 1850s. After many years of planning, the conservation of the panorama began 2017 and the completed "spectacle" was exhibited in New Bedford during the summer of 2018.

Charlotte Hamlin currently teaches in the Textile Design and Fiber Arts Program at the University of Massachusetts, Dartmouth. She received a BA in Anthropology from the University of Pennsylvania, a BSN in Nursing from Columbia, an MS in Nursing from Boston University and an MFA from the University of Massachusetts, Dartmouth in 1998. Charlotte was a Finalist in Sculpture/Installation for the 2001 Massachusetts Cultural Council Awards and has received residencies at Ucross in Wyoming and at the Edward Albee Foundation in New York. Her work has appeared in national and regional shows including the Chautauqua International for Fiberart; Textiles: Contemplative Language in Edwardsville, IL; and Contemporary Visions in Bridgeport, CT.

College of Visual and Performing Arts