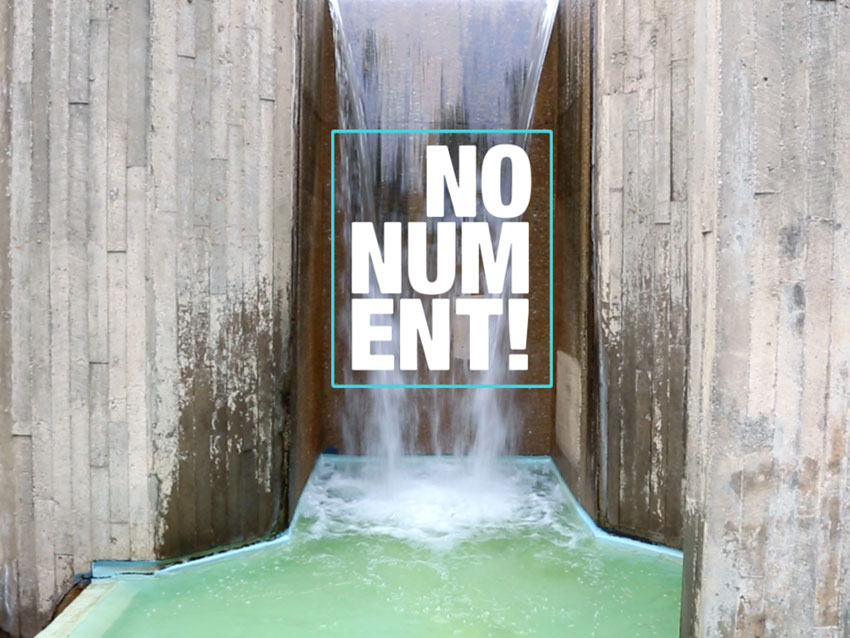 This exhibition, open through October 29 at UMass Dartmouth CVPA Campus Gallery, recreates a destroyed brutalist fountain in the heart of Baltimore’s Inner Harbor. Using the latest Augmented Reality (AR) technology, the free app addresses the politics of reclaiming public spaces that are of symbolic value to citizens.

Created by Baltimore artists Lisa Moren and James Mayhew, as well as Slovenian artists Martin Bricelj Baraga and Neja Tomšič, this exhibition consists of artistic productions and research aimed at defining the role of monuments today and the ways in which societies mark important landmarks in contemporary urban life.

On Thursday, October 4th, artist and professor Lisa Moren will give an artist talk, showcasing the NONUMENT 01 augmented reality app, in which the fountain’s history is told through various interactive “memory artifacts,” such as koi fish and protest signs, which, when clicked, will show interviews with Baltimore residents sharing their memories of events at McKeldin Square. In addition to functioning as a public art project and historical record, the NONUMENT 01 app is also a new form of technological protest, and will serve to draw attention to the increasing influence of private entities on public spaces across the world, which the NONUMENT 01 artists feel is detrimental to the ability of citizens to express their First Amendment rights through demonstration. McKeldin Fountain was declared a Free Speech Zone for safe public protest in 2013, and because McKeldin Square still holds that designation, the artists have included free speech tools in the app.

About Lisa Moren, Multi-Media Artist and Professor of New Media Arts at the University of Maryland

Lisa Moren is a multi-disciplinary artist who works with emerging media, public space, and works-on-paper. She created one of the first virtual reality projects, “Practically Tender” in 1991 at the Banff Centre for Art. Since 2001, through her artwork, she has worked with communities to document under-represented memories from Berlin and cities in Central and Eastern Europe that were archived as interactive installations. Her most recent collaboration is a public art project in augmented reality that replaces a utopian-style fountain in Baltimore City’s Inner Harbor and Free Speech zone that was demolished, entitled “NONUMENT01::The McKeldin Fountain.”

Lisa Moren has exhibited her work widely at the Chelsea Art Museum in New York City and in Brooklyn, the Cranbrook Art Museum and international venues including Ars Electronica (Austria) and Akademie der Kunste (Germany) and the Artists Research Network (Australia), and ISEA (South Africa). She received the National Endowment for the Arts award (2003), is a Fulbright Scholar to Czech Republic; a multi-year recipient of the Maryland State Arts Council and CEC Artslink International; and most recently a Saul Zaentz Innovation Fellow in Film and Media at Johns Hopkins University. Her writing has appeared in Performance Research; Visible Language; Inter Arts Actuel; New Media Caucus for “Algorithmic Pollution: Artists working with Dataveillance and Societies of Control” and “CYBER IN|SECURITY”; and her own books on Intermedia on Dick Higgins; and Issues in Contemporary Theory for “Command Z: Artists Working with Phenomena and Technology.” Ms. Moren has taught at the University of Maryland Baltimore County (UMBC) since 1998; FAMU and AVU in Prague; and the University of California San Diego. She is a Professor of Visual Art at UMBC and the Graduate Program Director of the MFA program in Intermedia + Digital Art.  For more information on Professor Moren’s art practice go to www.lisamoren.com.

**This project was funded by the Saul Zaentz Innovation Fellow at Johns Hopkins University Film + Media Program, as well as The Andy Warhol Foundation for the Visual Arts, The Grit Fund (Contemporary Museum), Imaging Research Center and CAHSS at UMBC.