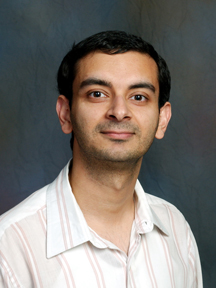 Advanced treatment of a special topic in physics or astrophysics with an emphasis on recent developments in these areas. The subject matter varies according to the interests of the instructor and students.

Continuation of PHY 411. Development of the wave equation. Electro-magnetic waves in space and in matter. Study of radiation from time varying charge and current distributions.

Dr. Khanna is a Professor in the Physics Department, and the Co-Director of the Center for Scientific Computing at the University of Massachusetts Dartmouth. He works on a variety of challenging problems in theoretical and computational physics. His primary research project is related to the coalescence of binary black hole systems using perturbation theory and estimation of the properties of the emitted gravitational waves.

This research is of relevance to the recently established NSF LIGO laboratory (and the upcoming space-borne missions) that have just succeeded in making a direct observation of these waves. Dr. Khanna has extensive parallel and scientific computing experience as a regular user of NSF’s XSEDE facilities, and also has detailed knowledge of a variety of computer architectures (multi-core CPU, GPU, heterogeneous, etc.). He has published over eighty (80) research papers in top international journals and secured over two million-dollars in research funding to date.

His research is supported by the National Science Foundation (NSF), MA Space Grant Consortium (NASA), US Air Force Research (AFRL/AFOSR), private foundations (FQXi and others) and the computer industry (Apple, IBM, Sony, Nvidia and others).