2019 was a year of many accomplishments for our students, faculty, and staff. 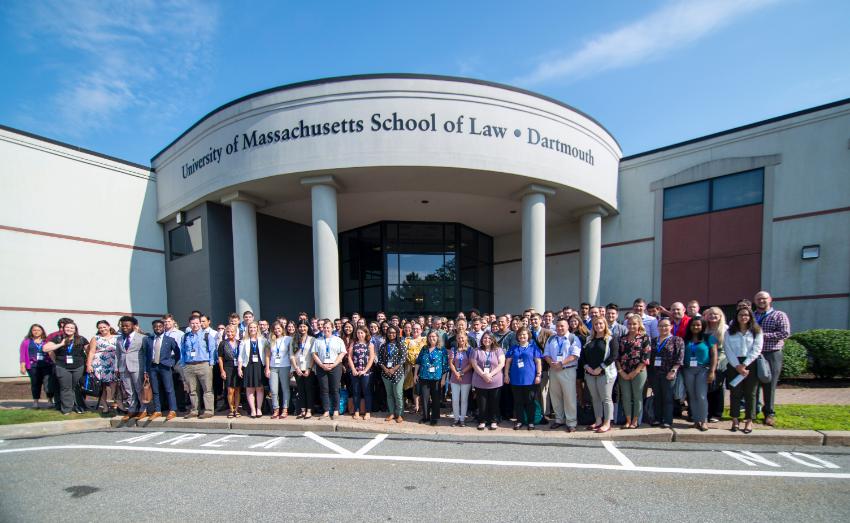 For the second year in a row, UMass Law applications grew by more than 20%, while the national average was a 1.5% decrease. Only nine of the 200+ law schools in the United States experienced at least a 20% increase in applications this year.

UMass Law saw a 21.5% first-year enrollment increase; the 113 new students brought total enrollment to 279 students. Incoming student LSAT scores and undergraduate GPAs increased across the board, making the incoming class the most academically qualified in the history of the school.

Alexandria Murphy, JD candidate '21 interned with Senator Rodrigues this summer as a Michael Dukakis Public Service Fellow and finished a JAG internship with this semester.

Alexandria Murphy, JD candidate '21 during her internship with Senator Rodrigues

UMass Law was one of five law schools featured for successful strategies for helping students pass the bar exam in National Conference of Bar Examiners' summer volume of Bar Examiner.

In its 2019 edition, the Black Student’s Guide to Law Schools & Firms ranked us as one of the top five law schools for black students in the east.

The Class of 2019 ranked #1 in New England for the percentage of graduating students of color.

The SouthCoast Chamber of Commerce recognized the Community Development Clinic and students with the 2019 Education Leadership Award for assisting in the integration of the Fall River and New Bedford Chambers of Commerce.

New 3+3 agreements were created with Salem State University, Assumption College, and Anna Maria College, bringing the total number of fast track programs with local universities to twelve. Under these agreements, students can earn a bachelor’s degree and a law degree in six, rather than seven, years.

2019 brought new scholarship opportunities like the Hispanic Police Officers of New Bedford Scholarship and a scholarship endowment in memory of Mardee Xifaras.

The 2019 annual UMass Law Review Symposium featured local and national experts on the intersection of media and law. Panel topics included Media Engagement in Politics & Government, Cyber Law Concerns in the Digital Age, and Creativity in an Evolving Regulatory Environment.