Dr. Craig P. O'Connell, who studied at UMassD's School for Marine Science and Technology was recently honored for his achievements at the 45th Annual Alumni Awards Ceremony. 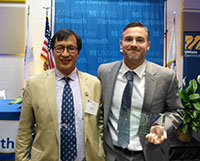 ‌ Craig P. O’Connell was honored at the 45th Annual Alumni Achievement Awards, which took place at UMass Dartmouth’s Woodland Commons on Sunday, September 27, 2015. Dr. O’Connell pursued his PhD at UMassD’s School for Marine Science and Technology (SMAST) where he studied shark magnetoreception and earned his PhD in 2014. He is the founder and director of O’Seas Conservation Foundation, Inc.— a nonprofit focused on shark conservation research and youth education. He has authored over 20 scientific publications and hosted/presented episodes for the Smithsonian Channel and Discovery Channel’s Shark Week.

In addition, O'Connell has led scientific expeditions all over the world where he developed a new conservation-based technology, known as the Sharksafe barrier— a magnetic deterrent technology that may soon become an eco-friendly alternative to the beach nets deployed in areas such as South Africa and Australia that essentially kill sharks to minimize the potential for shark incidents with surfers and swimmers. Craig completed his BA at Boston University, his MSc at Coastal Carolina University, and his PhD at UMass Dartmouth.

“UMassD gave me a top-notch education and taught me the beauty of collaboration."

School for Marine Science and Technology

“UMassD gave me a top-notch education and taught me the beauty of collaboration."