When it comes to the science of climate, there’s no question that Dr. Cynthia Pilskaln, Professor of Oceanography at UMass Dartmouth’s School for Marine Science & Technology (SMAST), is one of the leading authorities in the Southcoast area of Massachussetts.

Over the past few months, Pilskaln has been widely consulted for her expertise in the areas of climate change and climate-related resiliency planning.

This past April, by invitation from Congressman Bill Keating and State Representative Tim Madden, Pilskaln served as a panelist on an advisory committee comprised of energy sustainabilty experts, NOAA reps, politicians, and her fellow colleagues at the Ocean Acidification (OA) meeting in Woods Hole. During the forum, Pilskaln discussed increased ocean acidity and its potential impacts on marine organisms – including seafood species, such as oysters and bay scallops.

More recently, Pilskaln opened her lab at SMAST’s two-story, 32,000-square-foot New Bedford building, and discussed the ocean-acidification-based research she’s been conducting. United States Senator Edward Markey, a consumer champion and national leader on energy, environmental protection and telecommunications policy, was one of various policymakers in attendance to hear from Pilskaln and her colleagues.

The consensus is that we’ll see a large drop in shellfish production in the Gulf of Maine.

In addition to discussing the research SMAST scientists are conducting across various areas as well as key challenges facing fisheries, a significant part of Markey's visit took place in Pilskaln’s lab where she talked about the effects of ocean acidification on the Gulf of Maine, which is experiencing higher temperature changes compared to other areas.

The Gulf is also experiencing low oxygen levels compounded by fresh waters low in carbonate ion—thus more acidic—that are flowing into the Gulf from the Artic and melting in high volumes. “All three of these impacts must be looked at in the prediction models,” said Pilskaln. 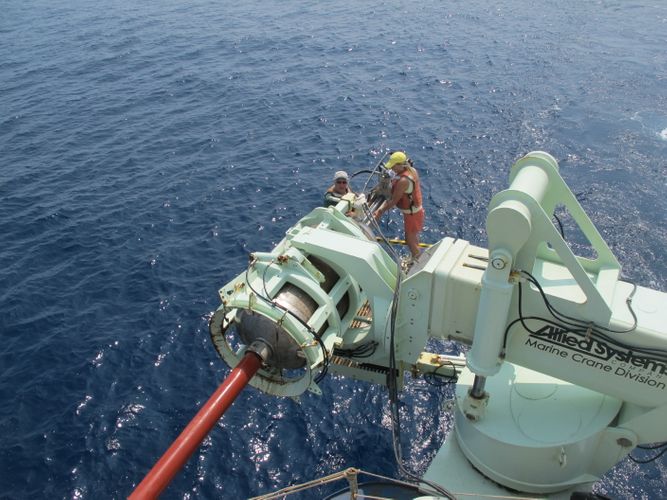 Determining ways to sustain the shellfish culture as well as create more opportunity for shellfish to be productive in lieu of the fact that the ocean is changing are primary goals.

Professor Pilskaln is an expert in marine biogeochemistry and sedimentology. Her research interests include geochemical particle fluxes in the ocean and large lake systems with emphasis on their quantitative relationship to climate forcing over short and long-time scales and to underlying sediment record.

Development and use of particle imaging instrumentation, submersible vehicle-based technology, and image analysis techniques for the in-situ study of marine particulates and plankton within the Department of Estuarine and Ocean Sciences at SMAST are focal points of her research practices.

The consensus is that we’ll see a large drop in shellfish production in the Gulf of Maine.