Sea ice: a key regional feature of the Arctic Ocean and a sign of global climate change

The Arctic Ocean plays a significant role in the global ocean circulation and water exchange as a connection between the Pacific Ocean and the Atlantic Ocean. The Arctic outflow drifts out of the Arctic Ocean and into the North Atlantic Ocean through two main pathways: the Fram Strait and the Canadian Arctic Archipelago (CAA), which encompasses copious islands, straits, and narrow and shallow channels.

Ice formation and melting is one of the major sources controlling the variability of freshwater content in the Arctic, which directly contributes to the freshwater torrents into the North Atlantic Ocean. Therefore, sea ice is a key regional feature of the Arctic Ocean and a sign of global climate change.

The team is also examining the significant impact of climate change on the sea ice variation and researching the relation of sea ice to atmospheric forcings. To accomplish their goal, Zhang and team have developed a high-resolution, unstructured-grid, fully ice-sea coupled Arctic Ocean Finite-Volume Community Ocean Model (AO-FVCOM) to simulate the seasonal and year-to-year variability of sea ice and current circulation in the Arctic Ocean. 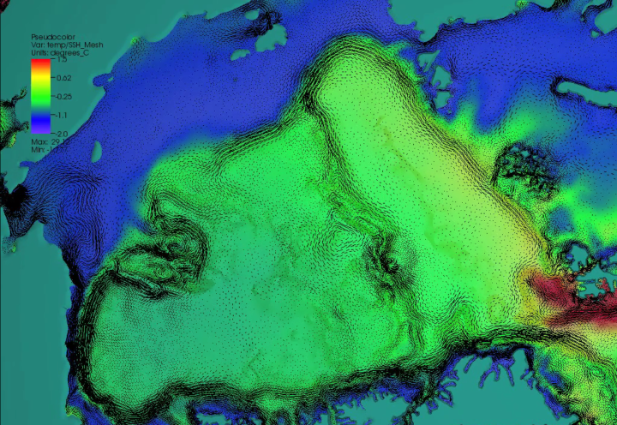 The research and findings are pivotal given that over the last four decades, the sea ice cover area in the Arctic has dramatically changed. From the period of 1978-2014, the thinning of the sea ice thickness co-occurred with the declining of the sea ice area. The melting sea ice will force the global sea level rise. “Under this situation, if we can use a state-of-art numerical model to forecast the variation of sea ice, we will estimate the sea level rise in advance according to the amount of sea ice melting and take actions to protect these regions in time,” said Zhang.

Zhang and his collaborators conclude that this acceleration of sea level rise can considerably influence human populations in coastal and island regions. The Arctic Ocean circulation also affects the natural environments like marine ecosystems in Gulf of Maine.

In the Arctic Ocean, there is a strong along-slope current which is called the Labrador Current from the Greenland coast. "This current carries relative cold and fresh water from the Arctic Ocean and flows southward into the Gulf of Maine along the continental slope,” said Zhang. “The changes of temperature and salinity in the Gulf of Maine caused by this current can influence the distribution of marine animals and the fisheries resources.”