Owen Nichols, who is pursing his studies at SMAST, is the second recipient of the Gulf of Maine Research Institute’s John Annala Fishery Leadership Award.

The Gulf of Maine Research Institute has awarded UMass Darmouth's School for Marine Science & Technology (SMAST) PhD candidate Owen Nichols the John Annala Fishery Leadership Award. The honorary award was established in 2013 to recognize the contributions that the GMRI’s first Chief Scientific Officer, John Annala, made to GMRI and to the fisheries science and management community in the northeast.

Nichols, who was recently presented with the award during the RARGOM Annual Science Conference in Portsmouth, NH,  is the second recipient of the award, which honors early career scientists who are conducting research relevant to New England fisheries. “Nichols’ research on the ecology of squid, an important emerging species, and his commitment to doing collaborative research with the fishing industry are a great example of the kind of work that the award was meant to recognize,” said Andrew J. Pershing, Chief Scientific Officer and Ecosystem Modeler at the Gulf of Maine Research Institute.

Passionate about his work, Nichols’ track record as a marine scientist includes currently serving as director of the Center for Coastal Studies Marine Fisheries Research program, which fosters collaboration and understanding between the fishing and scientific communities while focusing on a wide range of research topics.

He is currently working with commercial weir fishermen in Chatham to study the effects of environmental variables on the distribution of longfin inshore squid (Doryteuthis pealeii) – a project begun as part of his doctoral research at SMAST and supported by the Massachusetts Marine Fisheries Institute and grants from the Norcross Wildlife Foundation/A.V. Stout Fund and the Sounds Conservancy/Quebec-Labrador Foundation as well as scholarships from the Friends of Chatham Waterways and the Marine Technology Society.

Working together, fishermen can combine their skills and knowledge with the tools and techniques employed by scientists to conduct field research aimed at filling gaps in our knowledge and providing managers with sound science on which to base management decisions. 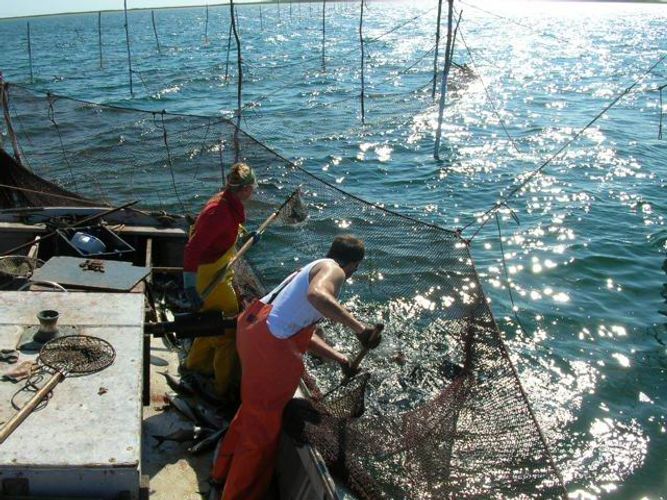 Over the course of his career as a marine scientist, Nichols has been utilizing modern scientific methodologies to study the catch from one of the oldest forms of commercial fishing, the weir – an oversized fixed trap of nets and poles that guide and entrap fish into a large corral. The Cape Cod native also works with fishermen in his hometown, collaborating to understand the ecology of larval squid, which involves investigating embryonic development and the influence of environmental factors such as water temperature on hatch timing and survival.

Nichols says understanding the responses of squid to temperature, oxygen, wind, and other factors has profound implications for the interpretation of abundance surveys and landings data, on which managers base decisions, as well as an understanding of the potential effects of climate change.

“There are many aspects of fisheries biology, ecology, and oceanography that are poorly understood and yet crucial to an accurate understanding of how fishing and other human activities affect the marine ecosystem and how best to manage fishing activity,” said Nichols. “Working together, fishermen can combine their skills and knowledge with the tools and techniques employed by scientists to conduct field research aimed at filling gaps in our knowledge and providing managers with sound science on which to base management decisions.”

Nichols earned his B.A. in Marine Affairs from the University of Rhode Island and his M.S. from UMass Dartmouth’s School for Marine Science & Technology where he is currently pursuing his PhD.

In March of this year, his research on "Environmental effects on squid availability to a seasonal inshore fishery: Untangling drivers, mechanisms and scales" earned him an award for Best Oral Presentation by a PhD student during the 8th annual Intercampus Marine Science Symposium hosted by UMass Dartmouth.

Nichols is also a guest investigator at the Woods Hole Oceanographic Institution.

Working together, fishermen can combine their skills and knowledge with the tools and techniques employed by scientists to conduct field research aimed at filling gaps in our knowledge and providing managers with sound science on which to base management decisions.