Clifford Submits a Brief to the Supreme Court for the Case Google v. Oracle

UMass Law Professor Ralph Clifford submitted a brief with a team of UMass Dartmouth and UMass Lowell researchers to the Supreme Court for the case Google v. Oracle. 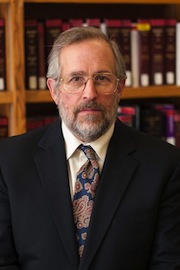 UMass Law Professor Ralph Clifford submitted a brief to the Supreme Court for the case Google v. Oracle. Professor Clifford wrote the brief alongside a team of researchers based at UMass Dartmouth and UMass Lowell. Google v. Oracle involves the meaning of a copyright in computer software. The trial determined that Google copied many thousands of lines of code that had been written by Oracle.

The brief argues that the code that was taken is clearly expressive based on the Team’s research findings that even the most basic programs show significant variation of expression. The code that Google took defined the existence of specific computing functions, such as determining which of two numbers is the larger one. Although Google did take these definitions, its programmer re-wrote the code that was needed to perform the function. Google then used the code to create (and then sell) the Android system for cell phones.

The first major issue in the case is understanding what owning a copyright in computer software means. All agree that a copyright only protects an “expression” and does not protect any underlying ideas. Yet there is significant disagreement over whether code is an expression or an idea. The second issue in the case is the meaning of the “fair use” defense where copying is allowed even though the copyright exists. Here, the main question is whether allowing computer programs to be written in a way that favors easy interoperability constitutes fair use.