Duncan Quoted by Supreme Court in Little Sisters Case, Going Two for Two in Amicus Briefs in Support of Religious Freedom this Past Term

Professor Duncan was quoted by the Supreme Court and helped win two for two cases this term involving religious freedom. He participated in both cases as an amicus curiae, or friend of the court. 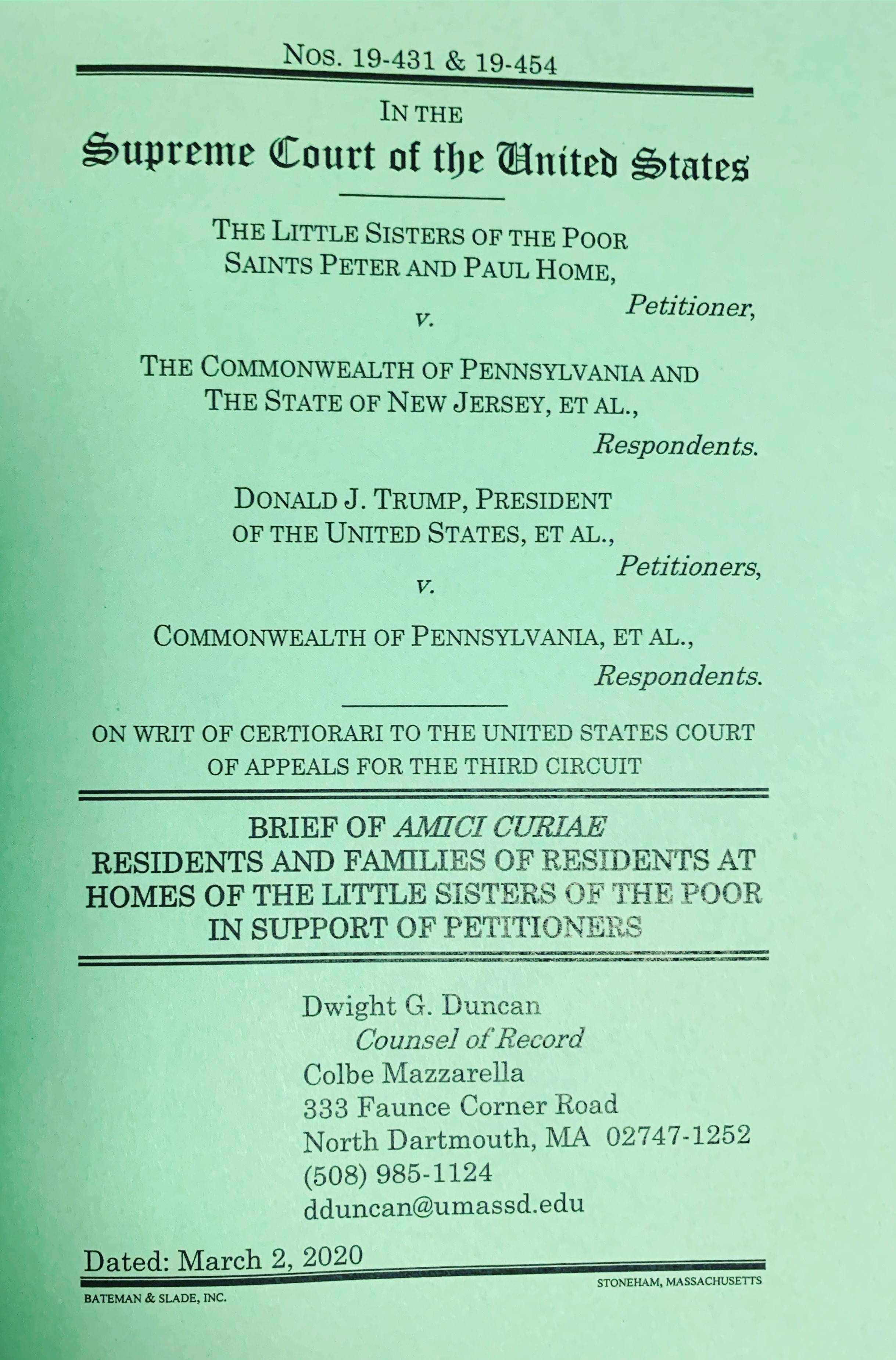 This was a personal first for Professor Duncan on two counts.  It was the first time the Court quoted him, and the first time an amicus brief of his was cited in a majority opinion.  Last week, Justice Samuel Alito had cited a second amicus brief of Duncan’s, but that was in a concurrence in the case of Espinoza v.  Montana, a 5-4 decision striking down a Montana law prohibiting the use of state private school tuition assistance to attend religious schools.  (Years ago, Justice Antonin Scalia had cited another Duncan amicus brief in dissent.) Graduating UMass Law 3L’s Kyle Zacharewicz and Daniel Tocci, his instructional and research assistants, assisted with the preparation of both amicus briefs, as did Brian Mandrik, UMass Law ‘16.

The Little Sisters case decided 7-2 that an HHS regulation, which exempted the Little Sisters of the Poor and others with religious or moral conscientious objections from Obamacare’s contraceptive mandate, was legally valid.  This matter had been in litigation for more than five years, and Duncan had filed an amicus brief on behalf of residents and families of residences at Little Sister homes, both at the certiorari phase, and on the merits.

This Supreme Court decision marked the second time in as many weeks that the Court had ruled in favor of religious freedom in a case where Duncan participated as counsel of record for an amicus.   His record before the Court this term was two for two.  The second case was Espinoza v. Montana case, which struck down a state law preventing religious schools from participating in generally applicable state scholarship programs.  In that case Duncan represented Pioneer Institute, an independent, non-partisan research organization, as amicus, at both the petition phase and the merits phase.  In his concurrence, Justice Alito cited Duncan’s amicus brief.

“It’s gratifying to help win a couple of cases involving religious freedom at the Supreme Court,” says Duncan, who regularly also teaches a course at UMass Law in Religion and the Law.  “At a time when people around the world are being persecuted and discriminated against for their religious beliefs, it seemed important to cultivate a generous understanding of religious liberty at home, a City on the Hill when it comes to religious freedom and free speech.”  While obviously not everyone will agree on controversial issues of public importance, our constitutional system allows for the peaceful resolution of public policy disputes through respect for the rule of law and our constitutional system of government.

The Full Court decision of the U.S Supreme Court on Espinoza v.  Montana