Breaking the News: Portuguese Lusotropicalist Public Relations and Lobbying in the United States, 1961-4, by Gilberto Fernandes 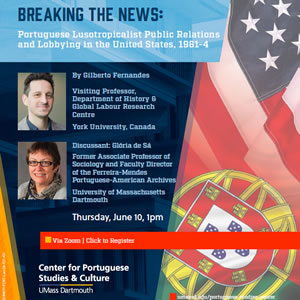 Please join us and the Ferreira-Mendes Portuguese-American Archives for a virtual presentation by Dr. Gilberto Fernandes titled "Breaking the News: Portuguese Lusotropicalist Public Relations and Lobbying in the United States, 1961-4," with the special participation of Prof. Glória de Sá.

Dr. Fernandes' presentation will examine an important episode in the history of "fake news" in American mainstream media related to the Estado Novo's pro-colonialist propaganda and lobbying campaign in the United States during the Presidency of John F. Kennedy. It will discuss the operations of the New York-based public relations firm Selvage & Lee and the non-diplomatic activities of Portuguese-American “foreign agents,” as revealed by a Senate Committee on Foreign Relations investigation that led to the 1966 amendments to the Foreign Agents Registration Act. Dr. Fernandes' lecture introduces an Anglophone dimension to the study of lusotropicalism outside of the “Lusophone world,” by exploring some of the channels through which its pro-miscegenation ideas were disseminated among American conservatives, including right-wing African-American intellectuals.

Gilberto Fernandes is a Visiting Professor in the Department of History and the Global Labour Research Centre at York University, in Toronto, Canada. He is the author of the book This Pilgrim Nation: The Making of the Portuguese Diaspora in Postwar North America (Toronto: University of Toronto Press, 2019) and various peer-reviewed articles about the history of the Portuguese communities in Canada and the United States. Recently, his research interests have expanded to include the history of construction workers and their unions in Canada. Fernandes is also an award-winning public, digital, and oral historian, curator, and documentary filmmaker with multiple credits, including the Portuguese Canadian History Project, which he co-founded and has presided over since 2008.

Gloria de Sá has a Ph.D. in sociology from Brown University and is a former (retired) associate professor of sociology and faculty director of the Ferreira-Mendes Portuguese-American Archives at the University of Massachusetts Dartmouth, U.S.A. Her research interests and publications intersect the fields of immigration and ethnicity, with a particular focus on the adjustment process of Portuguese-Americans. A Portuguese immigrant to the U.S. herself, she has worked with various community organizations serving immigrants, including the Immigrants Assistance Center and the Community Economic Development Center in New Bedford, Mass, U.S.A.

- View the flyer of this Webinar.