"Expressions of Portuguese Immigration in North America: Cultural Heritage as a Catalyzing Tool". A public webimar by Professor Walter Rossa 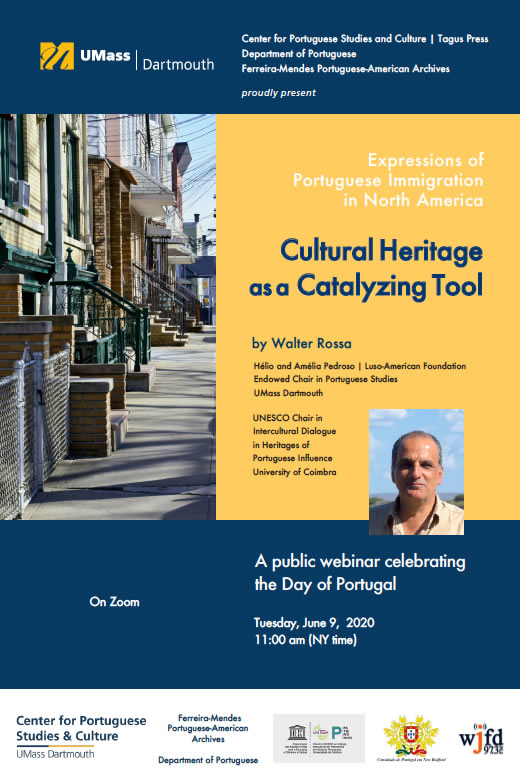 The Center for Portuguese Studies and Culture/Tagus Press in collaboration with the Department of Portuguese, the Ferreira-Mendes Portuguese-American Archives, the Consulate of Portugal in New Bedford, and WJFD 97.3FM presents a public webinar:

Expressions of Portuguese Immigration in North A​merica: Cultural Heritage as a Catalyzing Tool
(research report draft of the immersion provided by the Endowed Chair)

The webinar will be conducted via Zoom.
You will receive the link when you complete your registration.
Abstract. The expressions of Portuguese immigrant communities in North America are very unevenly researched and known. Literature and history are the most widely known and studied. Nonetheless, many other forms of expressions like material culture and space remain neglected. A diverse assembly of scholars, university and college centers, publishing houses, media outlets, and associations have invested a great deal of effort in the area. However, we still lack an inclusive consciousness of the relevance of these cultural expressions as a factor underwriting such movements for the recognition of the Portuguese American community as, for example, the Portuguese American Citizenship Project or the Make Portuguese CountTM campaign. This public webinar aims to present the first draft of a proposal about the use of the cultural heritage concept and methods as a critical leverage tool for those kinds of actions. All synergic processes generate much more than the sum of their parts, reflecting on each contributing element and bringing to light new ways of seeing, acting, and recognizing who we are and where we can go.
Bio. Walter Rossa is an architect, full professor in the Department of Architecture and researcher at the Center for Social Studies at the University of Coimbra. At Coimbra, he co-coordinates the Ph.D. program Patrimónios de Influência Portuguesa (in cooperation with the universities of Bologna, Federal Fluminense, Paris Ouest, Eduardo Mondlane and Algarve), holds the UNESCO Chair in Intercultural Dialogue in Heritages of Portuguese Influence, and teaches courses on cultural heritage, town and regional planning, urban design, and urban history. He co-holds the Cunha Rivara Chair at Goa University, chairs the Scientific Committee of the Património Histórico Iberoamericano (Ibero-American Historical Heritage) network, and is an Expert Member of the ICOMOS's CIVVIH, International Committee on Historic Towns and Villages. In addition to his activity as a practicing architect and town planner, Rossa researches the theory and history of architecture and urbanism, especially town planning and design, landscape, and cultural heritage of the former Iberian colonial universe. He has edited, authored, and co-authored a large number of publications in Portuguese, English, Spanish, and Italian. His most recent research efforts were dedicated to the cooperation and operative relation between heritage, history, planning, and development. He is currently developing a new research project on Portuguese immigration heritage.
Next
Portuguese Dept, Center for Portuguese Studies, Portuguese, Events