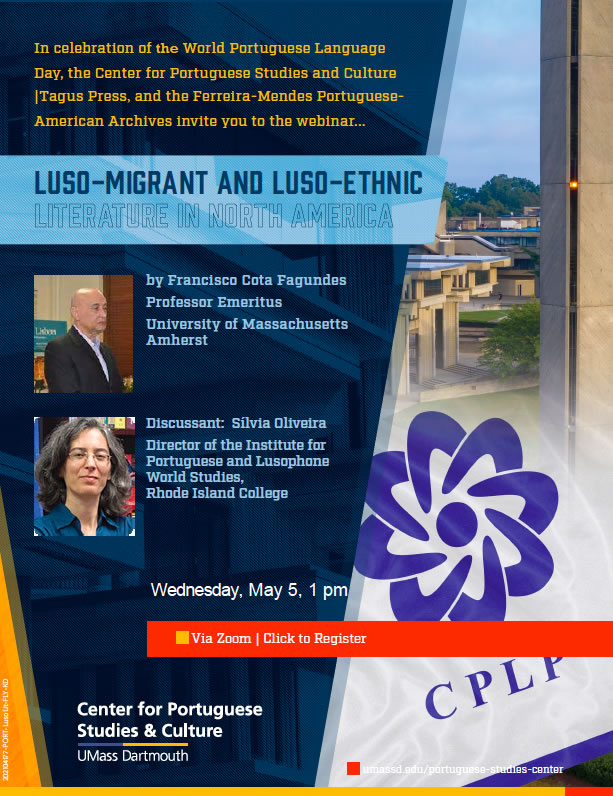 Please join us and the Ferreira-Mendes Portuguese-American Archives for a virtual presentation by Prof. Francisco Cota Fagundes titled "Luso-Migrant and Luso-Ethnic Literature in North America," with the special participation of Prof. Sílvia Oliveira.

This presentation aims to contribute to the history of Luso- e / immigrant and Luso-ethnic literature in the U. S. and Canada, which is viewed as one literature separate from other migrant and ethnic Portuguese-language literature(s). It will identify four distinct and, in some cases, concurrent phases or generations. As one would expect, this minority literature reflects economic and political conditions in Portugal, as well as American political attitudes towards immigration in the United States.

Sílvia Oliveira is Associate Professor of Portuguese Studies at Rhode Island College and coordinates the Portuguese Studies Program in the Modern Languages Department. She is also the Director of the Institute for Portuguese and Lusophone World Studies at RIC. She has published and presented on the Portuguese short story of the 1960s, Neo- and Post-Neorealism in Portugal, Aesthetics and Politics in Portuguese, Lusophone African and Brazilian Literature, and pedagogy of Portuguese language and Lusophone cultures. Her current research interests and publications include Portuguese-American literature and the pedagogy and politics of ethnic studies; and Portuguese-American civic organizing in the US.

- View the flyer of this Webinar