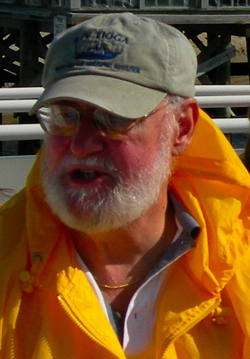 John W. Farrington is currently Scientist Emeritus at Woods Hole Oceanographic Institution (WHOI) and Adjunct Professor, Department of Estuarine and Ocean Sciences, School of Marine Science and Technology (SMAST), UMassD. Most recently, he served as Interim Dean and Professor, School of Marine Science and Technology, UMassD August 1, 2009 to July 15, 2011 and then Interim Provost UMassD January 2012 to November 30, 2012 assisting his alma mater during transitions of Deans of SMAST and of Chancellors at UMassD. John earned a B.S. in Chemistry, 1966; and an M.S. in Chemistry, 1968 from the Southeastern Massachusetts Technological Institute (SMTI, UMassD's predecessor institution). These degrees launched John on a rewarding career in academic research, teaching, advising, mentoring and service. His SMTI education was followed by graduate studies and research leading to a Ph.D. degree in Chemical Oceanography at the Graduate School of Oceanography, University of Rhode Island January 1972.

John's career as a marine biogeochemist includes a postdoctoral appointment then Scientific Staff appointments with successive promotions and tenure and Senior Scientist appointments at WHOI from July, 1971 to February 2006 when he retired from WHOI. He has served as Associate Director for Education and Dean of Woods Hole Oceanographic Institution 1990-March 10, 2002, and as Vice President for Academic Programs and Dean 2002-2005. Between February 1988 and August 1990 he held an appointment as Michael P. Walsh Chair and Director of the Environmental Sciences Program at the University of Massachusetts Boston. He also served July 1, 2008-June 30, 2010 as President of the Ocean Sciences Section of the American Geophysical Union.

John taught graduate courses and advised graduate students for their M.S. and Ph.D. degrees in the MIT-WHOI Joint Program in Oceanography and Applied Ocean Sciences and Engineering and at UMass Boston. He has been a member of advisor committees for several international, national, state and local agencies and organizations. He has testified several times before the United States Congress on matters pertaining to oceanic and coastal environmental quality issues. Among the honors he has received are the Samuel P. Stone Alumni Award for Science from the College of Arts and Sciences, UMassD, The Bostwick H. Ketchum Award of Woods Hole Oceanographic Institution, The David Stone Award of the New England Aquarium, National Associate (life appointment) of the National Academies, Fellow of the AAAS, Doctor Honoris Causa the University of Concepcion, Concepcion, Chile, and the Chancellor's Medal from the University of Massachusetts Dartmouth.