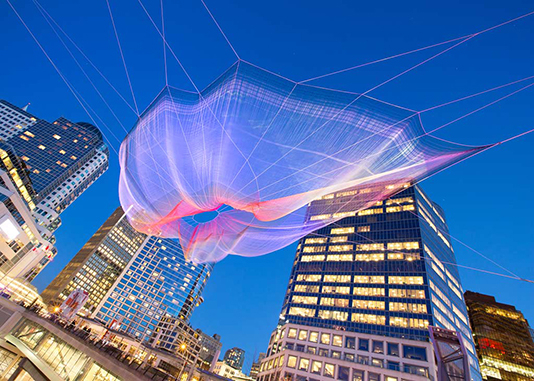 Public art is used to raise awareness, to shift ways of thinking, and to protest. In the past, this work bypassed galleries, museums, and formal art institutions and instead found its home on streets and public squares. Today, public art is increasingly showcased on social media. Transcending geographical borders, in the past two decades art of various mediums has been generated and displayed on social media networks in the hopes of creating a better world.

The current political climate in the United States, combined with human rights issues in various parts of the world have created an influx of activist art with strong public presence. Additionally, as our culture becomes more and more visual, activists increasingly turn to art to draw more attention to their political agendas. The Sixth Art History Undergraduate Symposium at the University of Massachusetts Dartmouth aims to examine the intersections of public art and activism.

2017 Playful Perspectives by Lucas Cowan, Curator of the Rose Kennedy Greenway, Boston, MA. Before his tenor at the Greenway, Mr. Cowan worked for the Maryland State Arts Council as the director of public art programs, and senior curator of exhibits for Millennium Park in Chicago.