Dr. Aminda O'Hare has been accepted by the Emory-Tibet Science Initiative to teach a two-week course in affective neuroscience to Tibetan monks at Sera Monastery. 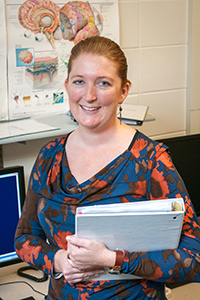 Dr. Aminda O'Hare, assistant professor in the Psychology Department, has been accepted by the Emory-Tibet Science Initiative (ETSI) to teach a two-week course in affective neuroscience to Tibetan monks at Sera Monastery, one of the three monastic universities in India.

The ETSI is an educational program that works to bridge the gap between science and spirituality by integrating contemplative Buddhist practices with modern science.

Scientists, who contribute to new discoveries surrounding the science of the mind and body, will give Tibetan monks the necessary tools they need to understand the contemporary world.

"The initiative helps these monks grasp a basic understanding of science that they don't have, which helps them move into the modern world," said O'Hare. "It also works to keep Buddhism relevant and to engage people about contemplative practices."

In collaboration with Emory University, the ETSI developed a four-year curriculum for Tibetan monks to get formal basic training in physics, biology, chemistry, and neuroscience—O'Hare's specialty. O'Hare's area of expertise focuses on cognitive and emotional processes within the brain, and she conducts studies on how mindfulness meditation can change the relationship between attention and emotion.

"The monks are particularly interested in affective neuroscience, which is the study of emotional processes of the brain," said O'Hare. "Another topic I will focus on with them is the phenomenon of addiction, as they've expressed interest in conceptualizing it, especially in regards to its prevalence in western culture."

Immersed in a new teaching experience

O'Hare is part of a six-person scientist team that will travel to Sera Monastery this summer where they will also be encouraged to learn more about the Buddhist science of mind, as well as how it can contribute to the understanding of emotion, consciousness, and human well-being.

"We will live at the monastery with the monks, so it will be a completely immersive teaching experience from our end," said O'Hare. "The monks will also be able to receive different versions of science from different specialists, ranging from biologists, pharmacologists, psychologists, to science communications specialists, and it will help to put everything in context in terms of society and culture."

The initiative helps these monks grasp a basic understanding of science that they don't have, which helps them move into the modern world.

The initiative helps these monks grasp a basic understanding of science that they don't have, which helps them move into the modern world.

The Research Psychology option is a 36-credit MA program that requires two years of full-time study. This program is designed to prepare students for doctoral work in psychology and related fields as well as for careers in research requiring a masters’ level education.

The program combines coursework in basic areas of psychology with research skill objectives, such as critically analyzing research and designing studies. This coursework provides the basis for collaborative research with faculty members.