A study on the usage of social media by the top charities and nonprofit organizations in the US.

The Center for Marketing Research at the University of Massachusetts Dartmouth recently conducted an in-depth statistically valid study on the usage of social media by the top charities and nonprofit organizations in the United States. The study was conducted using the 2013 Philanthropy 400 list.

In this study, the 2013 list of the Philanthropy 400 was examined. Because the list includes large nonprofits along with cause-related charities, the decision was made to exclude the category of colleges and universities from the study in order to focus on the more popular and traditional definition of charities and nonprofits. The original list of 400 includes 113 colleges and universities.

Besides the more traditional charities that rely on a broad pool of donations from Americans at all income levels, the list does include organizations that create charitable funds for donors and those that depend on America’s wealthiest philanthropists. These groups were included in this study. Our final sample includes 86% or 246 of the remaining charities after removing colleges and universities.

The research presented here was conducted using two approaches, internet searches and telephone interviews. First, the homepages of the organizations were inspected to identify which social media tools were being used and which social media sites were accessible with direct links from the homepages. If no links were located from the homepage, a search was done both on and off their site looking for evidence of social media usage. The second level of research involved nationwide telephone surveys of 129 of those organizations. All interviews took place in the spring of 2014, under the direction of researcher Dr. Nora Ganim Barnes.

The data that follows are based on homepage reviews, internet searches and detailed interviews with administrators of the organizations from top charities in the United States. The organizations that participated are diverse in many ways including their missions, size and total private support they receive. Their headquarters span the entire United States. The information in this study is based on data received from some of the most well known charities and nonprofits in the country including the YMCA, Habitat for Humanity, American Red Cross, and the American Cancer Society.

On the 2013 Philanthropy 400 list, the number 2, 3, and 4 charities listed, Fidelity Charitable, The Salvation Army, and The Task Force for Global Health, participated in telephone surveys and are included in the study which features information on 63 of the top 100 charities identified on the list. This statistically valid study takes an unprecedented look at the use of social media tools among these savvy motivators.

Highlights of the study include:

Nine of the charities and nonprofits studied jumped 100 places or more on the Philanthropy 400 list for 2013 compared with just one year earlier. These include the San Francisco Museum of Modern Art (moving up 266 spots), the Wounded Warrior Project (moving up 148 spots) and the American Endowment Foundation (moving up 147 spots).

Ninety-eight percent of the charities studied are using at least one form of social media. Most use several. Eighty-one percent link their social media to their homepages, providing immediate access to all their outlets. In addition to those graphed below, other tools used include Vimeo, Flickr, iTunes, MySpace, Scribd and SlideShare. Many provide RSS, e-newsletters and mobile apps.

For these successful nonprofits, YouTube, web video and video blogs are the tools of choice for communicating with their constituencies with 97% using some type of video to help inspire their audience. Facebook enjoys popularity with 92% using it and Twitter is used by 86% of the charities studied. While these three platforms have strong usage across many sectors, it is interesting that nearly 3 in 4 of these nonprofits have boards on Pinterest and half are posting on Instagram.

Studies on social media in the business sector (Inc. 500 and Fortune 500) show much lower levels of usage of these particular tools even though their usage is increasing dramatically each year. Clearly, there is a significant boost through visual media and these causes are maximizing that. Some of the newer tools like Vine and SnapChat are also being used. 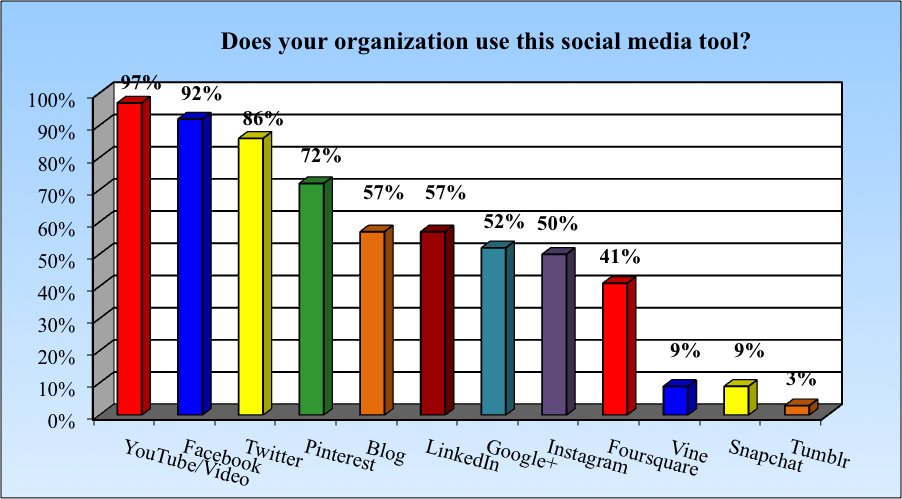 A new metric was added to Facebook in October, 2012. “People Talking About This” is the number of unique users who have created a “story” about a page in a seven-day period. On Facebook, stories are items that display in News Feeds. People Talking About This is an important metric because it emphasizes interactions beyond an initial Facebook Like. Pages that create posts that fans enjoy will benefit. When people interact with pages in ways that generate stories, pages reach an audience beyond their existing fan base. Again, National Public Radio leads the way with over 500,000 engaging with the organization on Facebook.

Twitter followers provide an important metric both internally and externally. Of the organizations studied, the Metropolitan Opera Association and the Wounded Warrior Project have the most followers, both with over 96,000.

Many of the charities studied appear to be a prolific tweeter. The Natural Resource Defense Council leads the way with over 39,000 tweets. The Heritage Foundation is second with 37,300.

Administrators were asked if their organization had a written policy governing the use of social media by their employees. Seventy-two percent of them report having such a policy. This is an important step in avoiding online crisis and firestorms often started by employees inadvertently causing havoc on social media.

Charities and nonprofits use social media to increase the awareness of their mission. Eighty-one percent cited awareness as their main objective online. Generating donations, soliciting volunteers and hiring employees all followed. 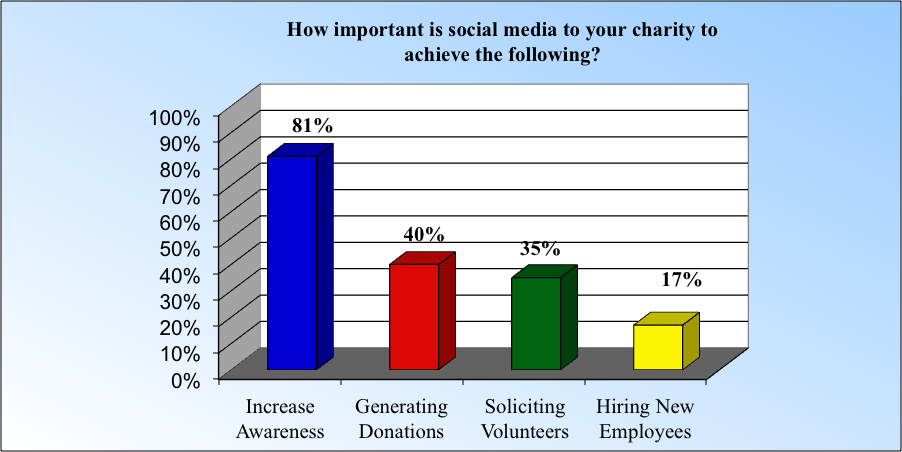 Even though generating donations is not the primary intent of their social media use, it is essential for their organizations to raise money. When asked how useful these new communications tools are specifically for raising money, 7 out of 10 felt they were useful while an additional 18% felt they were of limited use. Eleven percent did not feel that social media was useful for raising money for their organization. 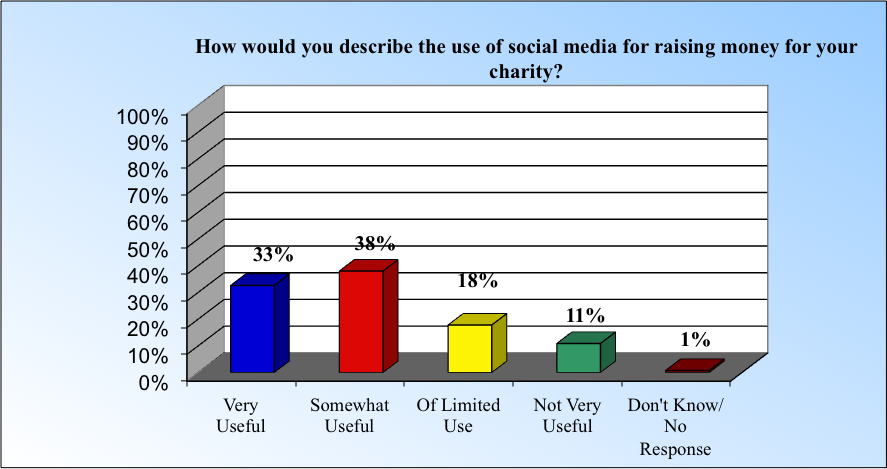 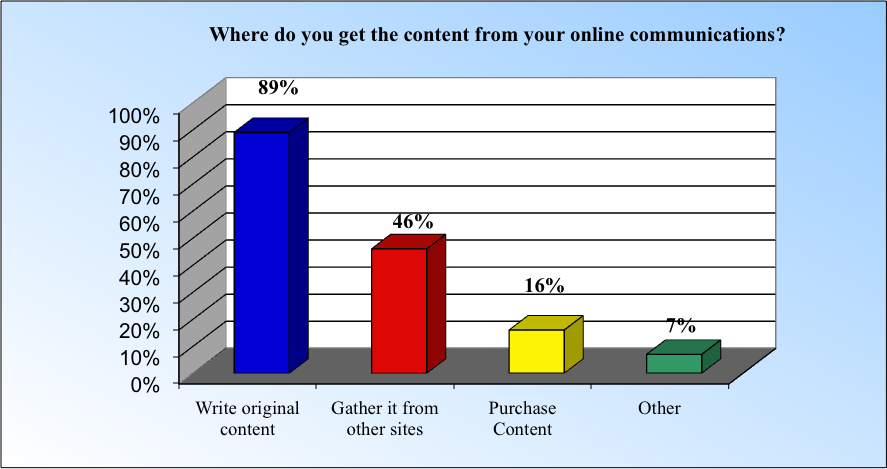 When asked how the social media efforts are managed, most had some internal people involved in these efforts. Thirteen percent had outside agencies that managed the social media of the organization. Some indicated they used volunteers or that their headquarters managed all social media. 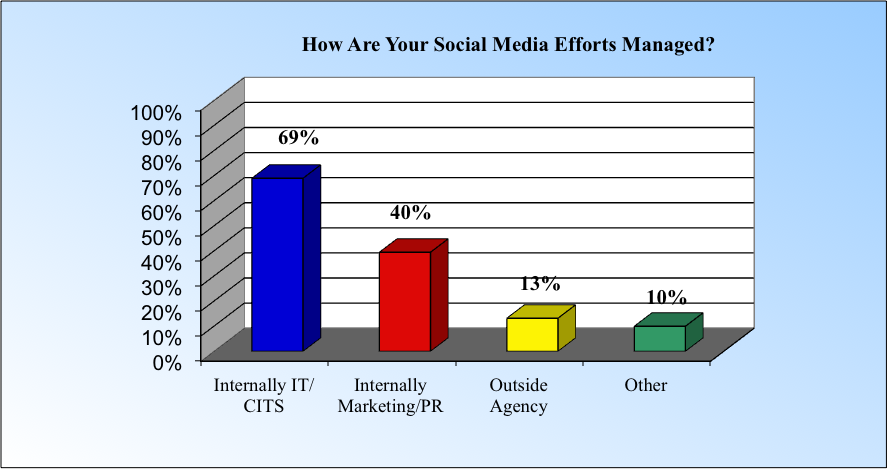 Measuring effectiveness of social media is critical to any organization. Popular metrics used by these top-performing nonprofits include hits, comments, posts, fans and followers. Some of the organizations studied use donations and publicity as indicators of effectiveness. 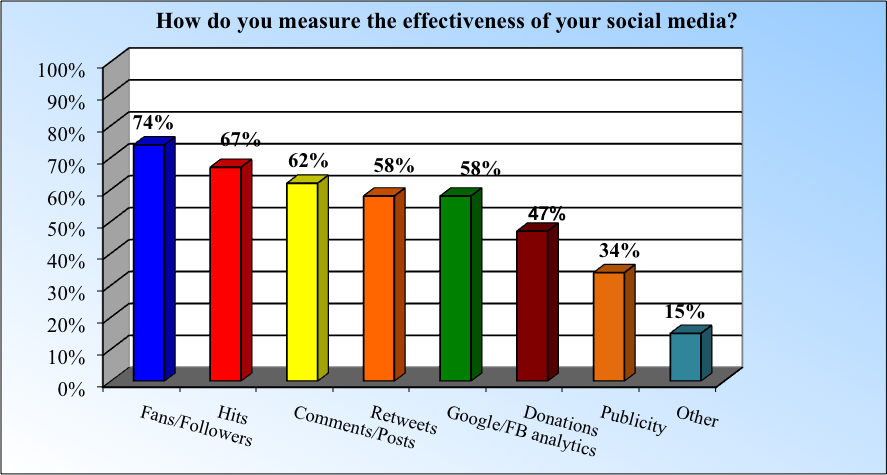 It is clear that charities are prolific users of social media. The next question is: Are they listening to what’s being said about them online? Eighty-three percent report that they monitor the Internet for buzz, posts, conversations and news about their organization. These organizations realize the importance of knowing what conversation might occur around their cause, their name, their location or constituents. They automate their searches using Google Alerts and use platforms like Radiant6, HooteSuite and Google Analytics to better assess their impact.

Forty-five percent of the organizations studied report using social media tools to recruit and evaluate potential employees/volunteers. Those groups use Google searches, LinkedIn as well as Twitter and Facebook to garner information for potential positions.

Top charities have mastered the use of social media to reach out to stakeholders, campaign on behalf of their organizations and build valuable relationships. They let their supporters know through YouTube, web and blog videos, Facebook, Twitter and the rest of the social web, all the good that their charity is doing. They utilize extensive visuals beyond YouTube, Pinterest and Instagram to tell their story. They provide original content and make it sharable. These savvy nonprofits are an inspiration to those looking for social media best practices. For constituents, seeing the cause played out in visual form is powerful, moving and effective.

Nora Ganim Barnes is a Chancellor Professor of Marketing and Director of the Center for Marketing Research at the University of Massachusetts Dartmouth. Nora has worked as a consultant for many national and international firms. Working closely with businesses in the Northeast US, Nora and her students have provided marketing research assistance to hundreds of small businesses.

She has published articles in academic and professional journals and proceedings, has contributed chapters to books, and has been awarded numerous research grants. Her work has been covered online and in print by Business Week, the NY Times, Washington Post, CNN, Reuters, Wall Street Journal, Fox News and Computer World among others. She has been named Co-chair of Research by the Society for New Communications Research.

Nora is a frequent speaker at corporate meetings and keynote at conferences and can be reached at nbarnes@umassd.edu.

About the Center for Marketing Research

The authors would like to thank those that made this report possible. The Philanthropy 400 organizations who responded to this survey were candid and generous with their comments. They represent all the qualities that make the study of new communication channels for businesses so exciting. Special thanks are also owed to the students from the University of Massachusetts Dartmouth Center for Marketing Research for their endless enthusiasm and dedication to this project.