Increases in Use of Instagram and Paid Social But Not Social Planning: Social Media Among the 2019 Inc. 500

BayCoast Bank White Paper Series: The effects of Social Medias use in Business

As social media becomes increasingly important to business success, the Center for Marketing Research at the University of Massachusetts Dartmouth continues to monitor its use. Each year, the Center conducts an in-depth study on the use of social media among Inc. Magazine’s top 500 companies. The list represents the fastest-growing, privately owned companies in the United States. The most recent findings build on the past 13 years of data on social media use in order to determine trends over time and across industries. This study is a valuable tool in understanding the most utilized channels of communication between companies and their customers. For the complete list of the 2019 Inc. 500 companies, including details and selected data, please visit Inc. Magazine’s website at www.Inc.com.

The study presented here focuses on the 2019 Inc. 500 and was conducted under the direction of researcher Dr. Nora Ganim Barnes. The findings are a result of both secondary data review and random telephone interviews of companies on the list. All data collection and interviews took place in the fall of 2019. The companies on the Inc. 500 list include a wide range of industries from Government Services, Health, and Food and Beverage. A total of 27 industries are represented on the 2019 list.

The data was collected in two stages. The first stage investigated which popular social media tools are being utilized. The tools studied include: blogs, LinkedIn, Facebook, Twitter, Instagram, and YouTube. The number of followers and “likes” were also recorded where appropriate. This data was collected primarily via the company’s website where most companies provide a link to the platforms they use. If no link was found on their website, search engines were used in an attempt to capture all accounts. The Inc. 500 ranking, revenue, and industry classification were recorded from the Inc. 500 website. This data was collected on all 500 companies.

The second stage of research involved interviewing a random sample of executives from the Inc. 500 list to gather information about their specific focus on issues such as concerns regarding social media use, perceived effectiveness, and the relationship between social media use and potential sales. In this year’s study, additional information was collected regarding employee engagement and the value of free vs. paid social media use. One hundred and forty-nine companies (30%) were interviewed in this stage.

Social media has developed rapidly, and companies continue to search for which platforms suit their needs. It is evident that certain platforms best fit the needs of certain industries more than others. Figure 1 depicts social media usage for the last three years among Inc. 500 companies. Ninety-five percent of the companies use at least one form of social media. This is an increase of 1% indicating that the use of social media among high-growth companies has reached significant saturation. Among the top five represented industries in the Inc. 500 is Government Services, an industry that has typically not had a strong social media presence. 89% of companies in the Government Services industry have an active social media presence vs. 95% for the entire cohort. 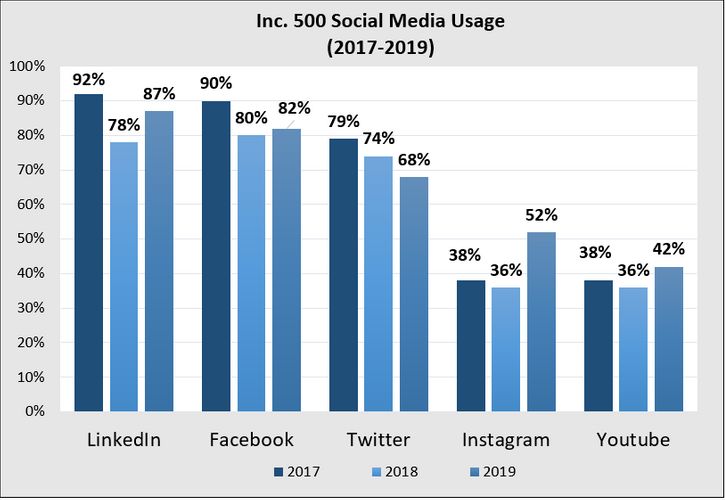 The data indicates some changes in the use of major platforms between 2017 and 2019. It may be that companies established their social media presence years ago and may now be reevaluating their presence on these platforms. In every case except Instagram and YouTube, usage has declined.

LinkedIn is the most utilized platform among the Inc. 500. Its adoption increased from 78% in 2018 to 87% in 2019. Facebook usage also increased over the past year from 80% to 82%. Possible explanations differ for each platform. LinkedIn facilitates business networking and hiring but has not been shown to impact sales. Facebook has had a troubled year with privacy issues, breaches, and threats of government regulation, but is a valuable vehicle for paid advertisement.

It is not surprising that Inc. 500 executives found LinkedIn and Facebook to be their most effective platforms.  Both have enjoyed that distinction for the past seven years of this research. Twitter is the third most utilized social media tool, as it is now adopted and maintained by 68% of companies, even though it is not viewed as an effective tool by the executives interviewed. 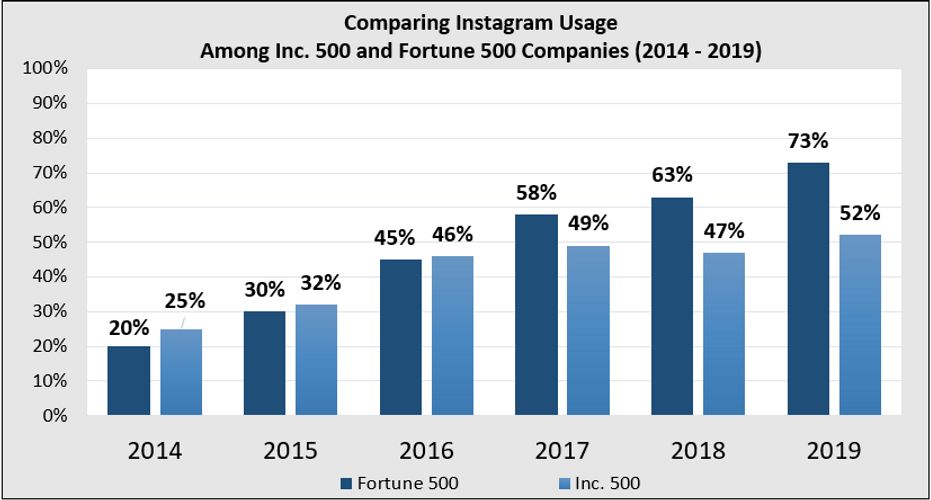 For the second time, a greater share of the revenue-based Fortune 500 companies utilized blogs compared to that of the Inc. 500 companies. Figure 3 below depicts the use of blogs in both segments from 2011 to 2019. The frequency of blogs has fluctuated in each year for both segments, and until 2018, the Inc. 500 consistently had higher usage rates. Currently, 54% of the Fortune 500 and 51% of the Inc. 500 use blogs to engage their audience. Both Fortune 500 and Inc. 500 experienced an increase in companies with public facing corporate blogs from the previous year. 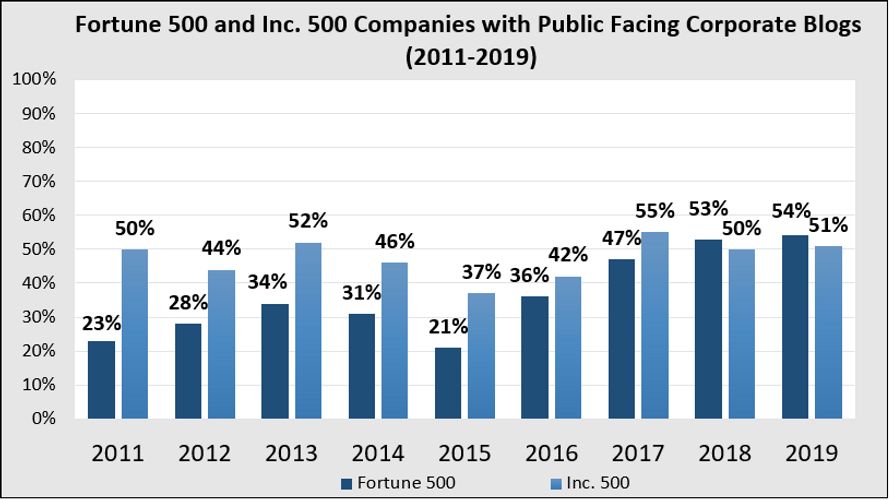 Twitter is one of the three most popular platforms in terms of active accounts behind Facebook and LinkedIn.  At the same time, it is considered one of the least effective social media tools by the executives who participated in our interviews. It may be that companies feel other tools give them more return in terms of brand awareness, thought leadership, engagement or sales/leads.  Those Inc. 500 companies with the most Twitter followers include Untappd with 131k followers, Limited Run (115k), BoxyCharm (113k), Gametime (43k), and BrillMedia.co (42k).

All executives were asked if their company monitors its brands, products, or industry information on social networking sites. Seventy-three (40%) of the executives interviewed indicated that they are tracking online conversations about their brands, products, or industry using a monitoring tool. This statistic is a 16% decline from 2018 and a 4% decline from 2017. Inc. 500 companies understand how important it is to be aware of the opinions and perceptions their customers share online. Their brand identity, and potentially their sales, are dependent on having a positive online presence. A lack of monitoring could have consequences for companies given the potential for viral communications possible through social media. As big data grows in importance, companies should start ramping up their tracking and monitoring of (potential) customer opinions.

Executives were asked to agree or disagree with statements about the effectiveness of their social media efforts. As they did in 2016 through 2018, almost all of them pointed to building brand awareness as the most effective use of social media. Consistent with last year’s findings, executives are least likely to agree that social media efforts have been effective for their companies. This again reinforces the belief that social media does not automatically result in increasing the bottom line. There is a 4% increase in companies agreeing that social media is effective in generating leads/sales. Percentages shown in Figure 6 are composed of both ‘Strongly Agree’ and ‘Agree’.

Executives interviewed were asked about concerns in their company regarding their use of social media. From 2015 through 2017, return on investment and resources devoted to social media were the top two concerns. However, in 2019, the top three concerns are return on investment and a tie between both resources devoted to social media and privacy issues. Legal and ethical issues are relatively less concerning. This change reflects the spotlight put on online privacy issues and social media in 2019.

Executives were asked what their company might be spending more on in the next year.  For the third consecutive year, websites are the spending target of choice for two-thirds of the Inc. 500. Email marketing, public relations, and paid social media are also priorities. The least targeted areas for increased spending are tracking software and print advertising.

Social media initiatives are developed, run, and managed by a company’s employees. Eighty-five percent of companies responded that employee engagement in the company’s social media efforts is beneficial. By incorporating greater employee insight into a company’s social media effort, the company broadens its view of customer needs and how to satisfy them. Therefore, by utilizing the effort and opinion of employees, a greater and more successful effort can be made via social media platforms. Fifty-seven percent of companies encourage their employees to discuss the company on their own private platforms. By using employees as representatives for the company, exposure may increase through what may be perceived as organic marketing: humans discussing a company or product through word of mouth. The individuals who are most knowledgeable and in the best position to promote a company or product are those who are employed at the company.

In the early years of this study, researchers focused on the adoption and use of particular tools/platforms. Our reports cited trends in the use of some tools noting declines in usage and surges in growth. The 2019 Inc. 500 appear to have a somewhat different profile in terms of social media with some declines in the overall use of social media as well as with some social media platforms. Additionally, interesting findings come from the interviews with Inc. 500 executives. Their conversations paint a picture of a shifting relationship between business and social media.

There are 338 companies with active Twitter accounts, yet only 3% of the executives described Twitter as the most effective social media tool/platform for their company. The 338 companies with active Twitter accounts are all making a consistent effort in maintaining the accounts with recent posts. This might be a contributing factor to the concern with ROI dedicated to social media.  Some are dealing with the feeling that being on the major social media platforms is essential and at the same time their reality is that these media may not benefit the company.

Furthermore, the issue of privacy has surfaced this year as a growing concern. As companies become aware of the value of collecting customer data, they become subjected to consumer data privacy laws that vary in different regions of the world. They also become wary of their own company data being targeted in some sort of online attack. The loss of company data could prove extremely costly whether through malicious use or through a lawsuit. The interviewed executives insisted that social media is effective in building brand awareness and have acted accordingly by increasing their propensity for creating social media plans or policies. When asked about plans for spending in the next year, they cite website improvements as their number one target, and include budgets for paid vs. free social media.

When asked what they would be spending more on in the next year, 53% of companies cited paid ads on social media sites. This is a 14% increase from 2018. While paid social media efforts are on the rise, social media planning has decreased.  19% of the 2019 Inc. 500 have a stand-alone social media plan, a 2% decline from the previous year.

The fast-growing companies of the Inc. 500 have established themselves on LinkedIn, Facebook, Twitter, blogs, and Instagram. They seem to have an idea of which platforms are effective for them and which are not. However, they continue to maintain even the least effective of them. They question if their social media efforts are providing a return. They believe that brand awareness is enhanced by these efforts, but sales may not be, particularly on certain platforms. It appears that the role of social media in business is being reevaluated. While companies are still active on social media, the majority believe that free platforms and tools have plateaued in the benefits they offer, thus requiring paid alternatives.  Social media deserves a seat at the table, but ROI can only be realized if businesses invest in what works and move away from what does not.