College universities are realizing the importance of social media and blogs to recruit a new population of students.

For the “always connected” generation, multi-tasking, hand-held devices and nearly constant communication are normal. It makes sense that their preferred method of communication is through their favorite social networking tools, accessible from their ever-present mobile devices.

In 2007-2008, fascinated by the dynamic created by all the new tools and habits of Millennials, the University of Massachusetts Dartmouth Center for Marketing Research conducted the first statistically-significant studies on the usage of social media by US colleges and universities. The study explored this fundamental question -- How does a college or university recruit in this new, highly networked, constantly “on” world? That study has been repeated every academic year since and now provides a longitudinal look at adoption of social media by colleges and universities.

The study has added new questions each year and some data is now collected every two years to allow for a more comprehensive view of the use of social media in US colleges and universities.

This latest study (2012-2013) analyzes the most recent trending of social media adoption among four-year accredited institutions in the United States. As in all previous studies, the colleges and universities were identified using a directory compiled by the University of Texas. Under the direction of researchers Nora Ganim Barnes and Ava Lescault, interviews took place from February to May of 2013 with those who managed the social media efforts at these institutions.

A proportional sample of schools in all 50 states was utilized resulting in 26% public schools, 71% private and 2% describing themselves as “for profit institutions.” They range in size from 40 to over 37,000 undergraduates. Tuition (without fees) ranged from $2,700 to over $55,000. Admissions officers at well-known schools like Loyola University, Rutgers University and Wake Forest University were interviewed as well as smaller lesser-known institutions in the US. The findings presented here are based on 474 interviews and are statistically valid within the range of +/- 4%.

The results are fascinating and continue to support what the 2007-2008 study documented for the first time: Colleges and universities are using social media, especially social networking sites, not only to recruit but some to research prospective students. It is clear that online behavior can have important consequences for young people and that these tools can, and will, be utilized by others to make decisions about them. Additionally, schools are now adopting an array of relatively new social media tools and demonstrating a more strategic approach to their online communications. In addition, top school administrators have taken to social media to communicate with current and perspective students.

An infographic version of this report is available here.

To be added to our email distribution list for all of our social media reports, please sign up on the right side of this page. 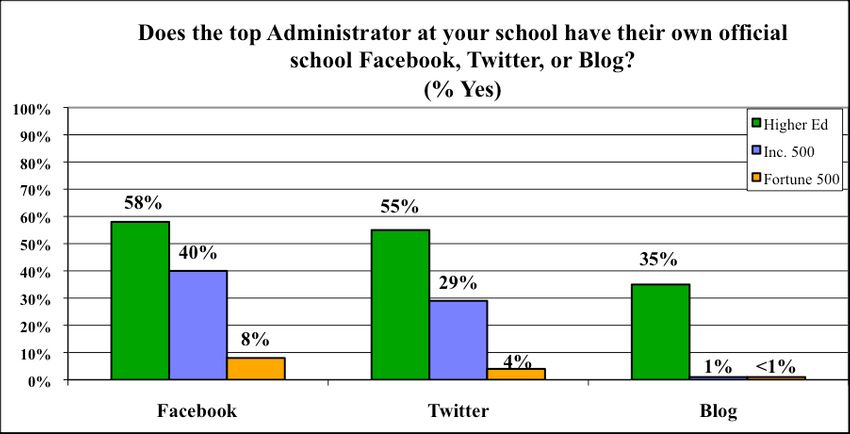 Nearly all of the colleges and universities studied are using some form of social media.

Exceptions are typically small schools dedicated to religious studies. Adoption of some tools was last queried two years ago. Newer tools were added for the first time this year including Google+, Pinterest and Instagram.

Over the past two years, for example, the use of Foursquare has nearly doubled (from 20% to 39%), LinkedIn usage climbed from 47% to 80%. Facebook, Twitter and YouTube saw increases up to 10%.

New to our study are Google+ (25% adoption), Instagram (16% adoption) and Pinterest (31% adoption). Usage continues to rise for the most popular tools while adoption of others shows an increased interest in visual presentations of schools. (See Figure 2)

Blogging continues to be embraced by colleges and universities but in a very different way than it was in 2007 when we began these studies. At that time, an official school blog was typically on the school’s home page or hosted by the Admissions Office. Over time, blogs proliferated on campuses with departments and other academic units hosting their own and even Admissions linking to student hosted blogs. There are blogs in some form running through Facebook pages, Tumblr as well as on WordPress. There are alumni blogs as well as those hosted by Athletics, Food Services, Student Services or internship blogs and blogs hosted by academic outreach centers on a campus.

The criteria for an official school blog that we’ve used in the past no longer applies as there are several things now in the mix. Generally speaking, about two thirds of US colleges and universities have some blogging activity of an official nature.

The adoption of social media by colleges and universities is being driven by their recognition of the increasingly important role of social media in recruiting students. When asked about the value of specific tools for recruiting, Facebook was cited as valuable by 93%, YouTube by 79%, Twitter by 71% and downloadable mobile apps by 40%. (See Figure 3) 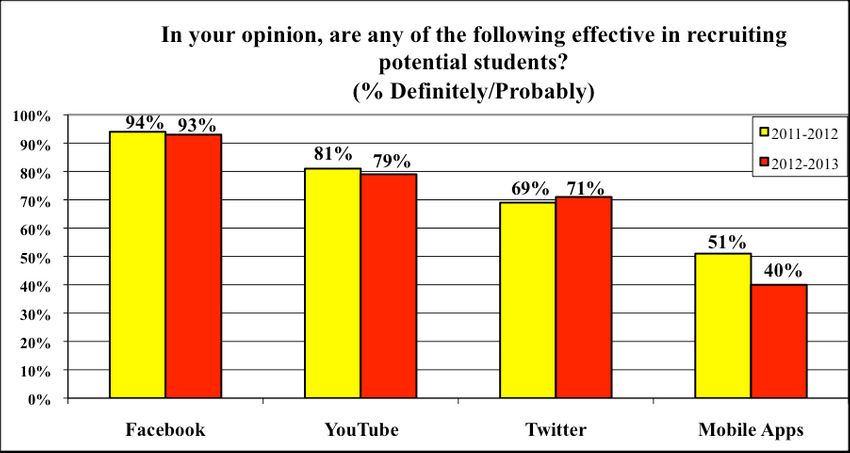 There is a slight increase of 3% in the number of school officials saying they can directly attribute enrollments to their social media efforts. Last year 38% believed they could and now 41% make that claim. (See Figure 4)

Thirteen percent of schools report researching students via social networking sites as part of the admissions process. Those 63 schools are more likely to be private (71% of the entire sample, 81% of those who view student sites). (See Figure 6)

When asked under what circumstances they looked at students’ social networking sites, the responses were varied. Some said they looked at every applicant while others only “occasionally” viewed them. Many said they looked online when questions arose about an applicant. Still others said they had very strict codes of behavior and wanted to be sure the student was a good fit for their school.

Most schools report looking for information about “the student’s activities or interests.” Many of them indicated looking for students by geographical region to target for their school. Online research appears to be a new tool for marketing from which colleges and universities garner information that helps them better focus their resources on perspective students that might be a good match with their institution.

There is also some indication of using these sites for evaluation. Social networking sites provide an insight into the lives of students that cannot be underestimated. As more and more young people spend increased amounts of time on these online networks, those interested in them (employers or schools) will continue to watch and read the publically available information and include their impressions in their decisions to accept or hire candidates.

The most popular measure of effectiveness for schools is the number of comments or hits they get on their sites or by fans and followers (89% vs 85%). Seventy-one percent of schools use page views and 63% report using Google Analytics. Forty-eight percent of schools are now doing student surveys asking students how aware they are of the school’s efforts and what tools are most useful for them. (See Figure 7) It is clear that schools are now communicating in new ways. The next question is: Are they listening to what’s being said about their school online? Unfortunately, this is one aspect of a social media program that becomes more and more neglected over time. Seventy-three percent in 2009 reported they monitored the internet for buzz, posts, conversations and news about their institution. In 2010-2011 that number dropped to 68%, then to 47% in 2011-2012. This latest iteration shows that the decline in monitoring activity continues and is now at 38%. (See Figure 8) 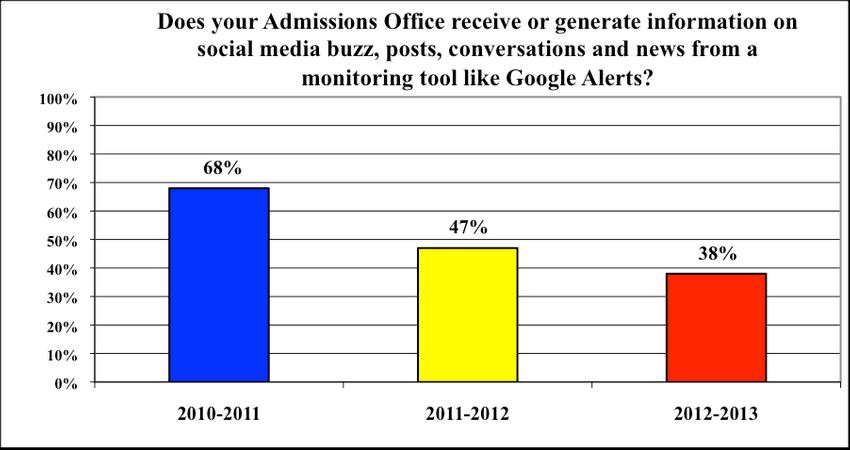 Given the ease with which monitoring can be done, it is surprising that all schools are not monitoring online buzz about their institutions. Regular monitoring would provide information about potential problems that might be avoided as well as important news about students, alumni or faculty who become part of the news. With the negative headlines that have involved some well-known colleges, it would be wise to use social media both to mitigate the damage as well as to monitor the brand.

One more red flag in the social media landscape is the lack of a written social media policy at US colleges and universities. Even though there is enormous activity, much of it by students, half of the schools surveyed do not have guidelines for acceptable online behavior or a process for online crisis management.

US colleges and universities are taking the lead in using social media as part of their marketing and recruiting plans. Some schools will use social media sites to garner more information about perspective students. They are evaluating the effectiveness of tools that were adopted early on and making decisions about which new tools to add into their communications strategy. The goal is clearly to reach and engage those tech savvy young people who may be making at least initial decisions about a school based on its online presence.

With so much social media activity on college campuses, from the top down, one has to wonder if it’s the social media recruiting strategy that is attracting young people or is it the culture of the campus that is communicated when a campus has its own social media rhythm. A campus that fully embraces social media may just have an advantage in the very competitive race for the top students.

Nora Ganim Barnes is a Chancellor Professor of Marketing and Director of the Center for Marketing Research at the University of Massachusetts Dartmouth.

Nora has worked as a consultant for many national and international firms including Thomson Reuters, Scott’s Lawn Care Company, National Association of College Admissions Counselors and the Board of Inquiry of the British Parliament. Working closely with businesses in the Northeast US, Nora and her students have provided marketing research assistance to hundreds of small businesses.

She has published articles in academic and professional journals and proceedings, has contributed chapters to books, and has been awarded numerous research grants. Her work has been covered online and in print by Business Week, the NY Times, Washington Post, LA Times, Wall Street Journal, Fox News the Huffington Post and Computer World among others. She has been named a Senior Research Fellow by the Society for New Communications Research.

Nora can be reached at nbarnes@umassd.edu.

Ava M. Lescault is Senior Research Associate and Associate Director of the Center for Marketing Research at the University of Massachusetts Dartmouth.

Ava graduated from UMass Dartmouth with a BS in Marketing and a Master's Degree in Business Administration with a concentration in Marketing Research. She recently completed a Certificate in Marketing Research from the University of Georgia. Ava has worked on approximately twenty-five extensive research projects and is a published author. Her clients include the cranberry industry, the shellfish industry, a national juice manufacturer, and a Fortune 500 company. She was the first person to hold the position of Senior Research Associate in the Center. Her areas of expertise include: SPSS analysis, database creation and manipulation, client interface, and report writing.

Ava can be reached at alescault@umassd.edu.