The Missing Link In Social Media Use Among Top MBA Programs: Tracking Prospects

A study tracking the use of social media to target prospective MBA students.

The Center for Marketing Research at the University of Massachusetts Dartmouth recently conducted an in-depth and statistically valid study on the usage of social media by the top MBA programs in the United States.

This new study builds upon the Center’s stream of social media research that has been ongoing since 2007. Previous studies have examined social media adoption and use by the Inc. 500, Fortune 500, Forbes list of the 200 largest charities and US colleges and universities. All social media studies can be found at http://www.umassd.edu/cmr.

Although social media adoption in US colleges and universities has been studied by the Center, these studies have been limited to use in undergraduate admissions offices. Graduate programs using social media have not yet been explored.

The list of top MBA programs in the US, for the purpose of this study, comes from the 2012 US News Best Business School Rankings. US News surveyed 441 MBA programs in fall 2011 and early 2012 to get the information used to determine their 102 top ranked schools. For more information, full rankings and detailed methodology used by US News please visit http://www.usnews.com/.

Data for this study was collected through telephone surveys with the 102 top ranked schools. Seventy schools participated in our phone interviews. Schools in this study are diverse in affiliation, geography and size and include the University of Chicago, Columbia, Rutgers, Yale, the University of Kentucky and Georgetown University. Fifty-six percent of the schools in our sample are public and 44% are private schools. For a list of participating schools, please see the last two pages of this report.

All interviews were conducted with the MBA Director, Assistant Dean for Graduate Studies or someone holding a similar position. The survey included questions on the use of social media expressly as a marketing strategy for the MBA program. Social media usage, measurement, monitoring and tracking at each school were queried along with how the social media function is implemented in the MBA office. All respondents were asked their level of agreement with statements related to the social media efforts of their school. Highlights of the study are followed by a detailed report of the findings.

Respondents, including both those who are currently using social media just for their MBA program and those who are not, were also asked which social media tools they plan to use in the future. Sixty-four percent of respondents plan to add or begin using at least one new social media tool or platform in the future. The most common tools respondents plan to add or begin using are Twitter (50%), Blogs (48%), LinkedIn (46%), YouTube (29%), Mobile Apps (25%) and Pinterest and News feeds each at 7%. Twenty-four percent reported using some other social media tools. Those cited most often include Digg, Delicious, Picasso, and Skype. 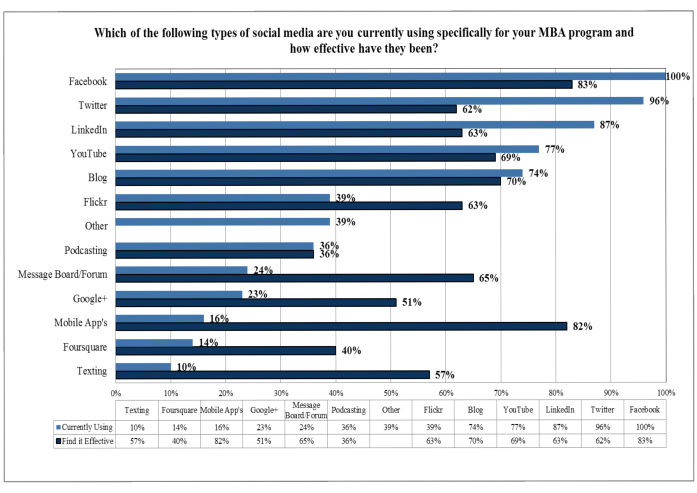 Reasons for Social Media Use and What Role it Plays

This study also examined the reasons behind social media use and how central a role social media plays in marketing and recruiting efforts. 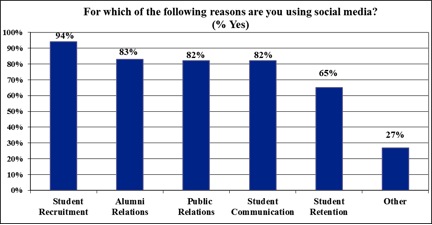 Respondents were also asked to identify additional uses of social media for their program. The most common responses were related to branding, community building, engagement and event promotion. Additionally, respondents were asked if they agreed that top MBA programs are expected to be using social media and 70% did agree that there was such an expectation among applicants.

Forty-one percent of respondents described social media as playing a critical or major role in their marketing efforts. Fifty-eight percent describe it as playing a moderate or minor role. There is clearly some difference of opinion, which may be related to the program’s ability to measure the outcomes or effectiveness of their efforts. (See graph below) 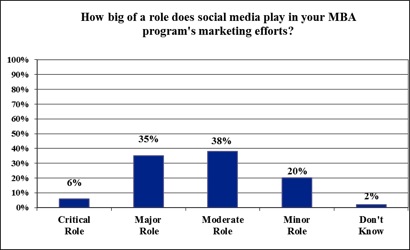 Virtually all respondents (97%) do currently measure the effectiveness of their social media efforts. While fans, followers and hits are among the most common measures used to assess effectiveness of social media programs, these measurements will not accurately calculate how many prospective applicants apply to a school as a result of using their social media. Other tools such as a “how did you hear about us” on the application, as well as software packages, allow schools to measure if social media is actually improving recruitment efforts.

Respondents were asked if their MBA program tracks online buzz, posts, conversations and news using a monitoring tool or automated alerts. The majority of respondents (65%) are currently monitoring buzz on their school/program but 1 in 3 do not. This could put a school at a disadvantage if negative or inaccurate information is circulating online and goes unchallenged. (See graph below)

Additionally, respondents were asked if they currently track the number of applications for their MBA program that come from perspective students using social media. Only 24% of respondents report tracking applications. (See graph below) 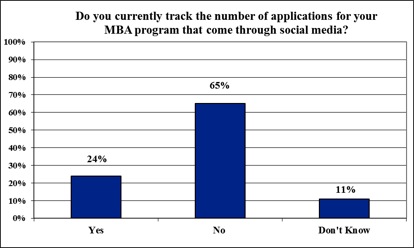 Respondents were also asked how their MBA office staffed their social media efforts. The majority (76%) have retrained or repositioned full-time employees, 35% employ students, 17% employ new social media hires, 15% do not employ anyone in the MBA office, 14% employ external consultants and 4% of respondents did not know or have some other arrangement. Private schools are more likely to employ external consultants to manage their social media presence than public institutions. (See graph below)

Respondents were also asked how their MBA office staffed their social media efforts. The majority (76%) have retrained or repositioned full-time employees, 35% employ students, 17% employ new social media hires, 15% do not employ anyone in the MBA office, 14% employ external consultants and 4% of respondents did not know or have some other arrangement. Private schools are more likely to employ external consultants to manage their social media presence than public institutions. (See graph below)

Sixty-two percent of respondents reported that their investment in social media is definitely worth it although when asked if social media cuts the cost of traditional advertising or marketing for their MBA program, respondents were evenly split.

This finding may indicate that while some schools are utilizing only free social media tools and making minimal investments, others may be paying for premium account subscriptions, advanced analytics, dedicated employees, external resources and/or paid social media advertising.

Those respondents who said they would increase their MBA program’s investment in social media over the next year were asked how they plan to increase their investment. Thirty percent plan to make new software purchases, 28% plan to invest in new training, 22% will make new hires, 11% plan to dedicate more staff time and money to social media, 6% plan to add apps or pages, 6% plan to hire outside consultants and 31% will invest in other ways. (See graph below)

The most common other ways respondents plan to increase their MBA program investment in social media are by increasing social media advertisements, looking for better analytics and investing in more content and videos.

It can be concluded from the findings of this study that the top MBA programs in the US are actively using social media to market their MBA programs. Recruitment is their number one objective. Those who are currently using social media do believe it is worth the investment they make in it and that it has a valuable impact on their MBA program. Seventy percent plan to increase their investment in this area over the next year.

The missing link appears to be tracking those who first become interested in the program through one of the program’s social media sites. Being able to measure whether these prospects actually apply to the program is something schools may be looking to do, but have not yet mastered. Without this piece of information it is difficult to really assess the effectiveness of the social media plan and to know where future investments should be made.

Measuring, monitoring and tracking appear to be areas where schools need to focus along with creating social media policies. These MBA titans have embraced the tools and now will compete to master and assess the impact of them. In this case, the winner may not only end up with the best students, but also those that are engaged in the program’s vision, its people and its brand.