The following research utilized a survey approach within a mid-sized public university in Northeastern United States, yielding a random sample of Generation Z students. As defined by Pew Research Center, those born from 1997 onward are considered part of Generation Z (Dimock, 2019). In 2019, this would make those part of Generation Z ages 22 and younger. Because “generational cutoff points aren’t an exact science,” this study collected data from students between the ages of eighteen and twenty-three to capture the entire undergraduate population of the university. The university has 6,879 undergraduate students. There are eight colleges within the university with 55 undergraduate majors. Only undergraduates were studied since typically graduate students are millennials and not the subject of this investigation. This approach provides the opportunity to understand the problem being investigated among the target demographic. The use of a survey enabled quantitative results and the discovery of links that are common between privacy concerns and Generation Z. A brief description of the variable measurement, sampling, data collection, and data analysis procedures are as follows.

Four hundred and sixty-nine surveys were collected within a two-week period. Of the 469 respondents in the sample, 60% are female, 38% are male and 2% identify as “other”. Eight percent are eighteen years of age, 26% are nineteen, 21% are twenty, 23% are twenty-one, 17% are twenty-two and 6% are twenty-three. The survey was implemented via mass email to undergraduate students. The email contained a brief background on the study and a direct link to the survey. The survey consisted of fifty questions and was approved by the IRB.

Generation Z, aka Gen Z, is estimated to comprise the largest segment of the US population (Business Insider, 2019). Having been raised on the internet and influenced by technology, Gen Z have been exposed to privacy concerns from a younger age than did their predecessors, causing it to become a more pertinent topic among this cohort. In fact, as technology advances and the Internet of Things grows rapidly, it is nearly impossible for Gen Z to withdraw from this “dataintensive world” (Forbes, 2019). In the succeeding research, it becomes clear that while privacy concerns among Generation Z is notably high, they continue to utilize the many technologies available to them. In particular, this study focuses on privacy concerns among Gen Z pertaining to social media, mobile payment services, and smart speakers.

The main drivers of selecting a social media platform among Gen Zs are whether their friends are on it (87%), followed by if they have good privacy options (77%) and if they have ever been part of a security breach at a close third (76%). The segmentation of gender shows that more females than males are driven to social media because their friends (66%) as well as other people/brands are on it (67%). Interestingly, 20% of respondents reported that they were unaware of the Facebook security breach that took place in 2017, yet 86% are on the platform. Gen Zs say that they care about privacy but are likely unaware of the risks involved with the platforms they are regularly using. 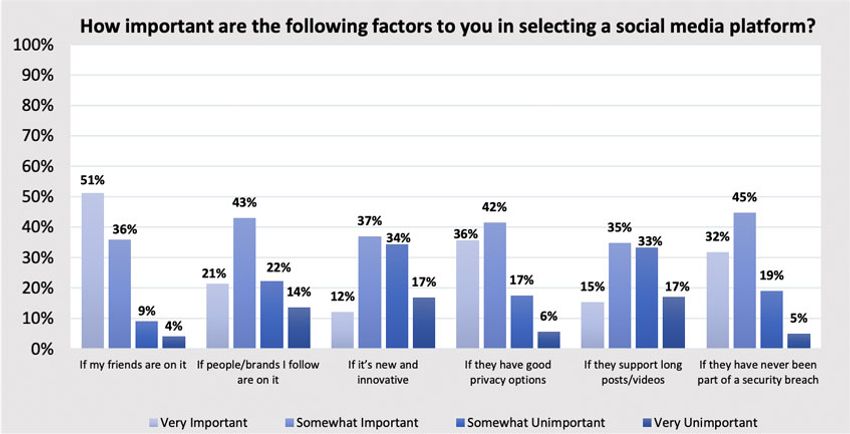 Despite Gen Zs lack of awareness of the Facebook breach, they are taking precautions when selecting privacy settings for the social networking platforms they utilize most. For the scope of this research, the top 4 social networking platforms utilized by Generation Z (Facebook, Twitter, Instagram, and Snapchat) were analyzed. The findings indicated that of the four, Snapchat had the highest percentage of private accounts among its users (83%), followed by Facebook (73%), Instagram (67%), and Twitter (42%). It is assumed that the intimate nature of a typical post on each respective platform drives the privacy settings for social media. A typical post on Snapchat, for example, can be viewed for a maximum of 10 seconds, and notifies users should they “screenshot” the content to save or view for a longer amount of time. Conversely, Twitter is a “micro-blogging” site intended to capture views from the masses, where the more likes/retweets a user gets arguably translates to greater social capital.

Forty-three percent of Gen Z also reported that they filter what they post because of privacy concerns pertaining to their personal information, along with 40% filtering what they post due to privacy concerns pertaining to their career. It’s important to note that respondents are college students who predominately have not entered the full-time workforce yet, exemplifying that Generation Z is concerned about how their current decisions may affect their futures. 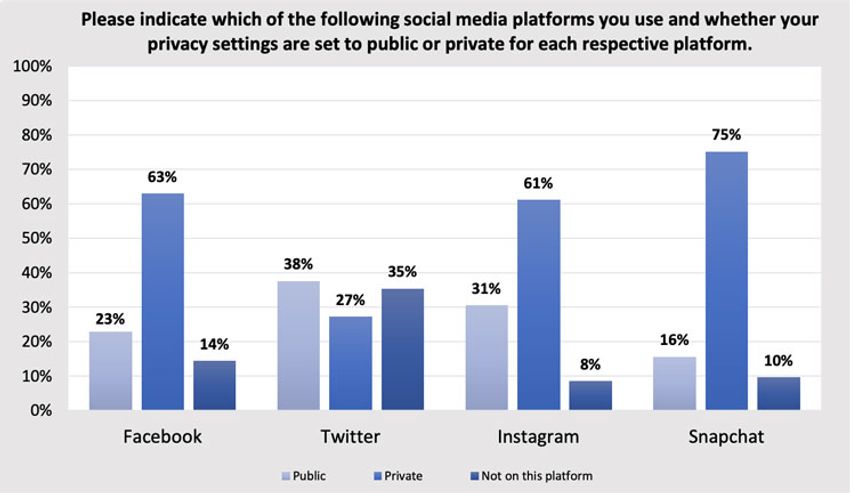 Social networking platforms have also adopted the use of facial recognition, which began in the 1960s as a means for law enforcement, airports, and retailers to fight crime and increase safety (West, 2017). Over the years, however, social media sites have adopted this technology to automatically identify, archive, and tag “friends” online to help build a larger web of connections. Gen Z is leery of this technology, with 27% reported being very concerned, and 47% reported being somewhat concerned that social media platforms are using facial recognition. 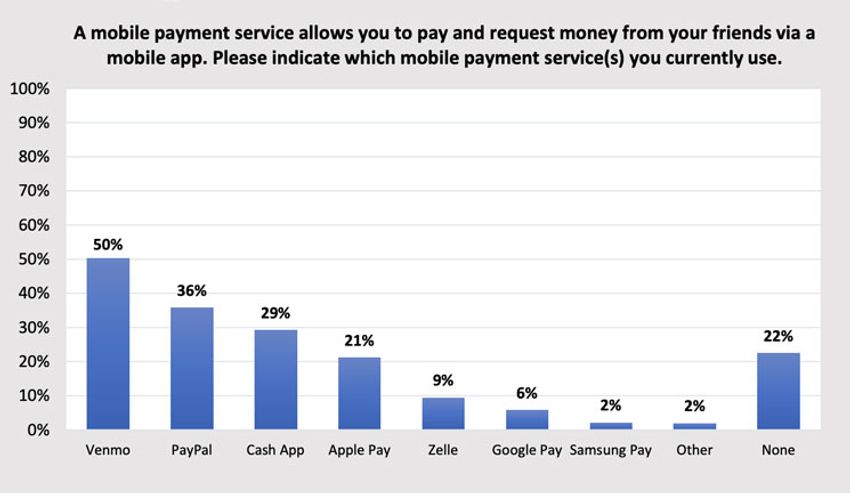 While more than three-quarters of Generation Z seem to be on board with the use of mobile payment services, their extensive use of these apps do not come without skepticism. Of those who use mobile payment services, 69% agreed that mobile payment apps are a target for scammers, along with 48% reportedly being worried that the apps are sharing their personal banking information with third-parties--- an alarming number considering 81% of those who use such services stated that it was a requirement to link their bank account information to use one or more of the platformsthat they currently utilize. It is interesting to note that when segmented by gender, research reveals that females are slightly more trusting than their male counterparts when it comes to the security of their personal information and money when using such apps. As a response to the aforementioned concern regarding the security of mobile payment services, 84% of those who currently use such mobile apps would definitely or probably prefer to use a mobile payment service app that was developed by their current bank over the services that are presently available, such as Venmo and Cash App. It is interesting to note, however, that despite the expressed concern among Gen Z pertaining to the vulnerability and the sharing of information via third-parties, 83% agree to some extent that their personal information is secure with the apps of their choosing, along with 92% agreeing that their money is secure. 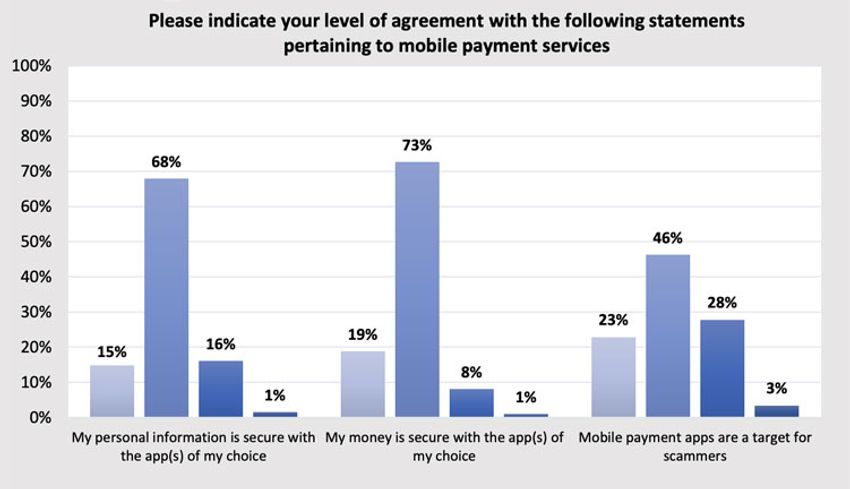 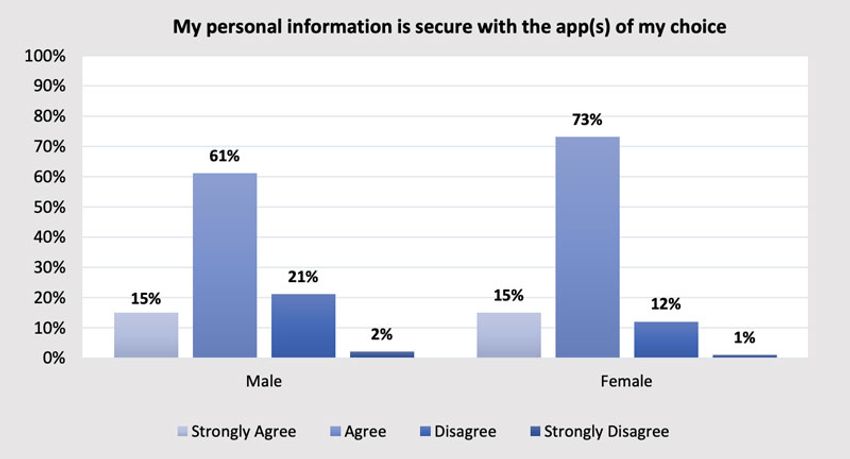 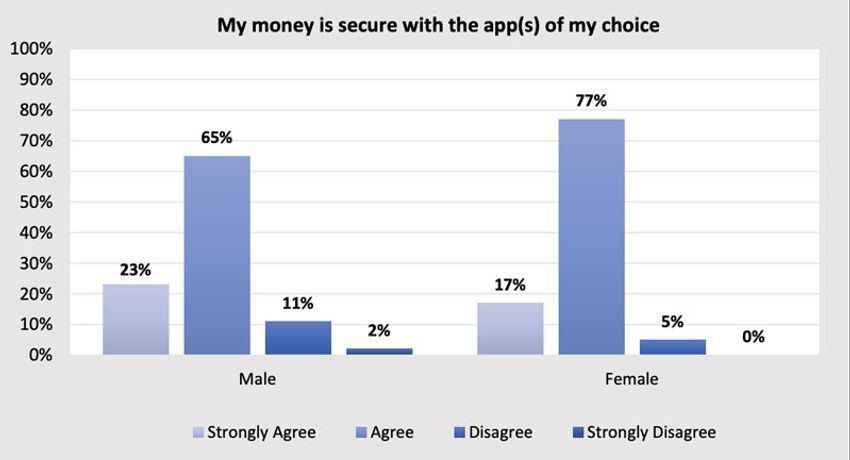 Generation Z, also known as iGen, is not only influenced by social media and mobile applications on-the-go, but also the use of smart devices in their homes. More specifically, the use of smart speakers seems to be a growing trend among this tech-savvy segment. According to LoupVentures (2019) a research-driven tech investment firm, an estimated third of US households will have a smart speaker at the end of 2019, which is expected to grow to a whopping 75% in 2025. Currently, 37% of the Gen Z surveyed reported having a smart speaker in their home. While the adoption of smart speakers is growing among this generation, it too has become the subject of privacy concerns. Of those who have a smart speaker at home, 31% show great concern that the ever-listening device is constantly awaiting its “wake-word,” followed by 33% with moderate concern, and 21% with slight concern. Thirty-six percent of Gen Z also reported a great level of concern, along with 28% being moderately concerned that the device might be capturing conversation while idle and not intentionally in-use. Fourteen percent report no concern at all when asked how they felt about the devices capturing unwarranted conversation. Adding to the discussion of privacy pertaining to these devices, 67% of respondents reported the speakers have responded to commands similar to its “wake-word,” leaving the door open for more unsolicited conversation to be captured unwantedly by these devices. Likely due to the sensitivity of these gadgets, 84% of Gen Z who have smart speakers in their home believe they are vulnerable to hackers. While these percentages are staggering, only 29% of Gen Z unplug their smart speakers when not in use. 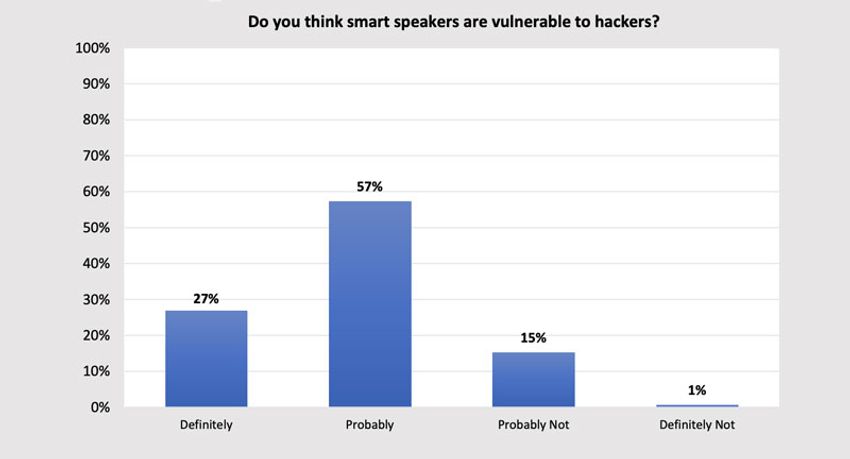 While Generation Z seems to be aware and moderately troubled by the many privacy concerns associated with the tech-immersed world they live in, it does not seem to impact the adoption of these apps/devices into their lives. Not having such conveniences are likely more of a burden to iGens than the risks they carry, therefore Gen Z would rather have accessto these connections and hope for the best by taking some level of precaution before proceeding i.e. use mobile payment service apps provided by their bank rather than third-parties. Eventually, it will become impossible to opt-out of using such devices and services, so it’s best for this generation to get onboard with what’s to come and equip themselves with the knowledge to utilize such technology appropriately. As this research indicates, there may be concern about privacy, but there is limited knowledge of widely covered breaches, and no real movement to stop using this new software and technology.

Business Insider. (2018, June 29). Gen Zs never watch TV, are stressed about Snapchat, and are concerned that technology has ruined their mental health — here's what it's REALLY like to be a teen in 2018. Retrieved from BusinessInsider.com: https://www.businessinsider.com/teens-gen-z-generationz-what-teens-are-like-2018-6#the-average-teen-got-their-first-smart-phone-just-before-their12th-birthday-2

Forbes. (2019, January 15). As Technology Advances, What Will Happen With Online Privacy? Retrieved from Forbes.com: https://www.forbes.com/sites/quora/2019/01/15/as-technology-advanceswhat-will-happen-with-online-privacy/#59e92b191c45