UMass Law’s newest class of students increased the law school’s enrollment to its largest ever while continuing to raise its academic stature with the highest median LSAT score and UGPAs in the school’s history.

The class was selected from a record number of applicants–well over 1,200–a 60% increase over the past four years.

Members of the Class of 2024 represent a worldwide geographic reach with students born in Asia, Canada, Europe, the Middle East, the Philippines, Russia, South America, and the United States. They hail from 24 states and Puerto Rico and represent nearly 100 undergraduate colleges. Their ages range from 19-59, 57% are women, and one-third of the class identifies as students of color.

"UMass Law is proud to continue its upward trajectory of academic quality with our incoming class,” said Dean Eric Mitnick. “Our record number of applications and geographic reach indicate that students throughout the world recognize the UMass brand. UMass Law's program of affordable and exceptional legal education, along with our mission to pursue justice, also resonates with our newest law students."

“Our record number of applications and geographic reach indicate that students throughout the world recognize the UMass brand. UMass Law's program of affordable and exceptional legal education, along with our mission to pursue justice, also resonates with our newest law students." 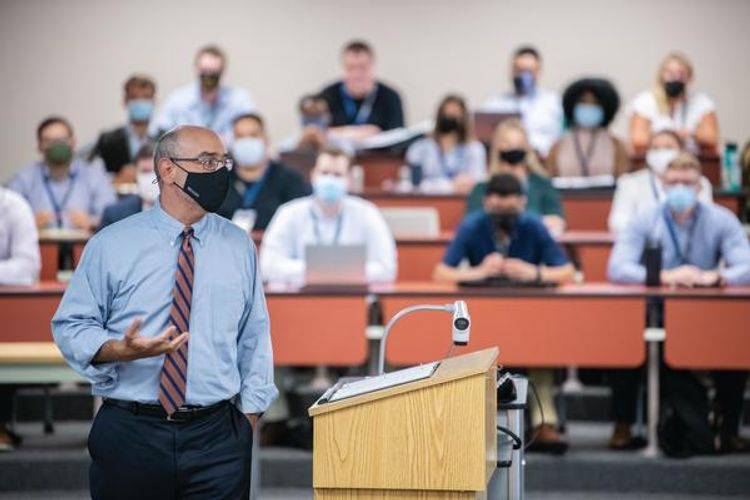 He has taught Evidence and Trial Practice at UMass Law since 2019. Recuperating from surgery, Justice Georges will begin teaching remotely this semester and planned to address the class via Zoom at the conclusion of their orientation.

“But just last night, he told us that he was going to find a way to be here, in person, with all of us, with all of you because of how strongly he identifies with our mission. There is a critical lesson for all of us in that sort of fortitude and determination: the ability to overcome obstacles is critical both in law school and in your legal careers,” said Dean Mitnick in introducing Georges.

In addressing the students, Georges inspired them to be on the offensive when facing challenges. “Do you want to be great? Then act great and with great empathy–do what great people do and make others great,” he said. “You want to lead? Then lead courageously and remember you are not a leader until you have created other leaders.

“You want to win? Realize that every day that you get up and are afforded another day’s opportunity that you have won. And always remember that someone else does not have to lose so you can win. There is room for us all to be successful. You want to be of value? Then go out and make yourselves invaluable by going beyond what is asked.”

He led the students in reciting The Lawyer’s Pledge, an oath of professionalism to uphold the high ideals of the legal profession, academic honesty, and professional conduct. 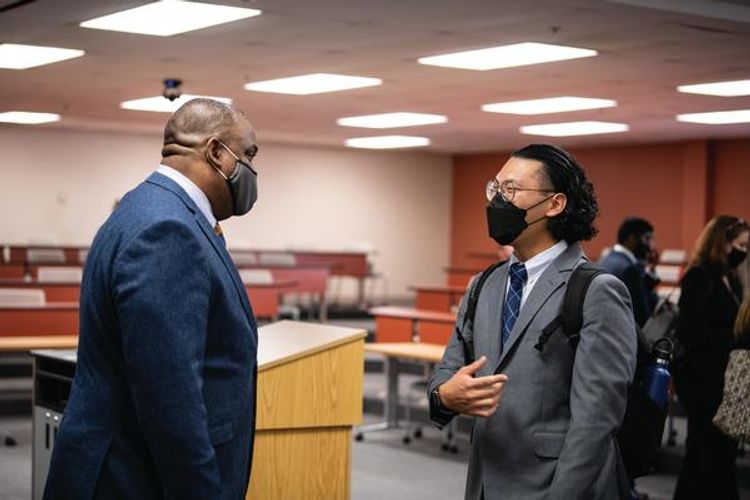 While 1L students are excited to begin law school, 2Ls are thrilled to be on campus

Following the traditional 1L class photo on the first day of orientation, Chace Montano of Phoenix, AZ, said that law school has been her goal for a long time. “It feels so good to finally be here and make an impact in a truly meaningful way as a law student. It’s so nice to be surrounded by faculty who truly care about your education and the difference you are going to make in your career,” she said.

“This is so exciting,” said Kim Croce of Amesbury, MA. “It feels like all the work I put in for the LSAT has finally paid off. The people here really care that you do well.”

Christopher Tetreault of Fall River, MA, a 2020 graduate of UMass Amherst, said, “It feels good to be on campus. The atmosphere is a collaboration rather than a competition. I really resonate with the message of this school about public service and being the only public law school in MA.

“I like how everyone was so helpful. It’s a very calming environment. I really appreciate what the professors were talking about in that it’s always a journey, you’re always learning,” added Tetreault, who hopes to work in international human rights law to help those affected by global change.

Michael McMurtry of Pebble Beach, CA, wanted to attend law school on the East Coast for the New England experience. The son of a public defender, he hopes to become a district attorney. “It’s been a great day. It’s really exciting to be here,” he said. “I met some really awesome people. It’s helpful to hear that you’re going to be OK, that you don’t have to be perfect every day.”

While the 2Ls already experienced orientation and their first year of classes online last year, they are finally able to meet their classmates and professors in person.

“It feels a lot better to meet your classmates and get to know more about them,” said 2L Aaron Druyvestein of Fairbanks, Alaska. “I’m finding being on campus a lot of fun and less stressful. We work together as a group more and we feed off the energy of each other and our professors. The faculty are so friendly and willing to start a conversation to get to know you.”

“I love it,” said Riana Yaman of Lebanon. “It’s nice to be able to socialize. Everyone is happier. Classes are less intimidating in person. And, it’s nice to be in the same time zone.” 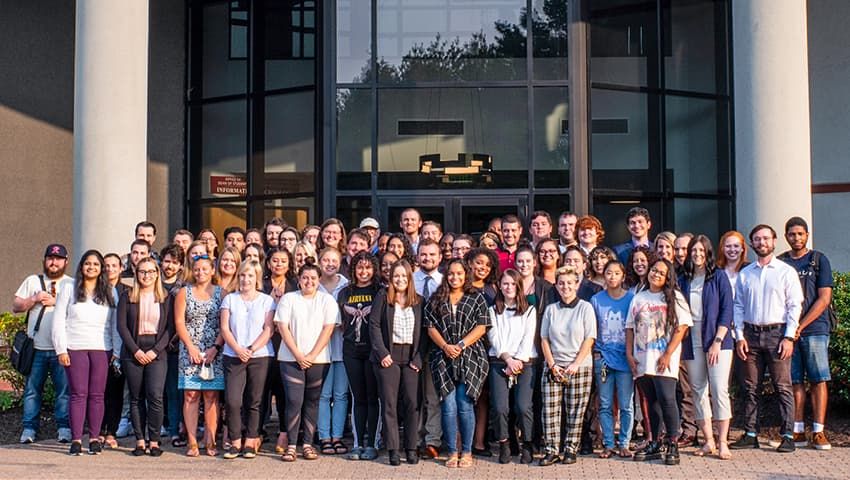 UMass Law's 2L class is happy to be on campus and meet their professors and classmates following a year of remote classes.

Day of service at Sharing the Harvest Farm

Members of the incoming class also volunteered at Sharing the Harvest Farm weeding, planting, and harvesting at the nonprofit community farm that donates food to those in need along the SouthCoast. They were joined by Assistant Deans Cahill and John Quinn.

“Spending the morning at Sharing the Harvest farm was a major highlight of my orientation week at UMass Law,” said Alanna Levy of Needham, MA. “I decided to volunteer because I wanted to continue to get to know my new classmates and UMass Law faculty and staff outside of the classroom. I was also drawn to the farm’s initiative to fight food insecurity on a local level. It was important and impactful to me that UMass Law chose to be a part of this initiative.”

Jason Lee of Merced, CA, said he was glad he attended the event “as I made new friends at the farm. Fast forward, some of the people I study with now are those who I met at the volunteering experience. Growing up in a city, I realized that this experience was very calming, and I would like to go volunteer with my friends again.”

“I enjoyed volunteering, and I am grateful to UMass Law for taking the time to organize the event and transportation. The time outside of the law school allowed me to get to know my classmates in a different setting,” said Jordan Lambdin of Sparks, NV. 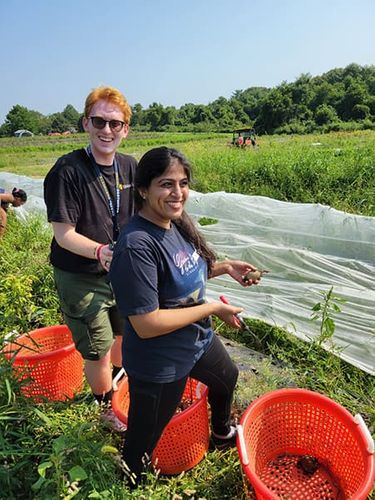 “Our record number of applications and geographic reach indicate that students throughout the world recognize the UMass brand. UMass Law's program of affordable and exceptional legal education, along with our mission to pursue justice, also resonates with our newest law students."