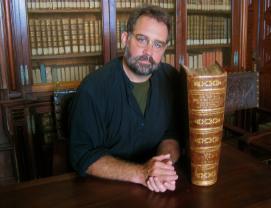 Dr. Timothy Walker (B.A., Hiram College, 1986; M.A., Ph.D., Boston University, 2001) is a professor of history at the University of Massachusetts Dartmouth.  At UMD, he serves as Fulbright Program Advisor (faculty and students); prior posts include Director of Tagus Press and Director of the UMass in Lisbon Study Abroad Program. He is a member of the graduate faculty of the Department of Portuguese and an affiliated faculty member of the Center of Indian Studies and the Department of Women’s and Gender Studies. Walker is also an Affiliated Researcher of the Centro de História de Além-Mar (CHAM) at Universidade Nova de Lisboa, Portugal. From 1994 to 2003, he was a visiting professor at the Universidade Aberta in Lisbon. During Fall term 2010 Walker was a visiting professor at Brown University. In September 2018 he was appointed Guest Investigator at Woods Hole Oceanographic Institution.

Walker serves on the editorial board of the journal Social History of Medicine. He is the recipient of a Fulbright dissertation fellowship to Portugal (1996-1997), a doctoral research fellowship from the Portuguese Camões Institute (1995-1996), and a NEH-funded American Institute for Indian Studies Professional Development Grant for post-doctoral work in India (2000-2002). Walker has also been named a fellow of the Portuguese Orient Foundation (Fundação Oriente), the Luso-American Development Foundation (2003 & 2008), and has held a Wellcome Trust Travel Grant to the Wellcome Trust Centre for the History of Medicine at University College, London (Spring 2003).  Walker also worked as a Lisbon-based researcher (1999-2001) on the Atlantic Slave Trade CD-Rom Database Project (Cambridge U. Press; D. Eltis, S. Behrendt & D. Richardson) and on the Global History of Leprosy Project, Wellcome Unit for the History of Medicine, Oxford University (2003). During the 2003-2004 academic year, Walker taught for the University of Pittsburgh Semester at Sea program.  From 2005 to 2007 he held a U.C. Davis/Mars Research Fellowship while working on the “Colonial Chocolate Project,” coordinated through the University of California Davis Department of Nutrition.  He remains a consultant for the Historical Division of Mars, Inc.  In 2007, Walker was named a senior researcher on a National Science Foundation-funded project to study the competitive sharing of contested religious sites around the globe (2007-2011).  Beginning in December 2010 he held a fellowship from the Gulbenkian Foundation in Lisbon, Portugal, to support the writing of a new monograph on Indo-Portuguese colonial medicine and hybridized medical culture. Walker was named a National Endowment for the Humanities Fellow (July 2012-June 2013).

Teaching fields include Early Modern Europe, the Atlantic World, the Portuguese and their empire, maritime history and European global colonial expansion. Current research topics include the adoption of colonial indigenous medicines by Europeans; climate data derived from colonial-era archival documentation; slave trading in the Atlantic and Indian Oceans; as well as commercial and cultural links between the Portuguese overseas colonies in Asia, Africa, and the Americas.

Doctors, Folk Medicine and the Inquisition:  The Repression of Magical Healing in Portugal during the Enlightenment. Leiden: Brill Academic Publishers, 2005.

"Some Observations about Medical Practice and Culture at Lisbon's Todos-os-Santos Hospital during the Enlightenment Era." Cadernos do Arquivo Municipal, 2a série, no. 11 (Jan-June 2019), 11-26.

"Medicinal Mercury in Early Modern Portuguese Records: Recipes and Methods from Eighteenth-Century Medical Guidebooks." In Histories of Mercury in Medicine across Asia and Beyond. Special issue of Asiatische Studien/Études Asiatiques 69:4 (March/April 2015), 1017-42.

“The Medicines Trade in the Portuguese Atlantic World:  Dissemination of Plant Remedies and Healing Knowledge from Brazil, c. 1580-1830.”  In Mobilising Medicine:  Trade & Healing in the Early Modern Atlantic World, a special issue of The Social History of Medicine 26:3 (2013).

“Intersecting Religioscapes:  A Comparative Approach to Trajectories of Change, Scale, and Competitive Sharing of Religious Spaces” (co-author with Dr. Robert Hayden; University of Pittsburgh).  In the Journal of the American Academy of Religion 81:2 (2013).

“Atlantic Dimensions of the American Revolution:  Imperial Priorities and the Portuguese Reaction to the North American Bid for Independence (1775-1783).”  In the Journal of Early American History 2 (2012), pp. 247–285.

“Slave Labor and Chocolate in Brazil:  The Culture of Cacao Plantations in Amazonia and Bahia (17th-19th Centuries).”  In a special issue of the journal Food and Foodways, Carole Counihan and Allen Grieco, eds. (Taylor and Francis, June 2007).

“Abolishing the Slave Trade in Portuguese India:  Documentary Evidence of Popular and Official Resistance to Crown Policy, 1842-1860.”  In Slavery and Abolition, Vol. 25, No. 2. London: Taylor and Francis, Ltd., 2004.

"Remedies from the Carreira da  Índia:  Asian Influences on Portuguese Medicine during the Age of Enlightenment."  In The Portuguese Studies Review, Vol. 9, Nos. 1-2, 2001.

"Slaves, Free Blacks and the Inquisition in Early Modern Portugal:  Race as a Factor in Magical Crimes Trials."  In The Bulletin of the Society for Spanish and Portuguese Historical Studies, Vol. XXV No. 2, 2000.

“Physicians and Surgeons in the Service of the Portuguese Inquisition: Twelve Years After,” in Medicine and the Inquisition in the Early Modern World, Maria Pia Donato, ed. (Leiden: Brill Academic Publishers, 2019).

“Crown Authorities, Colonial Physicians, and the Exigencies of Empire: The Codification of Indigenous Therapeutic Knowledge in India and Brazil during the Enlightenment Era,” in Drugs on the Page: Pharmacopoeias and Healing Knowledge in the Early Modern Atlantic World, Matt Crawford and Joe Gabriel, eds. (University of Pittsburgh Press, 2019).

“The Role and Practices of the Female Folk Healer (Curandeira, Saludadora and Parteira) in the Early Modern Portuguese Atlantic World.” Contribution for the edited volume: Women in the Iberian Atlantic World (1500-1800); Sarah Owen and Jane Mangan, editors (Louisiana State U. P., 2012).

“Supplying Simples for the Royal Hospital:  An Indo-Portuguese Medicinal Garden in Goa (1550-1830).”  In The Making of the Luso-Asian World:  Intricacies of Engagement, Laura Jarnagin, ed.  (Singapore:  The Institute for Southeast Asian Studies, 2011).

“Acquisition and Circulation of Medical Knowledge within the Portuguese Colonial Empire during the Early Modern Period.”  In Science, Power and the Order of Nature in the Spanish and Portuguese Empires (edited volume), Daniela Bleichmar, Kristin Huffine, Paula De Vos and Michael Sheehan, eds. (Stanford University Press, 2009).

“Physicians and surgeons in the service of the Inquisition: the nexus of religion and conventional medical training in enlightenment-era Portugal.” In Medicine and Religion in Enlightenment Europe (edited volume), Ole Peter Grell and Andrew Cunningham, eds. (Ashgate Publishing, 2007).

"Evidence of the Use of Ayurvedic Medicine in the Medical Institutions of Portuguese India, 1680-1830." In Ayurveda at the Crossroads of Care and Cure.  Lisbon: Universidade Nova de Lisboa, 2002.

"The Role of Licensed Physicians and Surgeons in the Inquisition and at Court during the Reign of João V." In Discovery, New Frontiers and Expansion in the Luso-Hispanic World. The Mediterranean Studies Association, 1999.

1. “Contesting Sacred Space in the Portuguese Estado da Índia: Asserting Cultural and Political Dominance Over Religious Sites during the Conquest of Goa.”  Article manuscript is under review for publication in the journal South Asian Studies (revised & resubmitted; summer 2018).  [Research done for the Project: “Antagonistic Tolerance:  A Comparative Study of Competitive Sharing of Religious Sites”:  http://www.ucis.pitt.edu/antagonistictolerance/AT_Main_Page.html]

Building on the success of the ACRE and Old Weather projects, we will recover, quantify, and analyze climate records from Portuguese and American whaling archives. With colonial outposts around the Indian Ocean rim and regular shipping traffic between them, the Portuguese observed and recorded regional weather conditions.  Using Portuguese colonial archival sources in India and Portugal, and U.S. whaling logbooks held in New England, climatologists and historians can potentially push global weather data back over 500 years, with a much broader geographical distribution than is currently available. Status: Revise and resubmit in Fall 2018.

4. Co-Editor and founder (with Dr. Timothy Coates, College of Charleston): “Classic Histories in Translation from the Portuguese-Speaking World” Book Series; Tagus Press at UMASS Dartmouth. Distributed by the University of Massachusetts Press.

This series publishes (in English) important Portuguese-language texts and manuscripts from the sixteenth to nineteenth centuries that shed light on the period of Portuguese maritime expansion and global interaction (texts from Asia, Africa, South America, and the Atlantic Islands).

University of the Azores Mobility Program Antero de Quental/Luso-American Development Foundation Grant for research at the Regional Archives of the Azores (2009-2010).