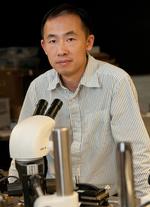 Dr. Yifei Li received his B.Eng. in Optoelectronics from Huazhong University of Science and Technology, China, in 1996. He received his MS (2001) and PhD (2003) in Electrical Engineering both from Drexel University, Philadelphia, PA. From 2003 to 2007, he was a research faculty with the Center for Microwave-Lightwave Engineering, Drexel University. In 2007, he joined the ECE Department of the University of Massachusetts Dartmouth, where he is an associate professor and the director of the RF Photonics Lab. Dr. Li is a visiting faculty with the Optoelectronic Research Group in the University of California Santa Barbara. Dr. Li has four US patents in the area of RF Photonics. He has numerous publications in renowned technical journals and international conference proceedings. Dr. Li was a winner of European Microwave Association (EuMA) Young Scientist Prize (1st prize) during the 12th Colloquium on Microwave Communications held in Budapest, Hungary. He was a winner of 2008 DARPA MTO Young Faculty Award. As a PI or co-PI, Dr. Li has led 10 competitive federal grants with combined funding of ~ $4.5M.
Yifei Li UMassD Profile

Find us on the map