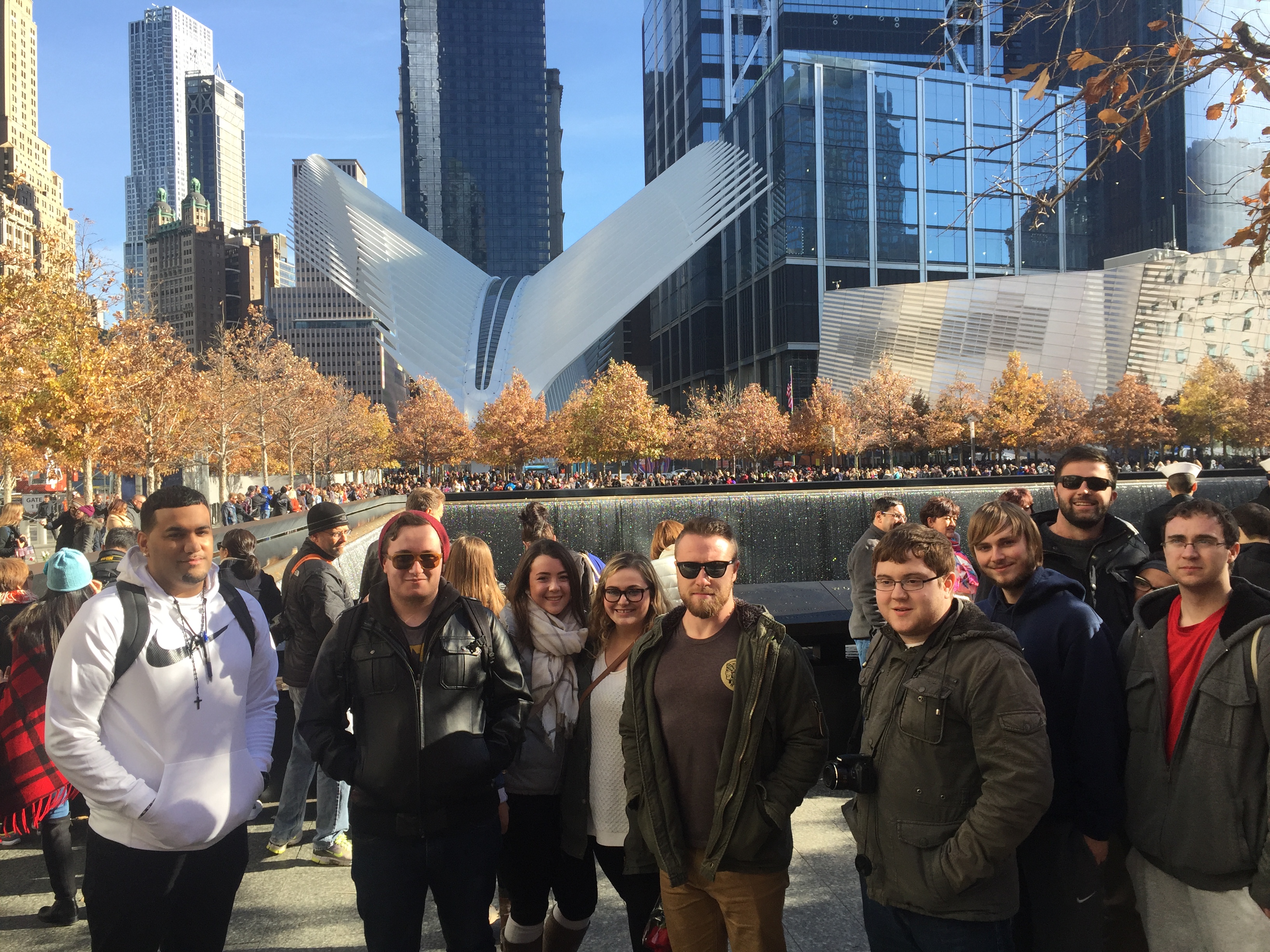 This semester UMass Dartmouth History Professor Brian Williams led more than 40 students and alumni on an excursion to Ground Zero in New York City. Williams wanted to help engage his students from his Warfare and Terrorism class.

They've been intensely studying 9/11, its causes and ramifications, and its connections to the violent and political turbulence that has arisen in Afghanistan, Iraq, and Syria.

“I think this journey will help show that our students are not impervious to larger events or past tragedies,” said Williams. “On the contrary, they are vitally involved and linked to them.”

The first of several monuments

Williams led his students to several different sites, the first being the America’s Response Monument. The monument was dedicated to the elite Green Beret Special Forces, who led the operations in Afghanistan that overthrew the Taliban in 2001.

I wanted to transform 9/11 from a distantly remembered abstract event to something real and human.

Students were able to meet a Green Baret who toured in Afghanistan, as well as the fire chief who was inside of the burning buildings at the time of the tragedy. “Meeting people who were there gives so many levels of depth, truth, and understanding that no textbook can give,” said biology major Lance Rufino '18.

The group also visited the massive underground 9/11 museum-vault which preserves items related to the tragic event, including parts of the original World Trade Center and personal items belonging to the victims killed.

“The further we trekked in to the museum, the more difficult it became to hold back tears,” said Justin McKinney '18, a crime and justice studies major. “We saw engines from planes that were downed by hijackers, entire fire trucks ripped to shreds by the debris from the falling tower, and maybe most powerfully, the pictures of all the people who did not make it out of the towers.”

A time for reflection

After a stop by the reflection pool—which sits at the site of where the old World Trade Center had once stood—Professor Williams and his students stopped to discuss everything they’d observed.

The trip served as a defining moment for Williams’ students to connect to their studies in the classroom but also to immerse themselves in one of the most defining moments of the 21st century. “I wanted to transform 9/11 from a distantly remembered abstract event to something real and human,” said Williams.

For Lance Rufino, the trip helped turn history into a reality. He was able to gain a perspective that only a few of his peers can actually say they have.

“Reading about the events of 9/11 gives you an in-depth explanation, but it can never portray the painted picture with the immense detail and perspective of the people who experienced that dark day,” said Rufino. “Being able to meet these veterans with completely uncensored histories was an experience that very few are honored of being able to receive.”

Chelsea Cabral '18 contributed to this story.

I wanted to transform 9/11 from a distantly remembered abstract event to something real and human.