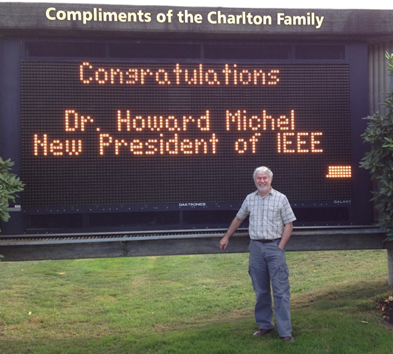 Dr. Howard E. Michel was selected as 2014 IEEE President-Elect in October 2013. Howard is an Associate Professor of Electrical and Computer.  He has secured research funding from U.S. NSF and NOAA.  He holds two patents and has published a textbook. He has graduated 3 Ph.D. and 35 MS students.

Howard retired from the U.S. Air Force in 1994, having been a pilot, satellite launch director, and engineer, including in the People’s Republic of China where he served as a senior U.S. Government technical representative enforcing technology-transfer control plans and procedures during two satellite launches.  Other achievements include successfully launching seven U.S. satellites by directing launch-base test and integration involving booster, satellite, and telemetry-range hardware; and developing U.S. Department of Defense engineering processes for mission-critical computer systems. Howard is a consultant for the U.S. DoD and private industry in the area of embedded systems, avionics, instrumentation and systems engineering.

IEEE, the world’s largest technical professional association, is dedicated to advancing technology for the benefit of humanity.  Through its highly cited publications, conferences, technology standards, and professional and educational activities, IEEE is the trusted voice on a wide variety of areas ranging from aerospace systems, computers and telecommunications to biomedical engineering, electric power and consumer electronics.  Learn more at http://www.ieee.org.