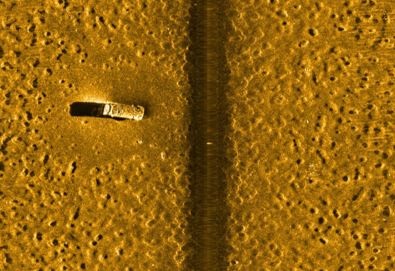 At UMD's Advanced Technology and Manufacturing Center (ATMC) in Fall River, MA, the underwater systems company Oceanserver Technology,Inc. (OTI) made an extraordinary discovery in March 2012.  While Conducting a test in the South Watuppa Pond with an Iver2-AUV equipped with the Klein UUV-3500 side scan sonar, OTI discovered a car which had been flipped over at the bottom of the pond.  After talking to local police to investigate the matter further, a driver was able to determine that the car was a 1986 Mazda 626 which was reported stolen in 1987.

Upon hearing of this discovery, UMD's Coastal Systems Technology research team decided to run one of their Iver2-AUVs over the area as well.  UMD students Christopher Hanna, Kyle Andrade, and Christopher Goonan led the survey and used the Iver2-167 vehicle equipped with the Klein UUV-3500 side scan sonar system to create an acoustical image of the car, shown in the image.  Located about half a mile off the shore of the pond and about 12 feet of water, the car is one of many objects that have been located over 100 surveys conducted by UMass Dartmouth students.  For more informations please visit: