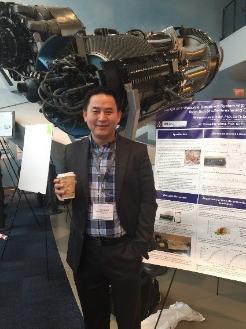 ‌As one of about 50 outstanding young engineers, Dr. Honggang Wang, an associate professor in Electrical and Computer Engineering department, was invited to attend the German-America Frontiers of Engineering Symposium (GAFOE), organized by National Academic Engineering (NAE) and the Alexander von Humboldt Foundation (AVH), and hosted by GE Aviation in Evendale, Ohio, March 31-April 2.

Dr. Wang presented his innovative research work in Internet of Things and wireless health through a short talk and poster. Dr. Wang joined UMass Dartmouth as an assistant professor in 2009. He has made substantial contributions to important technologies in wireless health, Internet of Things (IoT), and multimedia communications. He published more than 120 research papers in top journals and conferences, which were cited more than 2000 times per Google Scholar. He has assumed leadership at several top IEEE conferences, and associate Editor-in-Chief of IEEE internet of Things (IoT).

His research has been funded by NSF, DoT and UMass.  Early this year, Dr Wang was awarded as the UMassD 2016 “Scholar of Year”. and has been a very active contributor to IEEE and IEEE Communications Society over a decade.

Background: Since 1995, the NAE has held an annual Frontiers of Engineering symposium that brings together 100 outstanding engineers (ages 30-45) from US companies, universities, and government labs to discuss leading-edge research and technical work across a range of engineering fields. The Frontiers of Engineering program brings together through 2-1/2 day meetings a select group of emerging engineering leaders from industry, academe, and government labs to discuss pioneering technical work and leading edge research in various engineering fields and industry sectors. The goal of the meetings is to introduce these outstanding engineers (ages 30-45) to each other, and through this interaction facilitate collaboration in engineering, the transfer of new techniques and approaches across fields, and establishment of contacts among the next generation of engineering leaders. The Frontiers website is www.naefrontiers.org.