Buoyed by their nursing degrees, ABSN graduates look forward to caring for others

With former careers as diverse as market research, financial services, as EMTs, and mail carriers, the 18 graduates of the Accelerated Bachelor of Science degree in Nursing (ABSN) program have all reached a common goal: they are on their way to becoming registered nurses.

They were honored in a traditional Pinning Ceremony held last week at Woodland Commons as they received their nursing pins from family members and classmates.

“I speak for all of your faculty as I say congratulations for a job well done! We were happy to walk this journey with you and we are excited for all you have to offer the profession of nursing,” said Clinical Assistant Professor Kiley Medeiros.

The ABSN graduates have completed an accelerated 17-month nursing program for a second bachelor’s degree after earning a bachelor’s degree in another field. Online classes were complemented by face-to-face lab and clinical experiences in Massachusetts at Alden Court, a long-term care facility in Fairhaven; Beth Israel Deaconess Hospital in Plymouth; St. Anne’s Hospital in Fall River; and SouthCoast Behavioral Health in Dartmouth and in Rhode Island at Hasbro Children’s Hospital in Providence and Bradley Hospital in East Providence. Upon completing their board exams, these graduates will become registered nurses.

“For the nursing profession, these are challenging and exciting times. Nurses have and will continue to make essential contributions to the health and well-being of all members of our society,” said College of Nursing & Health Sciences Dean Kimberly Christopher.

“Graduates, I urge you to embrace these opportunities to contribute. Give them your very best effort. Approach each opportunity with an open mind, open heart, a sense of humility, and a sense of humor,” she added.

Dr. Uloma Onubogu, assistant dean for online learning, spoke to the students remotely about their journey to achieve their accelerated nursing degree in the midst of a health pandemic. “We bear witness today as your career dreams and passion come together into something beautiful and worthy. Feel good about your achievement because you fought hard for it and you have earned it. Make your experience purposeful and fulfilling and be ready to reinvent and rediscover yourself as you help to shape the future of nursing."

Student speaker Lindsay Lunn, who holds an undergraduate degree in psychology from Merrimack College and a master’s degree in psychology and child development from SNHU, told her fellow graduates. “. . . being almost 30 and changing careers, I was very self-conscious and nervous about getting into the field of nursing and starting a nursing program that I anticipated would be very competitive. Meeting my classmates instantly eased my fears. Instead of competition, I was met with support, kindness, and camaraderie.”

“Make your experience purposeful and fulfilling and be ready to reinvent and rediscover yourself as you help to shape the future of nursing." 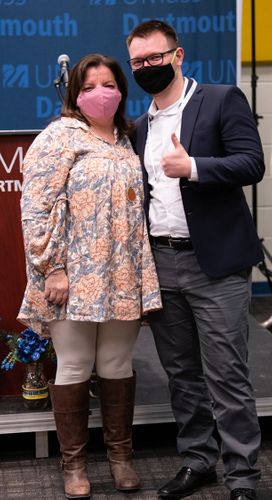 Andrew Guest celebrates after receiving his nursing pin from his mother, Karen, at the ABSN Pinning Ceremony. A former mail carrier, Guest will now study for his licensing exam to become a registered nurse.

Meaghan Kay ’19 earned a bachelor’s degree in psychology from UMass Dartmouth and worked at Citizens Bank. “I always knew I wanted to work in health care, but I wasn’t sure in what capacity or where to start. My grandfather was really sick the last two years of his life and I watched my mom (who is a nurse) take care of him. This really inspired me to pursue nursing and I wanted to make the same difference my mom does on a daily basis.”

Kay loved her undergraduate experience at UMassD and it was an easy choice for her nursing degree. She would love to join her mom working in the ICU at Rhode Island Hospital.

Diane Powers ’90 experienced serious medical complications when she gave birth to her fourth child and was placed in intensive care for two weeks. “The nurses who cared for me were so compassionate, caring, and attentive.  They were able to identify complications that I was having early, and I truly believe they saved my life.  This made me want to become a nurse. I wanted to be able to give to others what they had given to me.”

As a UMassD alumna, Powers was well aware of the reputation of the university’s nursing program. “The hybrid model of the ABSN program was perfect for me as I am a single mom and could arrange my studies in a way that was conducive to my lifestyle.  It also allowed me to participate in hands-on labs, simulations, and clinical rotations just as in the traditional program.  UMassD also has a 95% NCLEX pass rate, which also played heavily into my decision to enroll in this program,” Powers said. She plans to become a labor and delivery nurse.

“I decided to go back to school and become a nurse when I began working at the Lifespan Cancer Institute, where I realized how passionate I was about helping people achieve a healthier life for themselves,” said Celine Burns, a senior research assistant who works with patients participating in clinical trials. “I chose UMass Dartmouth because I know firsthand that the nursing program has a good reputation, as my mother got her master's degree in nursing from here.” She plans to gain acute care and bedside nursing experience and may return to research.

Andrew Guest, a former letter carrier for the U.S. Postal Service, said he considered careers in physical or occupational therapy or nursing. He realized that nursing offered the most flexibility along with the opportunity to help others.

“I'm enthralled with the idea that I will get to continually learn new things, and when that feeling of the same-old-same-old happens, I'll be able to make a change to something different within the field of nursing,” he said.

Guest said he chose UMass Dartmouth for its location and the fact that the 17-month program was the right pace for him.

After working as an EMT for a few years, several of James Darigan’s partners suggested he pursue nursing, as they felt his skills would thrive. He also helped to care for a family member as she recovered from a brain aneurysm. “The gratitude and joy I saw in her when I could help her with something helped instill in me a passion for helping people in any way I could. This was a large reason why I pursued a career in EMS and then nursing,” said Darigan, who holds a degree in humanities from Providence College.

The Pinning Ceremony is an historic tradition

An historic tradition with roots that date back to the Crusades, the Pinning Ceremony officially marks a student’s transition from nursing student to professional nurse. The first pinning ceremony was held at the College of Nursing & Health Sciences in 1974, and the tradition continues nearly 50 years later.

As explained by Dean Kimberly Christopher, the nursing pin also symbolizes service with its rights and responsibilities, students’ academic accomplishments, and a bond among UMass Dartmouth nursing classmates.

“Make your experience purposeful and fulfilling and be ready to reinvent and rediscover yourself as you help to shape the future of nursing."