Hailey Roy’s path to optometry school began with her viola. A member of the New Bedford Youth Symphony Orchestra, her Saturday morning rehearsals were held at UMass Dartmouth.

One morning, her mother, Lisa, was looking for something to do while she waited for Hailey during rehearsal and joined the Medical Laboratory Science (MLS) program tour in the Dion building. She had earned her post-master’s certificate in applied behavior analysis at UMassD in 2011.

“She grabbed all the information sheets and showed them to me,” said Roy, a native of Acushnet, MA. “We went on a tour together the very next week and I fell in love!”

Roy, whose father, John ’87, a middle school technology and engineering teacher, and brother, Connor ‘20, also graduated from UMass Dartmouth, enrolled as an MLS major in the fall of 2015.

“In choosing a program, I wanted a bachelor’s that would allow me to have a solid understanding of the sciences as they applied to the human body. MLS allowed me to do that,” Roy said. “I also loved that MLS was very hands-on. The program has a great professor to student ratio so that was a big draw. I wanted to be able to connect with my teachers in a way that a large class size doesn’t offer.”

Currently a second-year post-baccalaureate Pre-Med student who will earn her certificate this year, Roy is realizing her dream of attending medical school. She was accepted to the two optometry schools she applied to and will enroll at the New England College of Optometry this fall. Following the four-year program, she will graduate with a Doctor of Optometry degree.

“It’s true, I chose a different path than my classmates,” she said. “I’m hoping to specialize in special populations/pediatrics, specifically to work with children with autism. They are truly an underserved group in terms of eye care because it can be difficult for children to convey their needs."

“My BS in MLS is going to be so helpful for numerous reasons,” Roy added. “The clinical experience I gained in my internship and labs will be invaluable. MLS teaches you how to be meticulous in our work and an adaptive
problem-solver. It offered me a rigorous set of studies, well versed in science, that prepared me for options in multiple fields. Overall, it helped me to be the type of student that can handle the demands of optometry school.”

"Medical Laboratory Science focuses on understanding human health and disease and how to monitor these processes," said Department Chair and Professor Frank Scarano. "Our students are prepared to start their careers in a variety of settings performing and interpreting laboratory testing immediately after graduation. In addition, the MLS program prepares students, like Hailey, for a wide range of advanced degrees in medicine and health-related fields."

“I chose optometry because it will allow me to further my education, specifically in medicine. It also offers the work/life balance that I wanted, but with a career as a doctor. I love the human contact that I couldn’t get from working in a lab,” Roy said.

"MLS teaches you how to be meticulous in our work and an adaptive problem solver. It offered me a rigorous set of studies, well versed in science, that prepared me for options in multiple fields.” 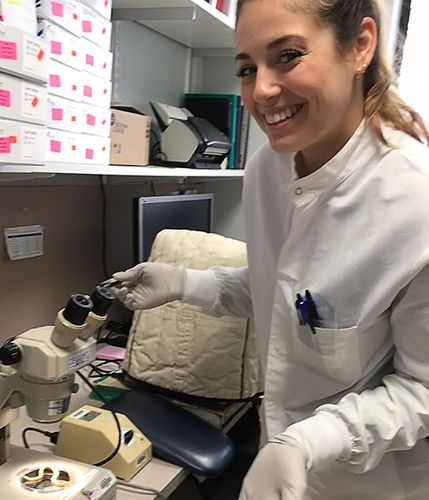 As a commuter, Roy made the effort to get involved at UMassD

“I had a great experience at UMassD,” she added. “A large part of that was the amazing MLS faculty. My class became like a family and it was a unique experience that bonded us. Being a commuter presents you with its own set of challenges in meeting people. UMassD understands that and offers so many clubs, events, and opportunities to meet other students.”

Knowing medical school was on the horizon, Roy chose to commute to UMass Dartmouth to save money. As a result, she immersed herself in school activities. She joined the Phi Sigma Sigma sorority and served as a student mentor, Sisterhood, and Philanthropy Chair. For her involvement, she received the Certificate of Appreciation–Mentorship. She was team captain in UMass Dartmouth’s Relay for Life to raise funds for the American Cancer Society.

She joined the MLS Club and served as class representative during her freshman year. She also volunteered at Gifts to Give and UMassD’s STEM for Girls. She is the MLS program’s tutor and helps students with chemistry, pre-calculus, and calculus classes as well as classes in the major.

While in college, Roy received a 200-hour yoga teacher certification and teaches classes online. She is currently enrolled in another program to earn her 500-hour certification.

After commuting as an undergraduate, Roy is excited to move to Boston and experience big city living. As for her trusty viola, Roy is definitely bringing it to optometry school along with her cello, which she taught herself to play.

“Playing string instruments, to me, is a way of feeling every aspect of music,” Roy said. “Sometimes, the world can melt away. It’s helpful to use music to escape from the stresses of school and work, even for just a little while.

“When I was in the symphony and within an orchestra, it’s like a puzzle with layers of melodies all coming together as one complete thought. There’s something really beautiful about that, how the pieces can become one truth.”

Based on her many experiences and achievements at UMass Dartmouth, Roy has composed her own melody for a successful future.

"MLS teaches you how to be meticulous in our work and an adaptive problem solver. It offered me a rigorous set of studies, well versed in science, that prepared me for options in multiple fields.”

Medical laboratory scientists strive to answer medical questions and solve medical mysteries. When you major in medical laboratory science, you'll learn to analyze blood, body fluids, cells, tissues, and other specimens to determine both the causes of diseases and their appropriate treatments.