Four Art Projects Connected by a Theme of Wind 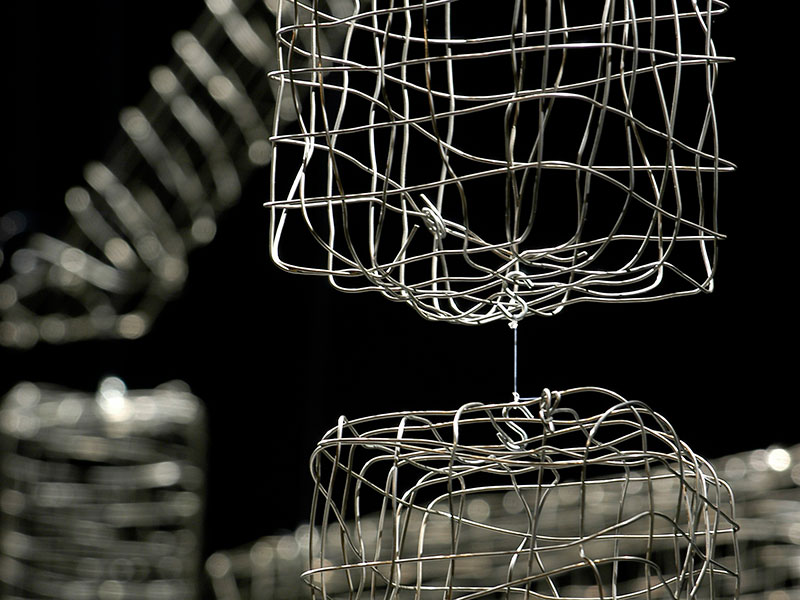 Elizabeth Keithline, (The Air) As It Moves, detail

Elizabeth Keithline: (The Air) As It Moves

Site-specific installation by Elizabeth Keithline responding to the air flow of the gallery. Curated by Viera Levitt.

The UMass Dartmouth University Art Gallery presents four projects connected to the theme of wind throughout the Star Store Campus in Downtown New Bedford. Inspired by the inaugural Design Art Technology Massachusetts (DATMA) festival, titled Summer Winds 2019, visitors can experience various installations and video projects from different artists: Rhode Island's Elizabeth Keithline presents a site specific installation (The Air) As it Moves at the University Art Gallery; Spencer Finch, a well-known New York City artist exhibits  in Gallery 244; videos by Renee Piechocki and Brandon Forrest Frederick play at the Bubbler Gallery. Lastly, a project Whispers by Canadian based Light Society will be projected on the Lecture Hall wall only during AHA! Nights, and is not to miss.

(The Air) As It Moves is a site-specific installation by Elizabeth Keithline that uses hanging wire objects to create a play of light and shadows as it moves in the air. These abstract shapes have a “memory” of suspended skeletal, swaying wire beams and rafters that invite viewers to contemplate the invisible forces at work in our lives. We see these forces only because of their ancillary activity, never directly. Viewers are invited to move through the gallery and, by doing so, gently activate the installation.

Throughout the summer, the walls will become populated by additional shadow drawings, which will make it hard to distinguish the real shadows from their drawings, creating a disorienting and off balance feeling. On July 11 & August 8, there will be a family-friendly interactive shadow drawing from 6 to 8 pm.

Artist Elizabeth Keithline’s work focuses on human self-extension and its effects on contemporary society. Born in Connecticut in 1961, Keithline has been a weaver since she was 14 years old. In 1996, after moving to Rhode Island, she invented a sculpture technique wherein wire is woven around an object and then burned out, leaving behind a wire “memory”. As the installations grew, she began to cut away and re-mend parts of the wire, rather than burning it out. The “spines” that the repairs incorporated became part of the work's content area. She has installed public art projects in Boston, Paxton, and Oxford, MA. A current project, "The Shadow Tree" is installed in the Art & Nature Center at the Peabody Essex Museum through March 2021.

Keithline’s work has been reviewed in the New York Times, Sculpture Magazine, the Boston Globe, the Hartford Courant and others. She is also the consulting director for the Rhode Island State Council On the Arts Percent For Art Program and the State’s Cultural Facilities Grant and serves on the advisory committee of Public Art Review. 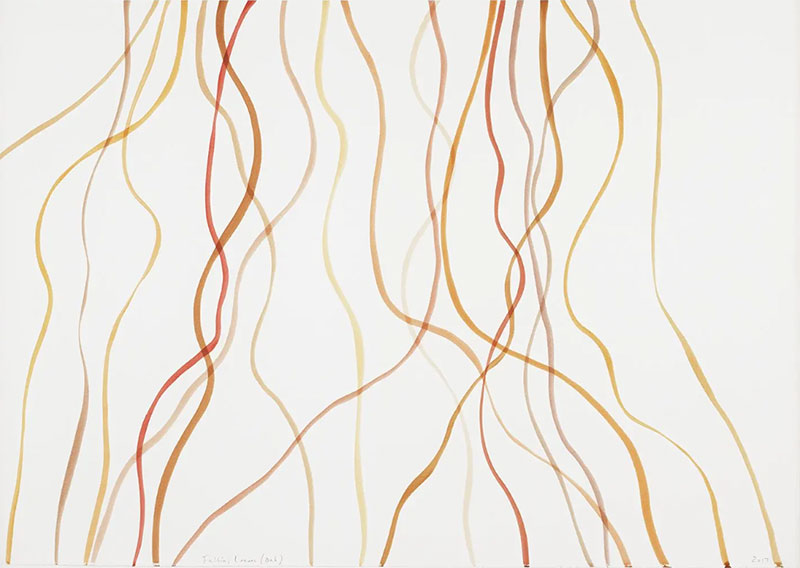 This exhibition introduces the work by well-known New York City based artist Spencer Finch to New Bedford audiences. His piece Wind (through Emily Dickinson’s window, August 14, 2012, 3:22pm) is a re-creation of a summer breeze blowing through the window in the poet Emily Dickinson's bedroom in Amherst that the artist measured with an anemometer on site.

Spencer Finch’s watercolor drawings are based on videos of falling leaves whose paths he had traced. After the artist made the video recording, he collected leaves from under the tree and matched those colors with the watercolor. He says, “What I especially like about it is that the twists of the watercolor line as it gets thicker and thinner refer to the rotation and movement of the leaf as it descends from the tree.”

Spencer Finch is known to explore these kind of elusive and sensory experiences through his work— from the color of a sunset outside of his motel room to the light in a Turner painting, using both a scientific approach to gathering data and a true poetic sensibility.

Spencer Finch (born 1962, New Haven, Connecticut) has exhibited extensively, both in the US and internationally. He has a BA in comparative literature from Hamilton College and an MFA in sculpture from the Rhode Island School of Design. Recent major projects include Fifteen Stones (Ryōan-ji), an intervention in the International Pavilion at the Fundació Mies van der Rohe, Barcelona, Spain (2018); A Cloud Index, a site-specific commission for the new Elizabeth line station at Paddington in London (2018); Lost Man Creek, his project with the Public Art Fund, Brooklyn, NY (2016-2018); Trying To Remember the Color of the Sky on That September Morning, a special commission for the 9/11 Memorial, New York, NY (2014); and A Certain Slant of Light, The Morgan Library & Museum, New York, NY (2014).

Inspired by witnessing the futility of using a leaf blower on a windy day, this video references the human desire to structure uncontrollable forces.

Brandon Forrest Frederick is an interdisciplinary artist, educator, and organizer based in Kansas City, Missouri. His work explores many relational aspects to living in a capitalistic and consumption based society. In using images, videos, sculptures, and found objects he looks to reveal poetic and poignant moments within the everyday and provide a new sense of agency in the act of disruption. To that effect he uses humor, performative gestures, models of reproduction, image making, community collaboration, and moments of civic imagination, organization, and reinterpretation. Each of these points of interaction facilitate a multi-faceted approach to dealing with the inequities of our current situation while learning to cope within the peculiar humor of it all.

My work begins with wandering. Simple walks, long excursions, and relocations provide clues about projects I want to make. Along the way, I seek out situations, objects, and places. Things that are beautiful, odd, frightening, humorous, or incomplete attract me. I push myself to explore what is unfamiliar.

In my studio practice, I work with content gathered through exploration. There is no script. I sift through existing images and capture new ones as conceptual threads, themes, allowing narratives to emerge. I use simple editing methods to emphasize, distill, or bridge them conceptually. My presentation style is direct. I aim to create content that is recognizable. Current topics in my work include intuition, trust, isolation, and travel.

This video developed during an artist residency on the Olympic Peninsula in Washington State. Alone in a cabin in the woods for two weeks, I spent time listening and watching, recording sounds and images in the forest. The video captures changes in the wind, light, and my comfort level.

In addition to her studio practice, Renee Piechocki is engaged with collaborative projects as an artist and public art consultant. She is based in Pittsburgh, Pennsylvania and graduated from Hunter College with a degree in Studio Art. 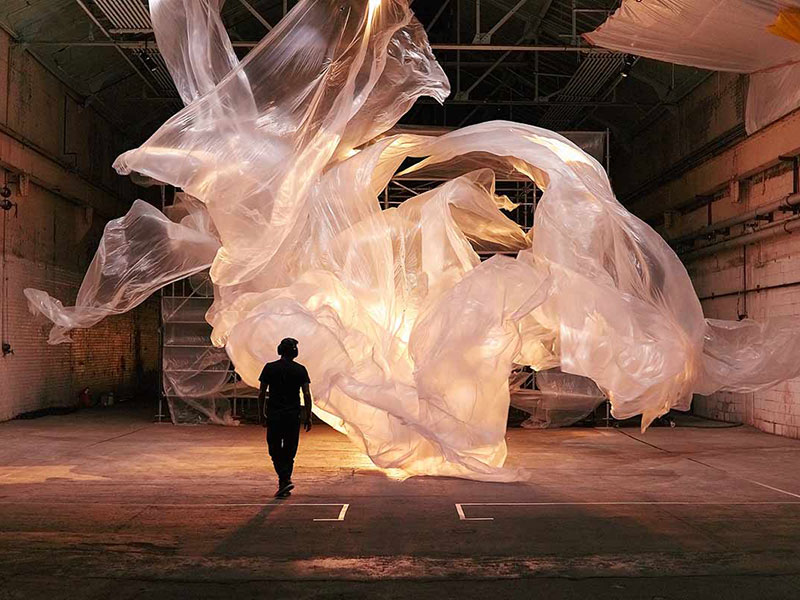 Whispers is a video-documentation of 2018 mixed-media installation of Canadian-based Light Society that explores the potential of spiritual practices and esoteric modalities as re-imagined through the use of contemporary technologies. The installation presented through this video documentation is conceived as both supernatural experience and mind and body training session exploring the boundaries of elemental sensation. The piece exists in two states: wind therapy session and an ambient rest period. Developing a hypnotic build and an overwhelming amplitude of strength, Whispers exists in the space between fear and enchantment, invoking the power of the invisible.

Light Society is a collaboration between artists Aliya Orr and Sakchin Bessette exploring the intersections of art, science, and mysticism. Conceived as a series of extended experiments across a diverse range of media including sculpture, photography, installation, video, and performance, their work seeks to generate meaningful engagements with altered states of consciousness, perception, and the magic of the everyday. Orr’s and Bessette’s public projects and gallery works have been shown across North America, Europe, and Asia. Their installation Whispers premiered in June 2018 at the International Digital Art Biennial, Montreal.

These exhibitions are a part of the inaugural festival run by the DATMA (Design Art Technology Massachusetts), titled Summer Winds 2019. Multiple partners in New Bedford contribute programs, exhibitions, and educational events to this initiative throughout the summer.