By College of Visual & Performing Arts
Posted Tuesday, May 5, 2020
Updated: Friday, March 19, 2021
Share on Facebook TweetTWEET Share on LinkedInShare on LinkedIn Print this pagePRINT THIS PAGE Email this pageEMAIL THIS PAGERSS

The Midnight Garden is a 2D role playing game where the protagonist, Daisy, wakes up one night in a magical garden.  A strange voice beckons Daisy to explore the depths of the garden and she discovers a frightening world of monsters with an appetite for children.  To survive the night, Daisy must rely on her self-appointed guardians, Mr. Violet and Ms. Rose, to keep her alive.  In the demo, the player controls Daisy and they explore the starting area called The Nursery.  The focus of The Midnight Garden is story.  I worked to create compelling characters whose personalities come to light from their words. 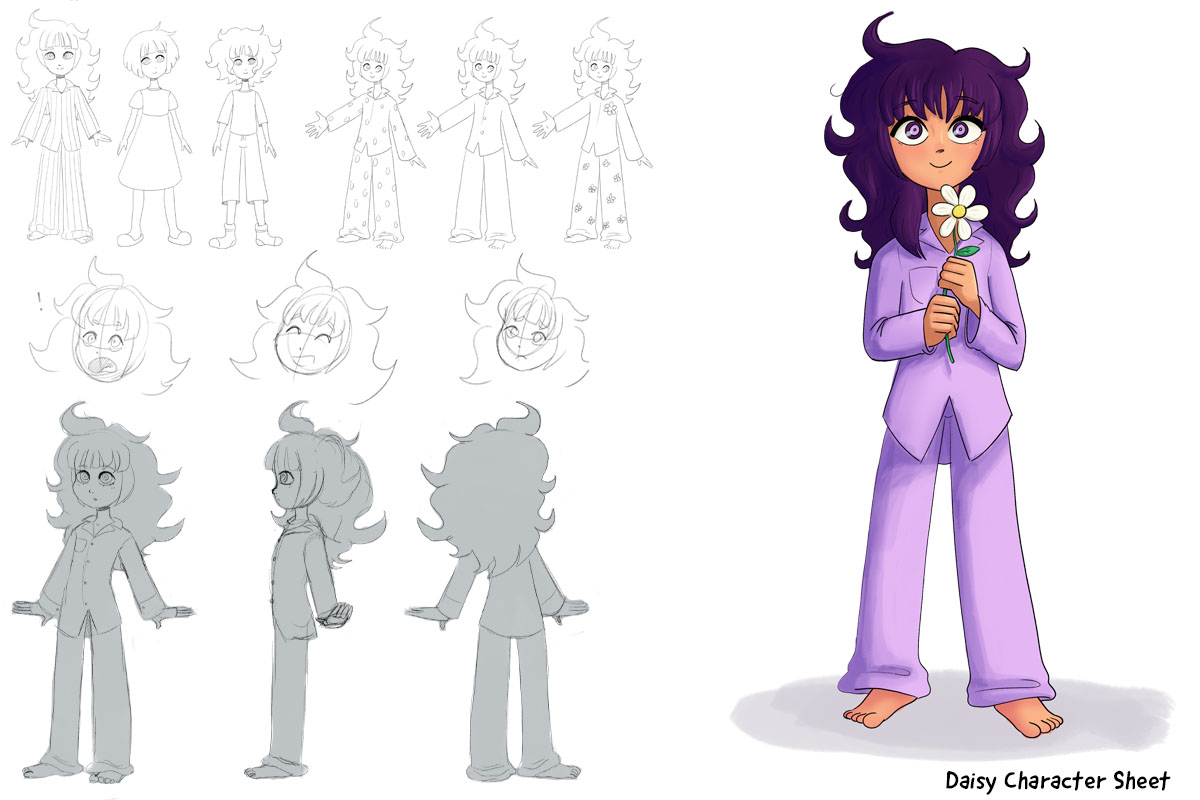 Daisy is the protagonist of my demo. I explored different ideas for a sleepy child in pajamas, and decided on a more classical style of pajamas and comically exaggerated bed-head. 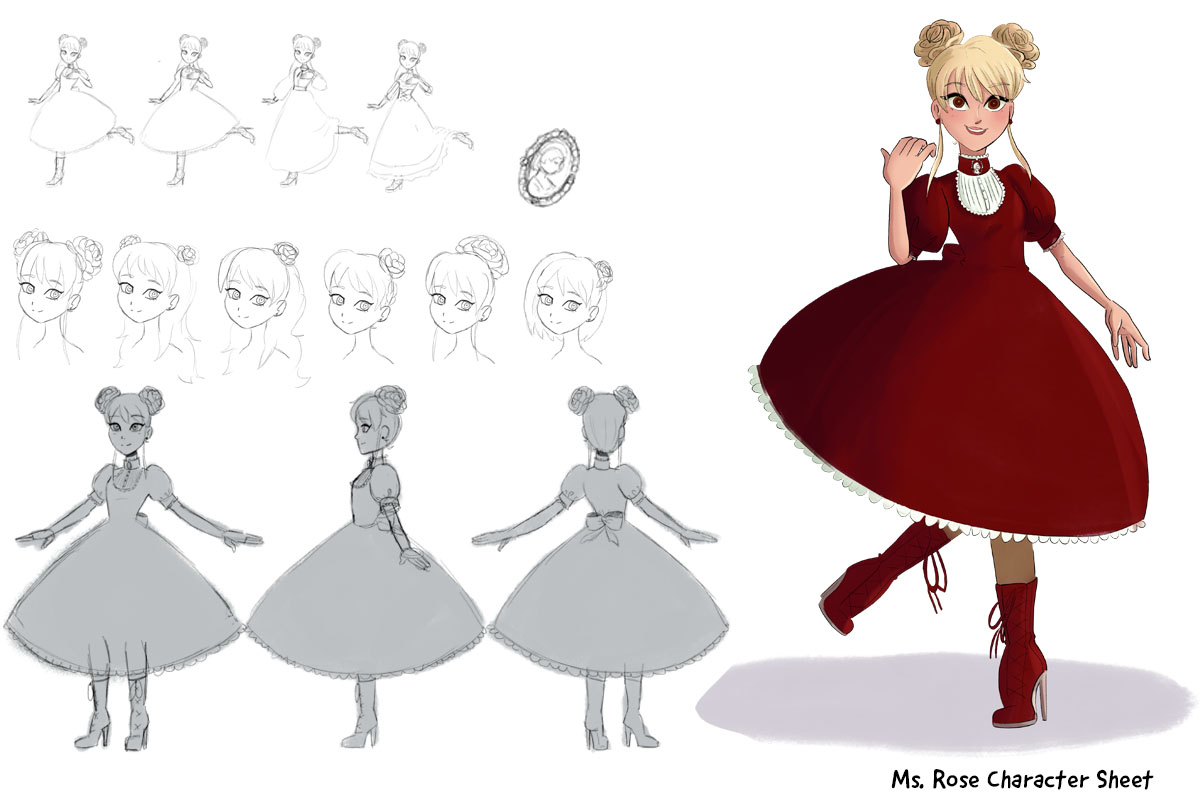 Ms. Rose is one of Daisy’s guardians. I studied different silhouettes of dresses with a Victorian styling as well as different ways to incorporate roses into her hair. 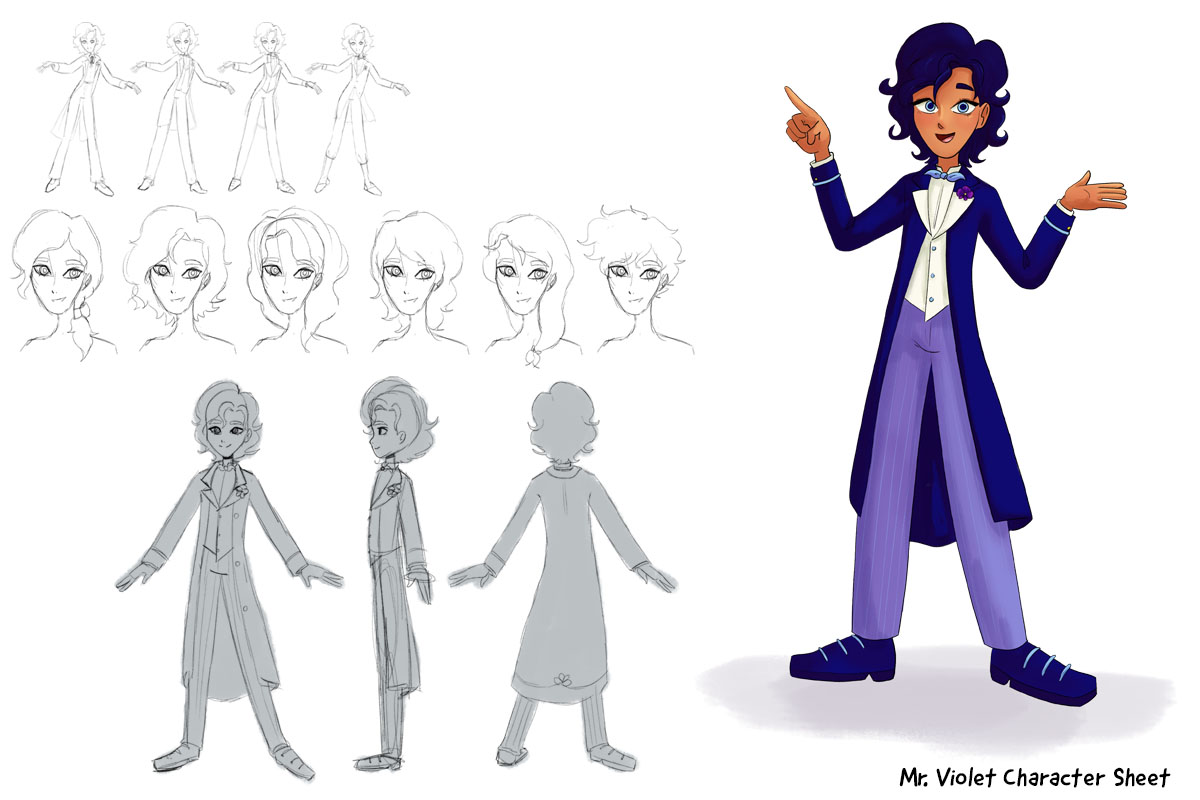 Mr. Violet is Daisy’s other guardian in my demo. I wanted him to show his contrasting personality with Ms. Rose, so I chose to give him looser hair and a sleeker silhouette. A fun detail is the small violet on his lapel. 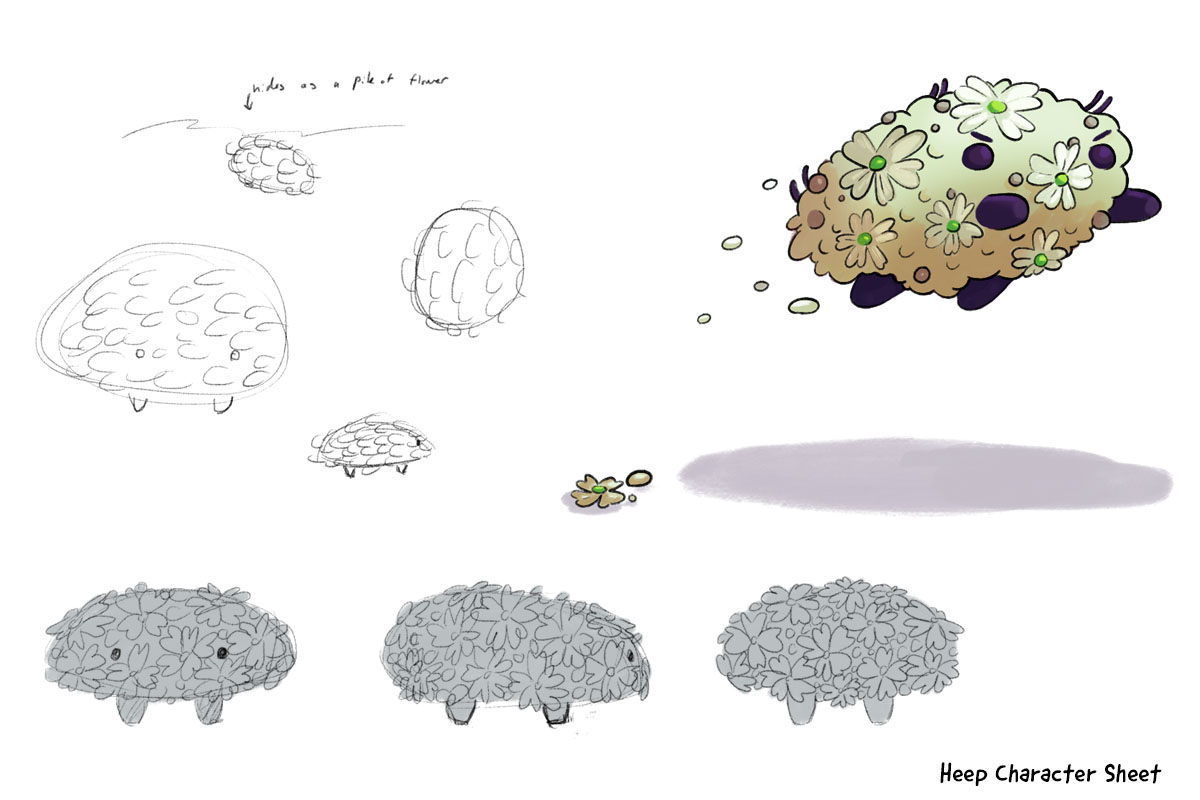 The Heep is designed to be the first enemy you encounter once you leave the safety of The Nursery. It is inspired by the hemlock plant and its deceptive appearance. The Heep camouflages itself as a patch of white flowers, but if stepped on by accident, they will pounce. 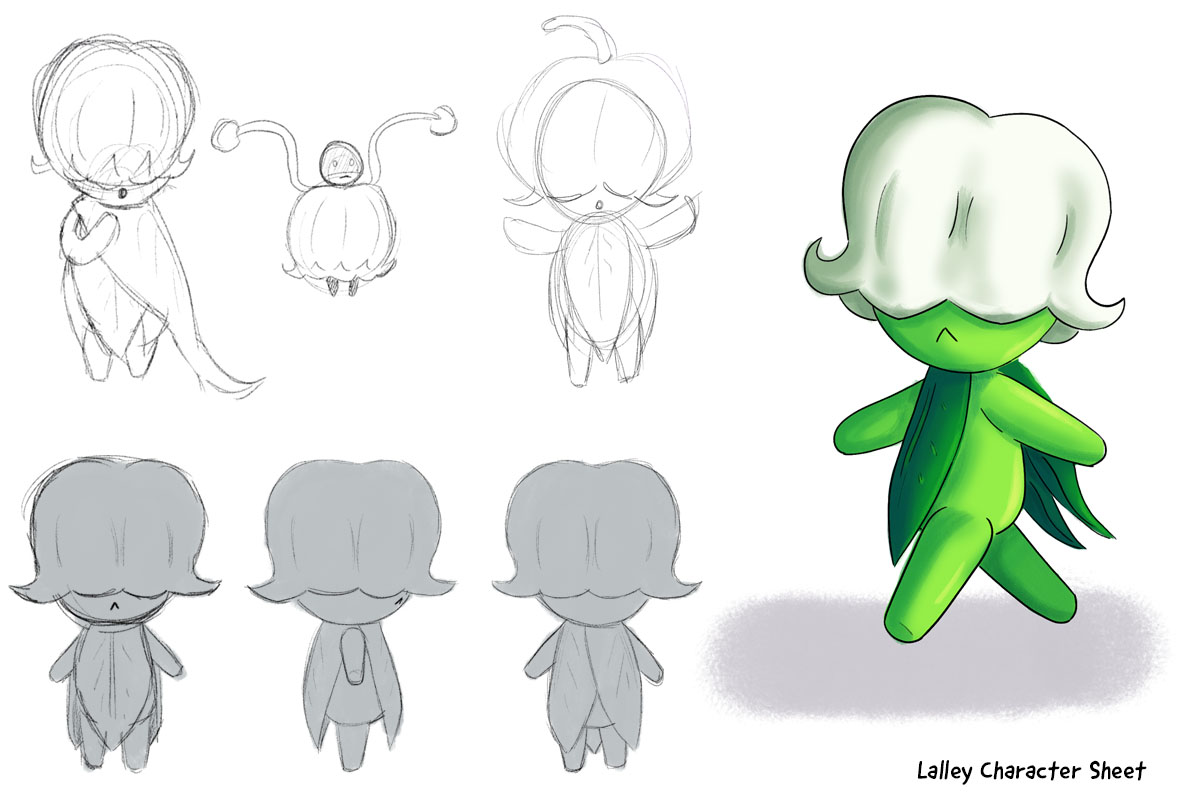 The Lalley is the second enemy the player would face after leaving The Nursery. It is inspired by the plant the lily of the valley. 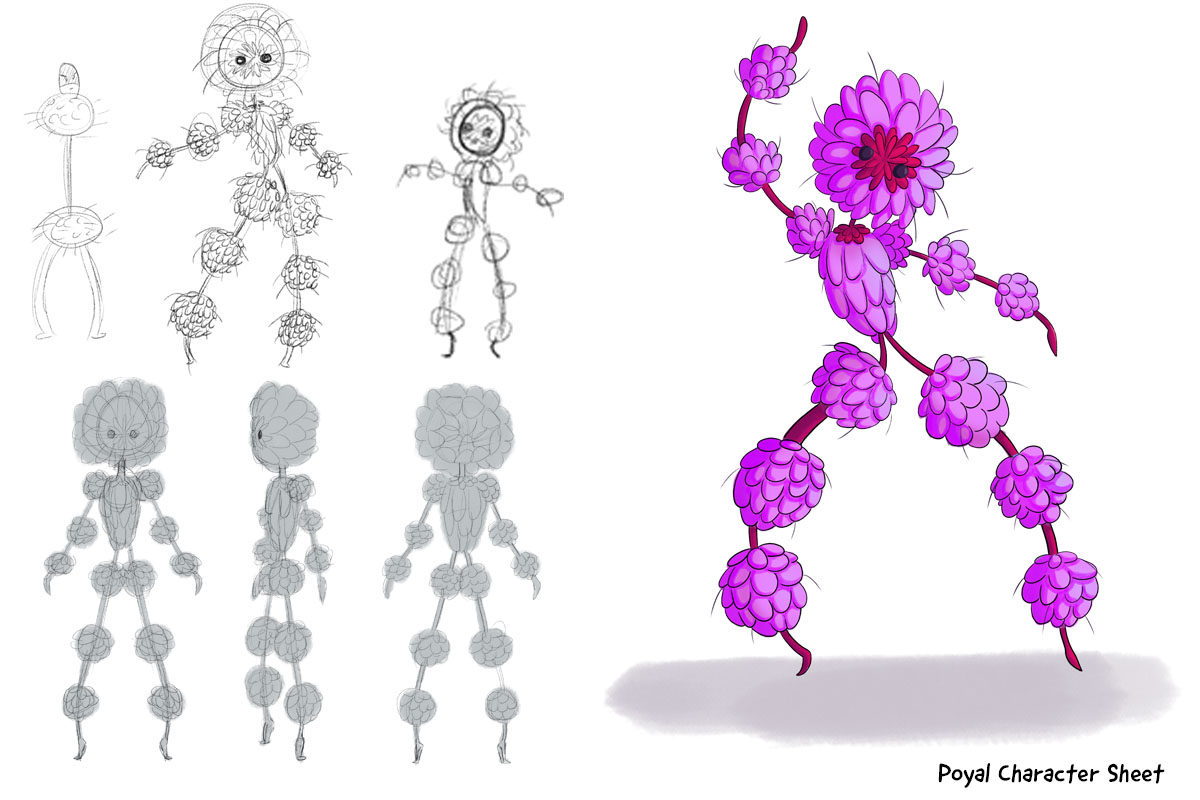 The Poyal is the third enemy that would be encountered after leaving The Nursery. Its lanky body with small, flowery puffs was inspired by the pennyroyal plant. 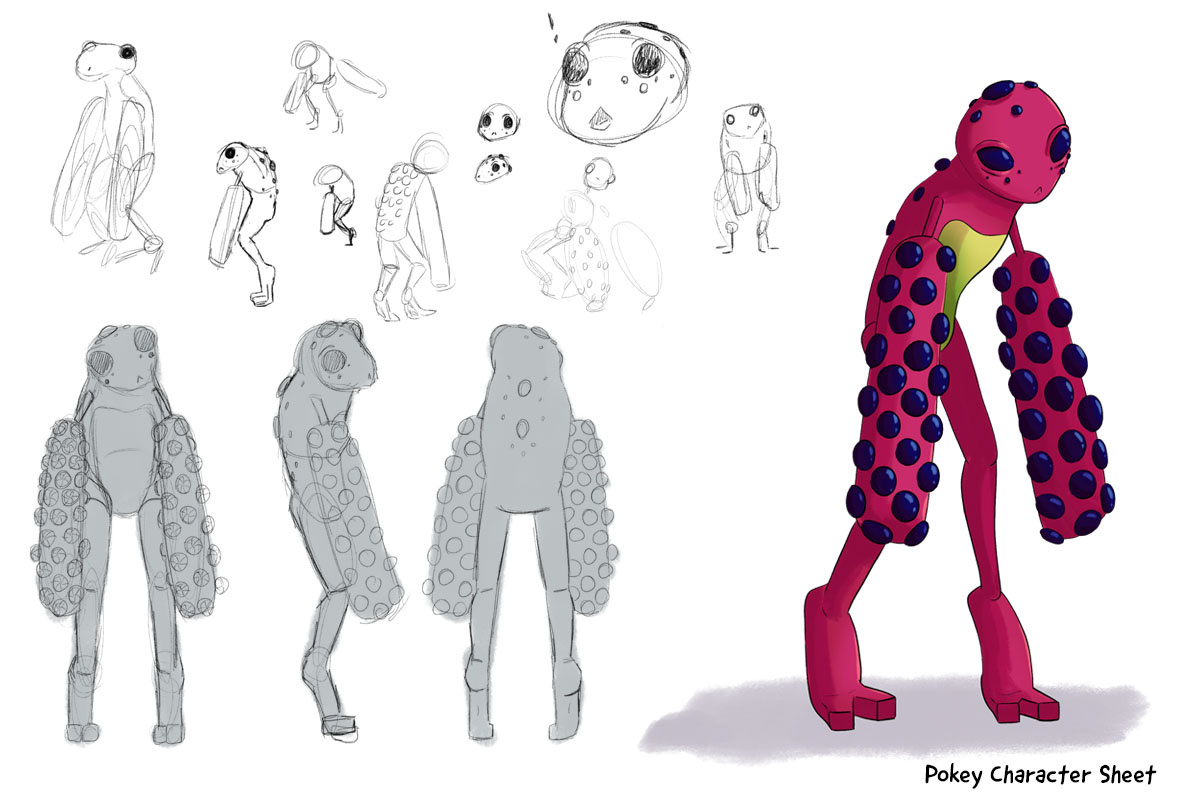 The Pokey is the fourth enemy the player would encounter after leaving The Nursery. I looked to the pokeweed plant and tropical frogs for inspiration for this creature.
PreviousNext
Departments College of Visual Performing Arts, Date: Year 2020, Degree Type BFA, Gallery Campus Gallery, Gallery Exhibitions
Animation & Game Arts BFA