To study Chinese painting and calligraphy at the China Academy of Art in Hangzhou.

Robert Najlis, MFA ’19, has been awarded a Fulbright scholarship to study in China. 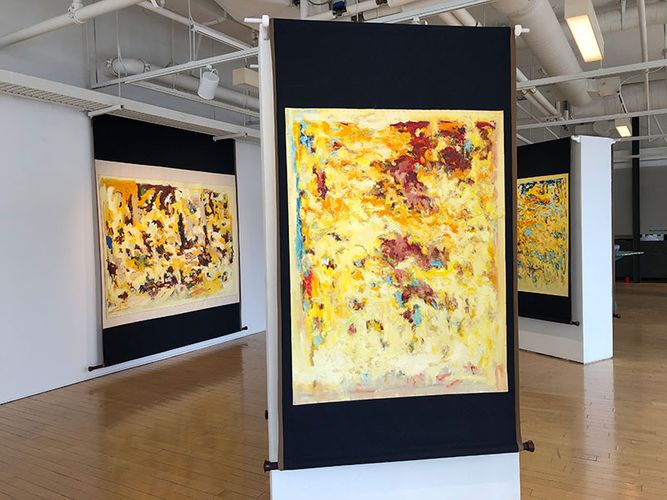 In addition to studying Chinese art, Robert will share his knowledge of Western painting—acquired from studies at UMassD and at the Art Students League of New York—by collaborating with other artists and giving public talks and exhibitions.

"Prior to studying at UMass Dartmouth, I studied abstract painting in the lineage of Hans Hofmann and the New York School at the Art Students League of New York," he said. "I also have a master's degree in computer science and artificial intelligence from Indiana University Bloomington. I have studied music as well, which has contributed to my artwork."

Robert undertook an interdisciplinary model of learning in UMassD’s College of Visual & Performing Arts. While in the MFA in Painting program, he also studied music and coded computer software that allowed music and sound to accompany his paintings.

"I decided to pursue my MFA at UMass Dartmouth/CVPA due to the faculty that I have had the opportunity to work with. When I look back at my time here I will remember how they have helped me to grow as an artist."

Robert works primarily in abstract oil paintings, at times augmented by sound art. He investigates the human relationship to the resonant nature of reality and is particularly interested in questions of immanence and transcendence, and in the philosophical consequences of those questions.

His work makes use of both Western and Chinese artistic processes and philosophies, derived from a shifting set of axioms with which to view the world. This allows for altering paradigms in how one thinks and perceives. His recent work brings together research in sound art and artificial intelligence, and combines oil paintings with audio synthesis and algorithmic composition mediated through sensors to create an interactive environment. The physical presence of his painting plays an important role in creating a resonant space shared between viewer and work.