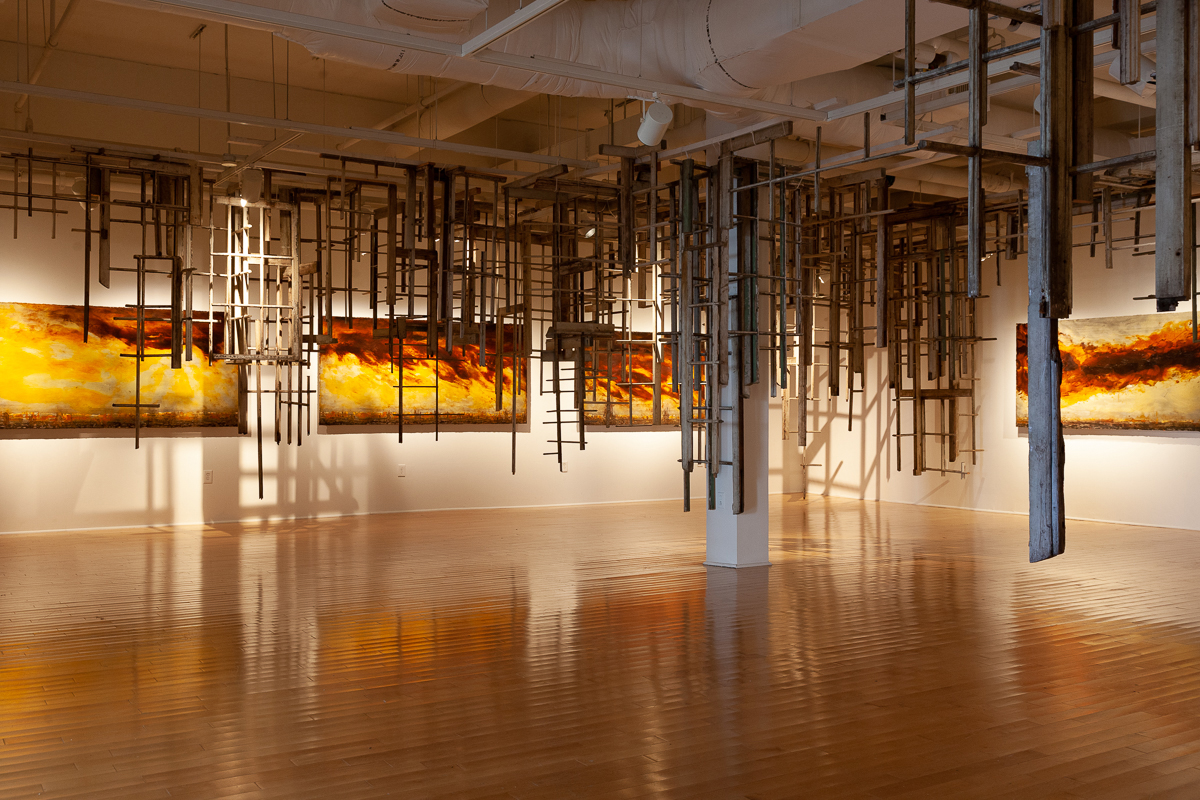 The College of Visual and Performing Arts at UMass Dartmouth is proud to present a new site-specific installation by New York artist Dave Cole in its University Art Gallery in Downtown New Bedford. His work, created with new and repurposed construction materials is timely and surprising with dark undertones while redefining viewers’ relationship with the gallery space.

David Cole’s ‘paintings’ are created not by brush, but through the use of fire, beeswax and shoe polish. They are applied directly on large scale cement boards partly obscured by windows, taken from an old Pawtucket mill a decade ago when the artist lived in Providence, RI. Through the work, one can feel the darkness of our current political landscape, the looming dread of an invisible virus, the burning forests of our Western United States and orange sunsets throughout the East Coast. Cole’s work brings us a metaphoric landscape from this moment in time, one with an as yet, undetermined future. 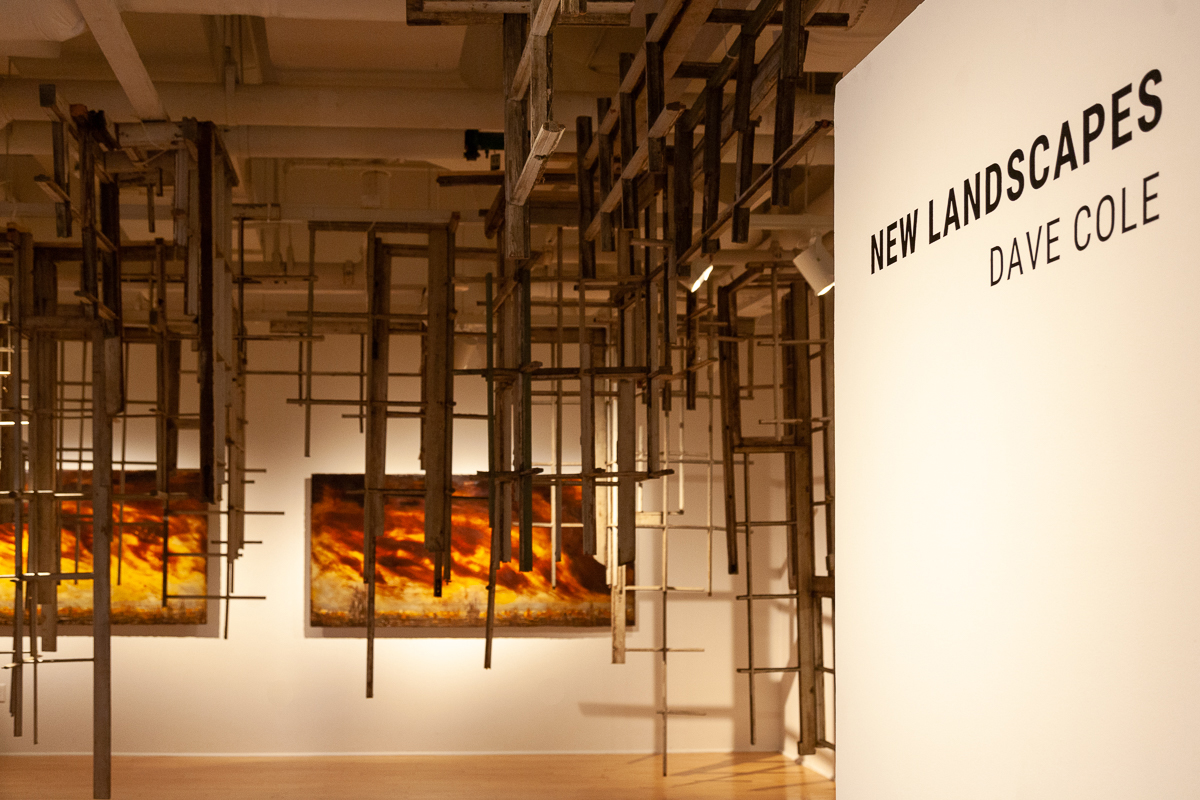 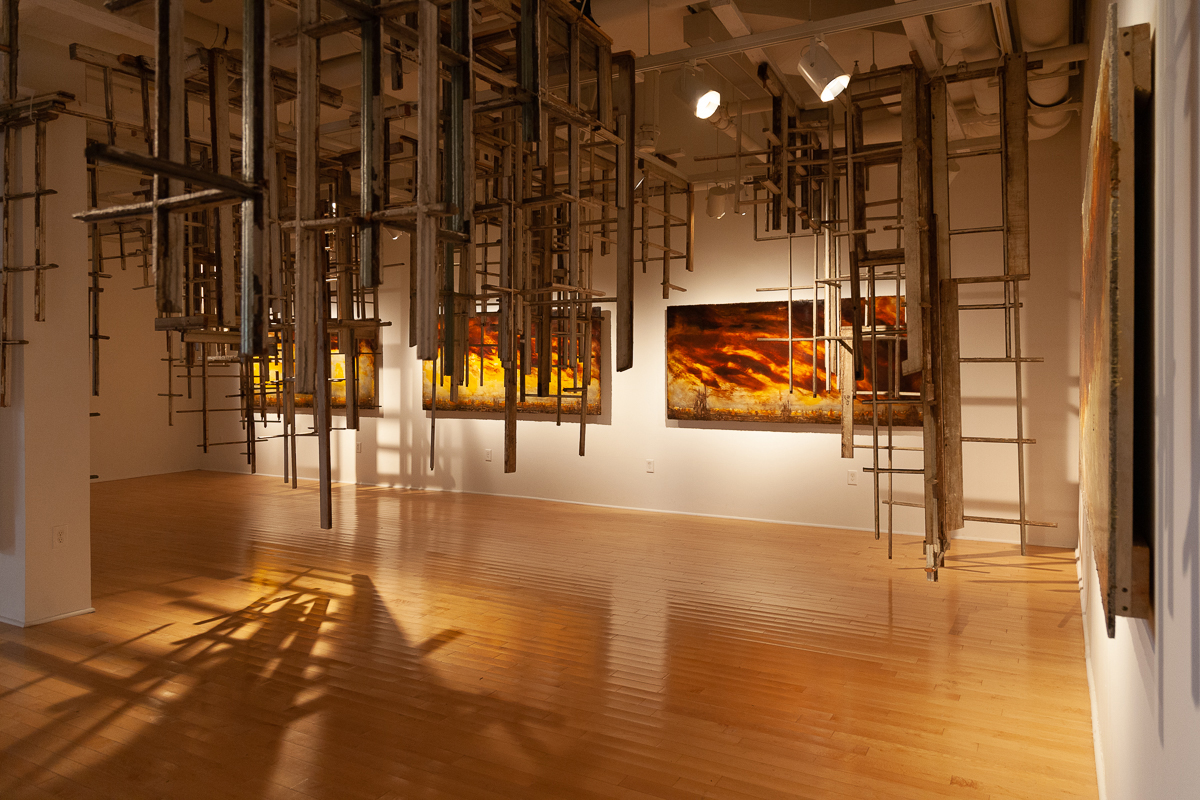 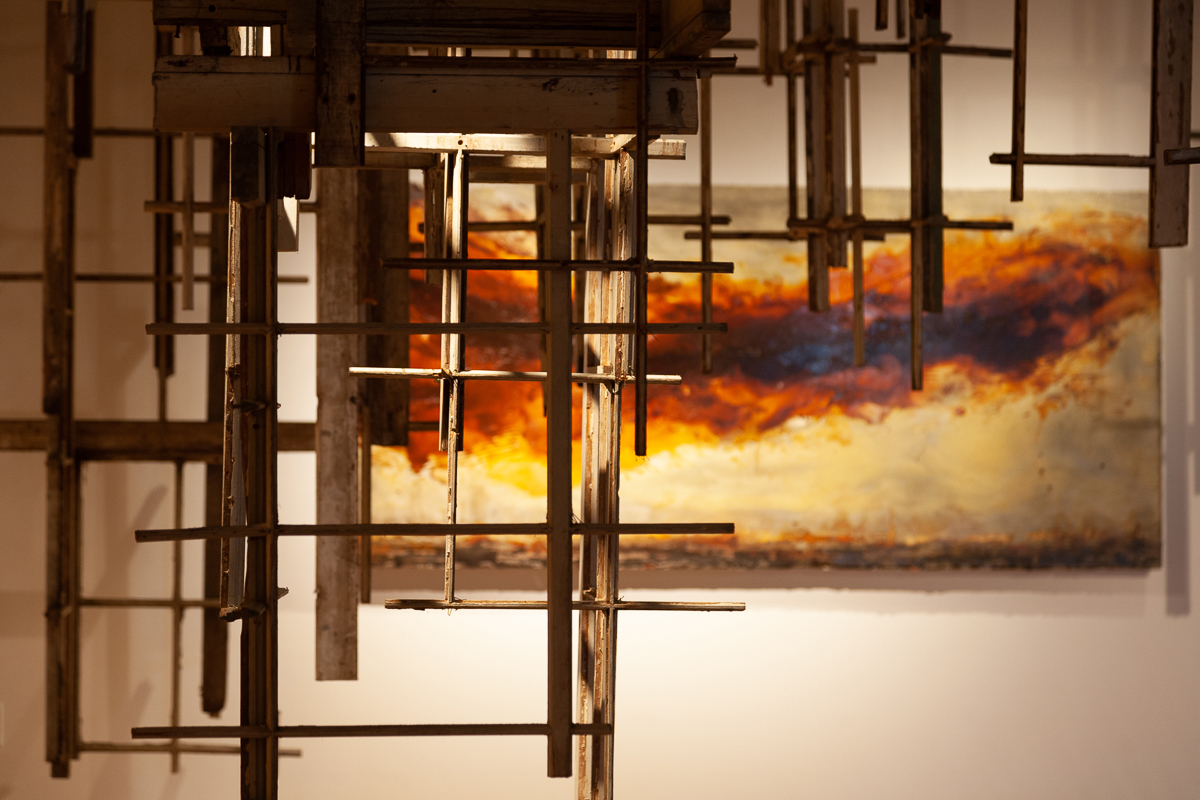 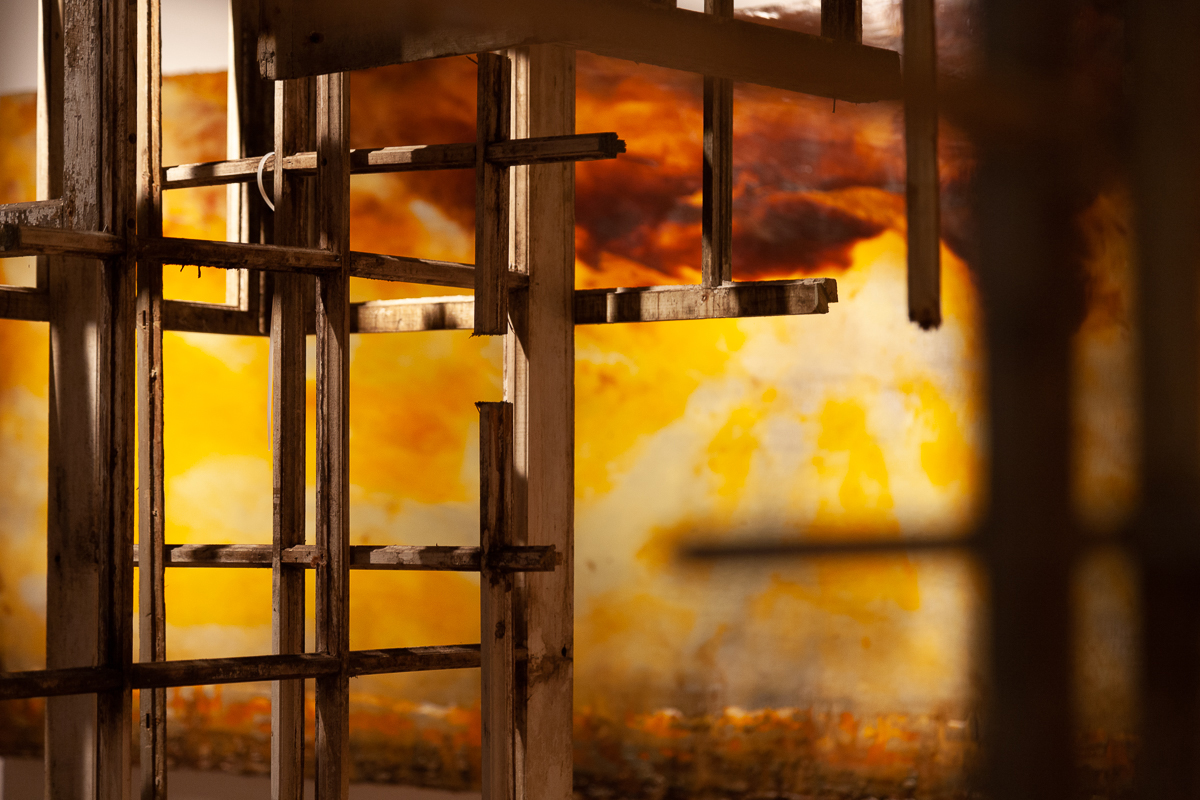 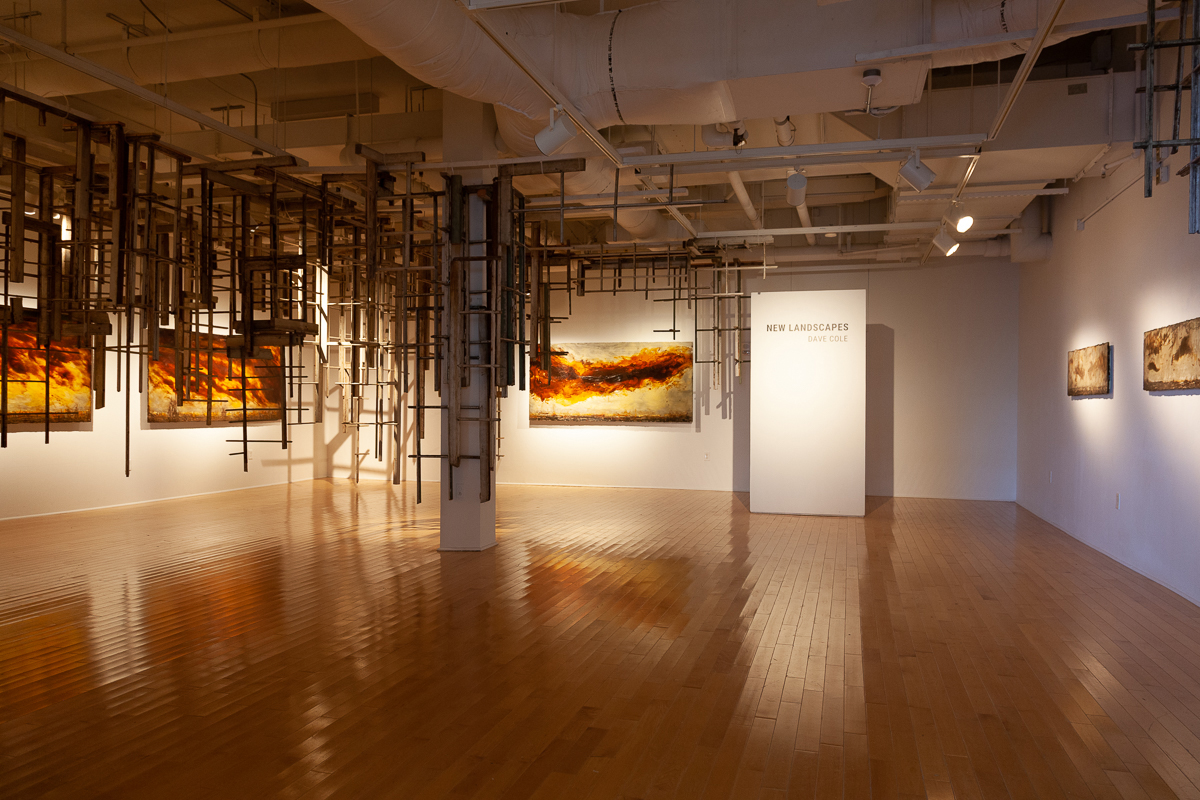 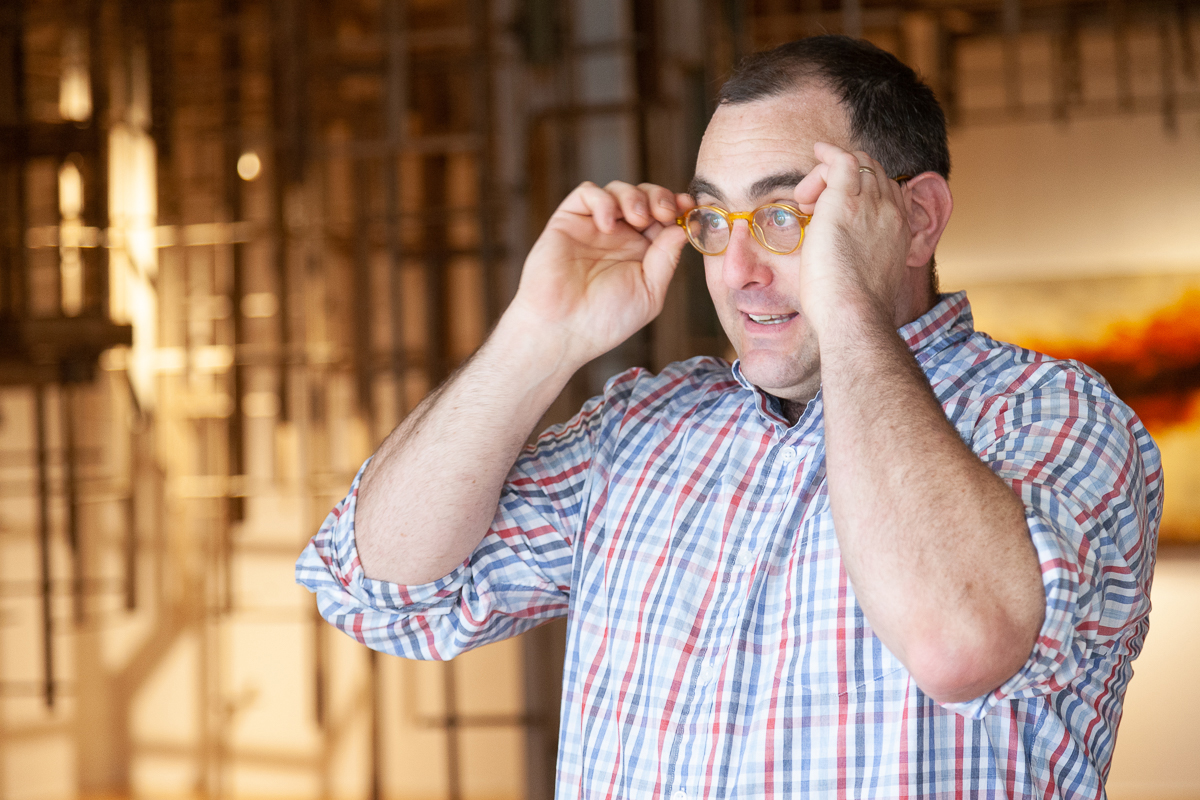 Known for exploring non-traditional materials in both his small and massive creations, (used bullets, excavators, steamrollers, but also a yarn made from dollar bills) Cole was raised on his family’s farm in New Hampshire and grew up learning to work with the tools he found in his grandfather's blacksmith shop. He received his BA at Brown University where he studied visual arts and remained in Providence for a decade after graduating. There, he became a fixture at The Steelyard, a groundbreaking arts and community organization which facilitated many of Cole’s large scale projects.

Cole has exhibited nationally and internationally, including exhibitions at the Smithsonian American Art Museum, Washington, The Museum of Arts And Design, New York City, The Museum of Fine Arts, Boston, The deCordova Sculpture Park and Museum, Lincoln, Massachusetts, The Aldrich Contemporary Art Museum, Ridgefield, Connecticut, The Norwegian National Museum, The Haifa Museum of Art and The National Museum of the Netherlands. Additionally, Cole presented his signature large-scale work, The Knitting Machine, that blurs the boundaries between craft, art and  performance at MASS MoCA, North Adams Massachusetts in 2005.

Cole’s work is part of both public and private collections domestically and internationally including the permanent collections of the Smithsonian American Art Museum, the Museum of Fine Arts in Boston and Brown University. Cole lives and works in Hudson, New York.

Dave Cole would like to thank the curator and Gallery Director Viera Levitt, as well as Nathan Chess, Bridget Gettys, Dennis Gordon, Jennifer Kahrs and Nancy Cole. Thanks also to Michael Swartz for creating the interactive tour of the exhibition and to gallery assistant, Rosalia Amato Bauer. Finally, a special thanks to CVPA Dean, Lawrence Jenkens, for his enthusiastic support of this exhibition.