We Are All Contagious 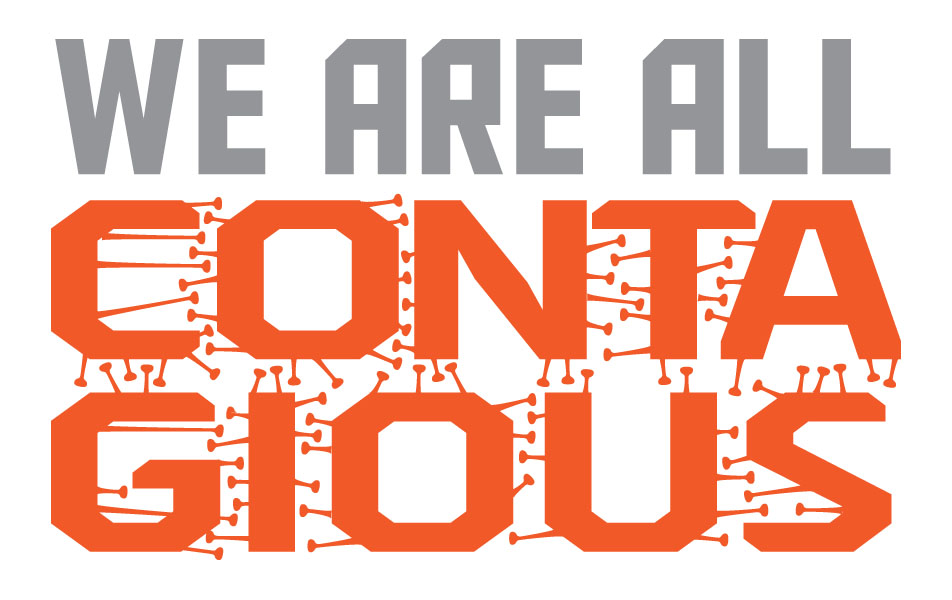 We are living at a time between "before" and "after"; a time we and our children will remember as a moment of seismic shift. What does this new "now" look like and feel like? Help us give shape and emotional clarity to this moment through your artistic expression about what we are losing, how are we changing, and what will be the visual "poster children," the totems of the COVID-19 crisis.

Will we remember face masks, empty streets, lines into grocery stores, lonely funerals, chaotic lack of preparedness, soothing press conference lies, visions of social inequality, racist names, examples of the clash between collectivism and individualism, belief and cynicism? Or, will there be images depicting a new awareness of the importance of inter-connectivity emerging from this time of social isolation? Will we awaken to an intentional togetherness, kindness and solidarity?

We are looking for the artworks commenting on our global pandemic, its everyday life, its archetypal realities, its political and medical urgency. Will the art of contagion be heroic, tragic, mythic, humorous? We are authoring our own history and future right now and this online exhibition, juried by the author and curator Nato Thompson, is being created to reflect that and to help us all to deeply engage in these times, the duration of which is as yet, unknown.

Art is good at so many things and one of them is to give a hint of the shape of the present. But you know, Walter Benjamin often liked to invoke the Klee painting of the Angel Novus who looked backwards while being blown forward into the future. The now is an elusive thing and perhaps never more so than at this particular historic moment, one moving ever so quickly, that will be so riddled with images of the past, but all the while, this pandemic, is shaping the future in dramatic ways. The knowledge of that with only the images and tools of the past to guide us makes for a complex landscape in the now.

I have spoken to so many artists and already there are those feeling that this is a dramatic wake up call. That this being still has awoken them to the manner in which their constant motion is part of the problem. This non-productive productivity that doesn't realize the power of the non action, the still, the family, the care, the slow conversation, the toast in the morning, the light of the headlights on the ceiling through the window, the boredom, the vinyl albums, the long talks with friends. Some are still forced to be busy because of the grind. Getting on a bus to work a low paying job to put your life on the line for an employer that may not care all that much about you. Being fired from your job as you have a child at home who cannot go to school in a city where being in public is like being ostracized from the start. Being a drug addict trying to get your fix, sleeping on the streets, left to die (again). By the time these applications come in the peak will be close in many places. The mortality all the more clear. An older generation (my parents age and older) will be hardest hit. So many stories left to tell. So much knowledge lost. So many families, lovers, friends, who must process their pain without seeing their loved ones, and unable to really deal with it until this crisis, that seemingly has no end, ends.

This opening reception will happen amidst the outbreak with the swirling of grey clouds still twisting in our crystal ball. Let us take solace that, in the very least, that is a battle where the people on the planet are on the same team. It really doesn't happen that often does it? Lets also take stock in the fact that rather than bemoan the lack of preparedness by the Trump administration or vast layoffs that came in such a wave you would think not a single business in America saves for a rainy day. Rather than wait for the global economy to decide you have a use, how about we begin to get back to some nuts and bolts basics of mutual aid. Perhaps in our respective communities, we simply put up a bulletin board and begin to have an economy around local need and low carbon footprint. If we aren't going back, then we can think to Buckminster Fuller who said that all we need to do is to get out of the way of nature. Are we able to get out of the way?

Karl Marx in his more famous and brazen text of the communist manifesto stated that the working class were the agent of history. So far, his bet has grown pretty far south. Instead, I suspect, he should have said, the agent of history that may potentially fell capitalism is a flu deriving from a bat. Which is also to say, good things are happening.

We must breathe, and prepare, and be caring and cared for. We must find aid in those around us and build structures for times, like these, that in essence, we are sort of always in. Because, ultimately, we are in this together. For so many, it seems, the end is coming and for the rest of us, the beginning that is coming will most certainly be unrecognizable to us by looking at the past.

Nato Thompson is the Artistic Director of Philadelphia Contemporary, an “independent and free-standing, a venue that celebrates the abundance of genre-bending, multidisciplinary practices that make up the field of contemporary art” founded in 2016. He was previously the Chief Curator and then Artistic Director at Creative Time in New York, where his exhibitions and projects included Paul Chan’s production of “Waiting for Godot” in post-Katrina New Orleans, which included free public performances of Samuel Beckett’s play, theatre workships, educational seminars, and more. Other major projects at Creative Time included Kara Walker’s A Subtlety, and the itinerant Creative Time Summits.

Thompson began his career as a curator at MASS MoCA, where he completed numerous large-scale exhibitions such as The Interventionists: Art in the Social Sphere, a survey of political art of the 1990s. His writings have appeared in numerous publications including Art Journal, Parkett, Cabinet, and The Journal of Aesthetics and Protest. He is the author of several books and catalogues, including Seeing Power: Art and Activism in the 21st Century (2015) and Culture as Weapon: The Art of Influence in Everyday Life.

Link to details and application (deadline has expired)