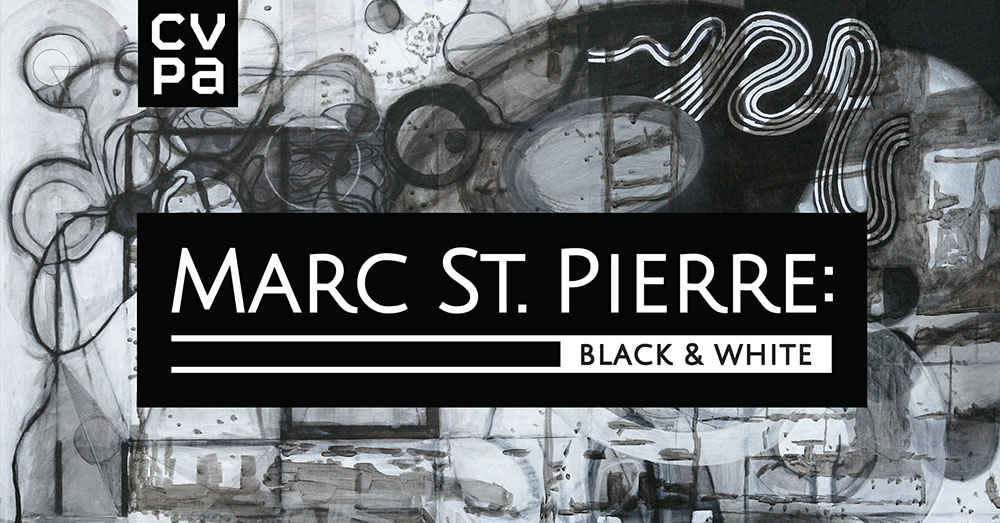 The Gallery Hours are 9 am to 6 pm, Monday through Friday.

Reception and celebration of Marc's life and work: Thursday, AHA! Night, August 12, from 6:00-8:00 pm in person at the University Art Gallery or via Zoom. Please register for your Zoom visit here.

On Thursday, August 12, as part of its AHA! Night events at Star Store Campus in Downtown New Bedford / University Art Gallery, we are celebrating the life and work of Marc St. Pierre. Speakers for the evening will include Nicole St. Pierre, Marc’s wife, local art critic Don Wilkinson, former Gallery Director Lasse Antonsen, as well as friends David Filipek and Nate Bekemeier. Guitarist and singer Joanne Doherty will be contributing her music.

The University Art Gallery in New Bedford is proud to present Black & White, an exhibition by a beloved UMass Dartmouth professor, the late Marc St. Pierre (June 23, 1952 - December 2, 2019), featuring a selection of mixed media drawings and collage with encaustic, as well as black and white photography.

Drawings created between 2008 and 2012, layered geometric elements, and abstract forms create a rich and poignant experience filled with wonder and exploration. They took inspiration from the ‘man-made’, architectural plans, diagrams, and maps of early explorers. In his artist statement from 2012, Marc said, “As the drawing process evolves, organic shapes and gestural lines are introduced over the groundwork in transparent overlays. This provides a counterpoint to the precision associated with the geometry and acts as a multiple exposure in photography. This pictorial space becomes a dialog of random marks that combines the constructed with the unsystematic. My drawings intend to move the eye within an abstract and shallow picture plane in a gradual release of time.”

The illusion of a ‘deep space’ in Marc’s work, invites visitors into a complex, hazy, and multi-dimensional world of collage and encaustics that are presented in smaller formats in the exhibition. Describing his process in 2017, Marc wrote, “First, I use a variety of printmaking processes as a departure for recording marks, surfaces, and layers. This becomes a collage groundwork that allows me to invent the abstract equivalent of land patterns such as the meeting point of landmasses and water, for example. Secondly, additional layers of tracings from actual maps and topographic patterns are introduced. These drawings become a physical overlay suspended in translucent wax.” Curiosity and the connection between the creative and scientific, as well as an equally strong interest in observing the tangible are also very much a part of Marc’s pinhole camera work shown at Crapo Gallery.

After his retirement in 2017, Marc was often seen counting the time of his exposures while photographing various New Bedford locations. According to Gallery Director, Viera Levitt, “Marc would talk about taking his pinhole photographs, leaving for these expeditions from the Star Store Campus with a repurposed box readied with a small hole for capturing images directly on the photo paper. He enjoyed telling stories to his impromptu audiences including the building guard, about the random passers-by, observing his ‘mysterious box’ on the ground, ready to ‘shoot’! It was indeed magic to see the one-of-a-kind monotypes he was able to capture with such simple, but skilled technique and his great patience for experimentation.”

The special reception and Celebration of Marc's Life and Work is planned for Thursday, AHA! Night, August 12, from 6 to 8 pm. Please register through the link above if you are joining us on Zoom. No registration is required for in-person visit.

Marc St. Pierre received his BFA from Laval University in Québec City, Canada, in 1976. He then studied in Paris, under Stanley William Hayter, one of the most significant printmakers of the 20th century, at Atelier 17, and spent a semester at the Centre Genevois de Gravure Contemporaine in Geneva in 1977. After receiving his MFA degree in 1979 from Southern Illinois University, he settled into New Bedford with his wife, Nicole to teach printmaking at Swain School of Design, a predecessor school to UMass Dartmouth.

Marc was a professor of printmaking at Swain School of Design from 1979 to 1988. When Swain merged with UMass Dartmouth in 1988, he taught printmaking and photography until his retirement as a professor in 2017, including serving as the chairperson of the Fine Arts Department for seven years, and the Director of the Freshman Program for four years. Over the years, Marc advised countless undergraduate and graduate students, many of whom became accomplished and well known artists in their fields.

Marc and his wife Nicole were active in the local art community, maintaining a studio at Cove Street and then at Hatch Street Studios since 1998. Marc and Nicole owned the Gallery 65 on William Street in New Bedford, where they also shared a studio. Besides being an accomplished printmaker and painter, Marc was also known for his pinhole photography, often using simple self constructed cameras. He conducted numerous workshops, among them at Haystack in Maine, Nocciano in Italy and Isle De Re in France. He was also an artist in residence at St. Michael's Printshop in Newfoundland, Canada in 1998.

The University Art Gallery would like to sincerely thank Nicole St. Pierre, as well as Antoine and Olivier St. Pierre, for making this exhibition possible.