Bioengineering major has excelled on the field and in the classroom 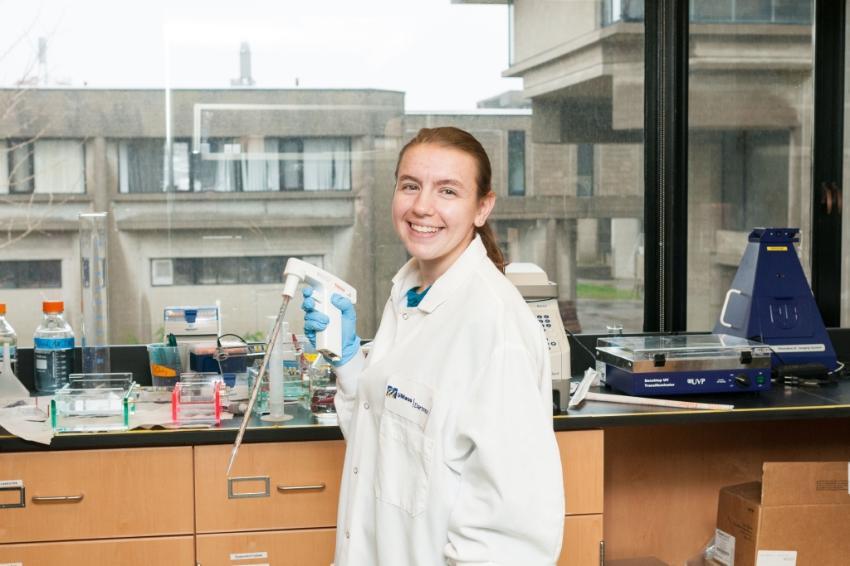 The phrase “student-athlete” barely describes all that bioengineering major Kayla Loycano ’19 has accomplished during her four years at UMass Dartmouth as an outstanding soccer player, student, and aspiring physician.

A tri-captain and defensive back for the Corsairs women’s soccer team, Loycano has completed her final season with a flourish. Already named the Little East Conference Women’s Soccer Defensive Player of the Week in October, Loycano was selected as a 2018 Google Cloud Academic All-District honoree by the College Sports Information Directors of America.

Loycano is one of 11—and the only Little East athlete—selected to the district Google Cloud team, comprised of student-athletes from nine schools in Massachusetts, Maine, New Hampshire, and Vermont.

After helping her team win five shutouts this season, putting away her soccer cleats will seem unusual for Loycano, who has played since she was four years old. “It was the sport I found most fun. You need both endurance and strength and I really liked the combination of both as well as the skills development,” she said.

The opportunity to play soccer while also majoring in bioengineering led the Chelmsford, MA native to UMass Dartmouth. She balanced her school work with her commitment to soccer by doing homework and studying on the bus to and from games. When she didn’t have games, she spent two hours a day at practice with an additional hour of training.

"The concepts and problem-solving skills you gain from engineering can be applied to any field."

While leading her team to a 7-7-5 overall season this year, Loycano also scored an academic trifecta.  Already the recipient of the Outstanding Freshman Award for the highest GPA in bioengineering, Loycano was named a Dean’s Scholar for having the highest bioengineering GPA during her junior year. She has been a Commonwealth Scholar during all four years at UMassD and was named to the Chancellor’s List for each of the six semesters she has completed, earning a GPA of 3.8 or higher.

“The sciences are where I belong. This is my skill set. I have an academic mind and a strong work ethic,” Loycano said. She is hoping that work ethic will lead her to medical school next fall. She is currently working as an EMT for Brewster Ambulance Service in Wareham and hopes to practice emergency medicine.

“I’m pretty determined. I feel I have so much experience to move forward and become a medical professional,” she said.

“Kayla is an exceptional young woman,” said her advisor, Associate Professor of Bioengineering Tracie Ferreira. “While Kayla is driven to achieve her own goals, she also has a passion for others and their success. She embodies all we would want in a physician and all of us in the Department of Bioengineering are proud of her accomplishments.”

For her capstone project, Loycano is studying whether a genetically moderated strain of the microbe R. opacus can break down chitin for conversion to biofuel. (Chitin is a polymer found in some fungi, crustaceans, fish, and amphibians.)

“UMassD was the right choice for me. I’m very glad I made the decision to come here,” Loycano said. “The experience has been fantastic. The faculty are amazing; they’re super smart and they make learning valuable so students want to be here.”

Loycano credits Ferreira for helping her succeed. “She’s so understanding and very compassionate. She is always there for you.”

While she is also a teaching assistant in the bioengineering lab and assistant treasurer of the International Society of Pharmaceutical Engineers,  networking organization, Loycano has gained experience beyond the classroom as a volunteer at Horizons for Homeless Children, a women’s shelter.

“The concepts and problem-solving skills you gain from engineering can be applied to any field,” she said. “This will definitely help me in my future."

"The concepts and problem-solving skills you gain from engineering can be applied to any field."