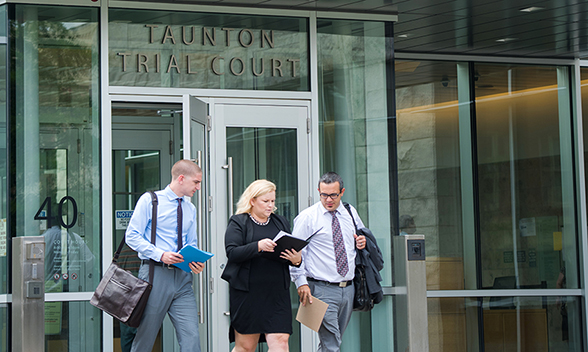 “This data demonstrates the extent to which our students, faculty, and alumni are committed to our mission of expanding access to justice,” Dean Eric Mitnick said.

The Class of 2017 completed more than 7,000 hours of pro bono and other law-related service to the community, and volunteered in 37 different offices, including private law firms, government agencies, and non-profit organizations.

Commencement student speaker Shayla Lors described her classmates as the ones who “will disrupt and dismantle the school-to-prison pipeline…the drafters whose ink will blot out the damaging effects of pollution on our environment…the advocates who will stand in the gap and fight for our neighbors who cannot afford the health care they desperately need…the ones who will turn this world right side up.”

The ABA data is the latest in several recent indicators of UMass Law’s commitment to serving the public interest. These include:

-- UMass Law winning the Massachusetts Bar Association's prestigious Public Service Award May 18. The award is given to individuals or institutions that have made a significant contribution to the preservation of MBA values, which include promoting access to justice for low-income individuals and making a strong legal education affordable to a diverse student population.

-- Mary Chaffee ’17 receiving the highly selective Library of Congress Burton Award for Distinguished Legal Writing for writing one of the top ten student law review articles in the country. Ms. Chafee, who also holds a PhD in nursing and is a member of the American Academy of Nursing, was honored for a scholarly article she wrote about the use of data extracted from legal cases to improve health care.

-- Justice Bridge, UMass Law’s solo practice incubator with offices in New Bedford and Boston, matching recent law school graduates with seasoned mentors and providing legal services to individuals who could not otherwise afford legal representation. The program has served thousands of clients since being opened a little more than two years ago.

“This data demonstrates the extent to which our students, faculty, and alumni are committed to our mission of expanding access to justice.”

“This data demonstrates the extent to which our students, faculty, and alumni are committed to our mission of expanding access to justice.”