BOSTON – Lauded as a visionary leader with a demonstrated commitment to innovation, academic excellence and the transformative power of higher education, Robert E. Johnson today was named chancellor of the University of Massachusetts Dartmouth by a unanimous vote of the UMass Board of Trustees.

Johnson, president of Becker College since 2010, was recommended for the UMass Dartmouth chancellorship by UMass President Marty Meehan.

“Robert Johnson is an accomplished, visionary leader with an entrepreneurial spirit and a proven commitment to student success,” said Meehan. “He has developed innovative strategies that have revitalized institutions and transformed lives, and I am confident he will help UMass Dartmouth reach new levels of excellence.”

What others are saying about Dr. Johnson's appointment

Under Johnson’s leadership, Becker College was named one of the “best institutions for undergraduate education” by The Princeton Review for five consecutive years.  He is credited with increasing enrollment to record levels, improving student success and elevating the reputation of the college.

“I am humbled and honored to be named chancellor of UMass Dartmouth and am truly thrilled to be a part of the world-class UMass system,” said Johnson. “I look forward to working with President Meehan as well as the faculty, staff and students of UMass Dartmouth.”

Johnson, who will be the first African-American to lead UMass Dartmouth, is a member of the state Board of Higher Education, vice chairman of the Massachusetts Technology Collaborative Board and chair of the Worcester Regional Chamber of Commerce.

“This is a win for UMass Dartmouth, the SouthCoast region and the entire UMass system,” said Robert Manning, chairman of the UMass Board of Trustees. “In Robert Johnson we have a world-class leader who will be committed to achieving UMass Dartmouth’s strategic goals and ushering this vibrant university into a new era of success and achievement.”

“We aimed high and attracted some excellent candidates, but Robert Johnson clearly stood out from the pack,” said Trustee R. Norman Peters, chair of the UMass Dartmouth Chancellor Search Committee. “We were impressed by his obvious passion for higher education, his consistent record of achievement and his ability to accomplish key objectives — from growing revenues to increasing graduation rates — all while keeping his pulse on the day-to-day student experience. We believe he will be a boon for UMass Dartmouth and the entire SouthCoast region.”

A native of Detroit, Mich., Johnson holds a doctorate in higher education administration from Touro University International, a master’s degree in education administration from the University of Cincinnati and a bachelor’s degree in economics from Morehouse College. Prior to becoming Becker College’s president, he served as senior vice president of Sinclair Community College, vice president of enrollment management at the University of Dayton, vice provost at Oakland University and executive director of enrollment management at Central State University.

“This is an exciting new chapter for me and my family, though it is a bittersweet time, as I have very much enjoyed spending the past seven years at Becker College, and being part of the vibrant Worcester community,” said Johnson. “I am looking forward to this new post; however, for the next few weeks, I remain committed to advancing the Becker College value proposition and to supporting the staff and students there through Commencement.”

Prior to voting to appoint Johnson chancellor of the Dartmouth campus, members of the Board of Trustees praised the selection.

“He has a commitment to preparing young people for successful careers in a rapidly changing economy,” said Secretary of Education Jim Peyser, a UMass trustee. “He has a strong sense of what is required, not just academically but in terms of personal preparation for success in an economy and a world that is changing so rapidly.”

“He is a tremendous talent and a great leader and a phenomenal human being. What he achieved at Becker during his tenure has been absolutely [nothing] less than remarkable,” said Trustee Henry Thomas. “He’s respected highly by the institution that he served as well as the people in the community and the whole region, really. He’s a dynamite individual.”

“Our futures are inextricably tied when it comes to institutions in the broader community and the region, and he believes in mutually assured successes, and I think that says a lot about his personality,” said Trustee Micahel O’Brien, former Worcester City Manager. “His enthusiasm is contagious. … He’s a special person. … He sets out a vision, a plan for the institution. And he leads by example.”

Addressing the trustees, Johnson became emotional when reflecting on the moment.

“This is an honor for me for a number of reasons, but most importantly for my dad,” said Johnson. “When I was a young boy, he used to talk about the University of Massachusetts. The greatest joy was when I called him last night and told him I was coming here.”

“This is an honor for me for a number of reasons, but most importantly for my dad. When I was a young boy, he used to talk about the University of Massachusetts. The greatest joy was when I called him last night and told him I was coming here.” 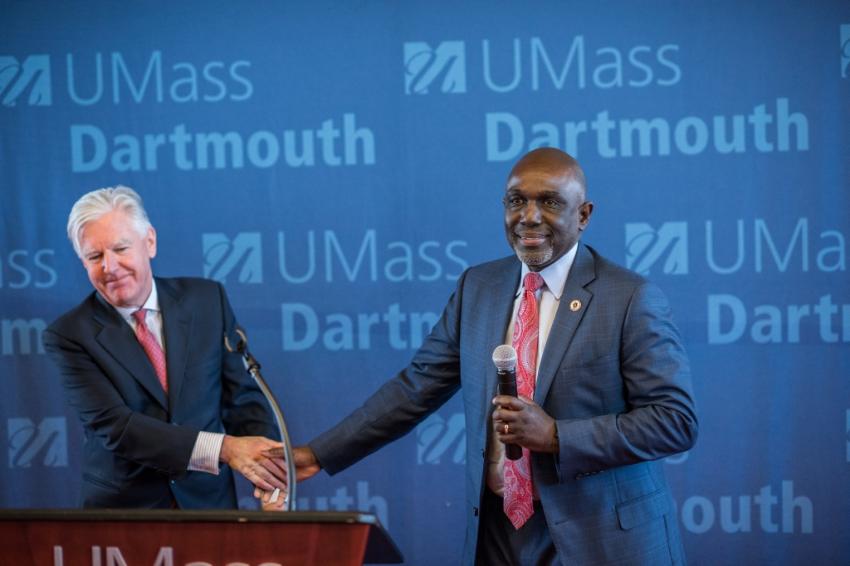 A 16-member committee comprising students, faculty, alumni, staff, community representatives and members of the UMass Board of Trustees was formed in September 2016 to help select a new chancellor for UMass Dartmouth.

The search committee sought input on the qualifications and characteristics considered important in the new chancellor, advertised the position nationally and retained the Boston-based executive recruitment firm Isaacson, Miller to assist in the search.

As part of the process, the search committee held open public forums at UMass Dartmouth and in Fall River and New Bedford. Peters, the committee chairman, said the message from those forums was clear: The community wanted a chancellor who was committed to the campus and willing to be fully engaged in the SouthCoast region.

Throughout the course of the search process, Isaacson, Miller communicated with 165 prospective candidates, interviewed 40 candidates and presented the credentials of those candidates to the search committee. The committee chose to interview 12 candidates, leading to a designation of three finalists: Johnson, along with James P. Lentini, senior vice president for academic affairs and provost at Oakland University (Mich.), and Philip K. Way, provost and vice president for academic and student affairs at Slippery Rock University.

Each of the finalists met with President Meehan and visited the UMass Dartmouth campus to meet with various members of the community.

Meehan considered feedback submitted by the campus community in making his recommendation.

“The committee set out to find candidates who had strong records of higher education leadership, were effective communicators and expressed a willingness to become deeply engaged in the SouthCoast community,” said Meehan. “Based on that criteria, the clear choice to lead UMass Dartmouth is Dr. Robert Johnson.”

UMass Dartmouth, the state’s only public research university south of Boston, was recently designated as a doctoral level research institution by the national Carnegie Classification of Institutions of Higher Education and ranked as a top tier university by U.S. News & World Report, making UMass one of the few university systems to have all of its undergraduate campuses so acclaimed.

With a long tradition of civic engagement and commitment to the SouthCoast region, UMass Dartmouth is rated among the top 1 percent of universities and colleges nationwide on the President’s National Education Honor Roll for Community Service, with students contributing more than 230,000 hours of community service annually.

In addition to the 710-acre Dartmouth campus, other university sites include the School for Marine Science and Technology on the waterfront in New Bedford, the Center for Innovation and Entrepreneurship in Fall River, the School of Law in Dartmouth and the College of Visual and Performing Arts in downtown New Bedford.

UMass Dartmouth employs more than 1,400 people, creates more than 2,800 non-university jobs and has an economic impact measured at $517 million.

“This is an honor for me for a number of reasons, but most importantly for my dad. When I was a young boy, he used to talk about the University of Massachusetts. The greatest joy was when I called him last night and told him I was coming here.”