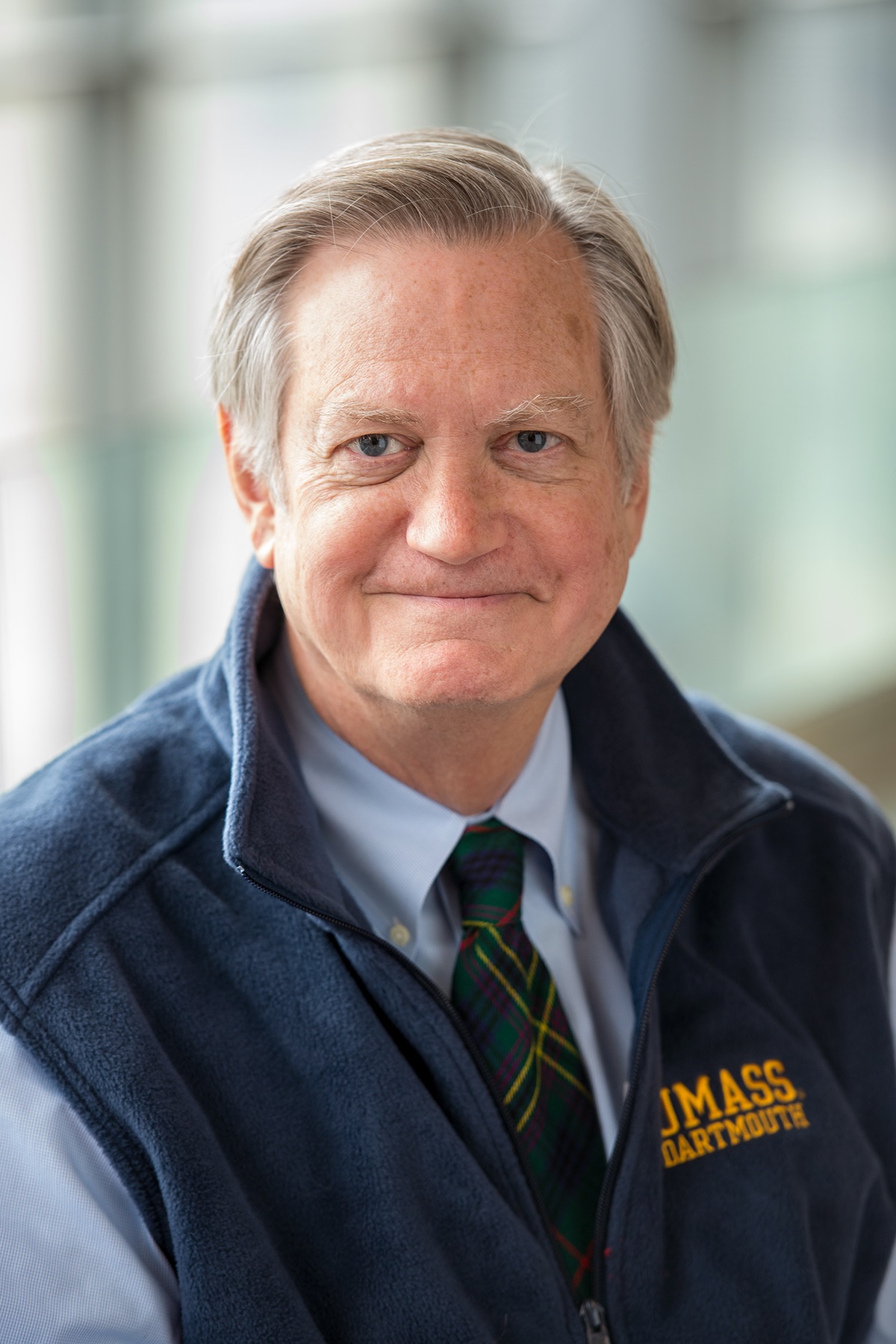 I want to begin by thanking Rick (Kidder – President of the Chamber) for the invitation to speak to you today.

This is going to be a talk about first impressions. Just yesterday marked my three-month anniversary as interim chancellor so I still have a lot of listening and learning to do, but there are some issues that have presented themselves in high definition.

I’d like to share them, trusting that you give me the benefit of the doubt because I am still new to UMass Dartmouth…having spent the last many years in far off places like Pennsylvania and Maine….. bringing the perspective of my experience at smaller, private institutions…..and influenced by my  background as an historian.

I believe I am fortunate to come here with no preconceived notion of how an emerging public research university should behave or what the expectations should be.

So, here are my initial observations:

1. UMass Dartmouth is a powerful engine for social mobility in this region and the Commonwealth.  It transforms lives and trains well-educated men and women who thrive as skilled members of the workforce, as business-building entrepreneurs, as the heads of stable families and as good citizens and taxpayers.
2. UMass Dartmouth has a massive economic impact on this region.
3. UMass Dartmouth has profoundly enriches the civic and cultural life of our region.  And….
4. UMass Dartmouth and this region are grossly underestimated. And if we don’t start to work together to advance our shared interests, we will continue to be undervalued and underserved.

Now, let me expand on these points.

First, let’s talk about social mobility.  Fifty percent of UMass Dartmouth students are first generation college students; 40 percent are Pell Grant eligible; many of them hold down jobs and support families while pursuing degrees in nursing, engineering, business, and other fields of study.  They understand that this is their shot.  And our faculty respect their determination.  I’ve heard repeatedly from our faculty and staff  “we go to the mat for our students.” I believe them.  Like the poured concrete buildings of our campus, our students are tough, they have grit, and they can stand up to a lot of punishment.  I’ve only been here three months, but I’m really really proud of them, and you should be too.

Now, about that economic impact:  UMass Dartmouth has a half-billion dollar impact on the Massachusetts economy, according to a study issued by the Donahue Institute last week. Most of that impact, of course, occurs right here on the SouthCoast.

The impact is generated by the money that the university, its faculty and staff and its students spend on goods and services. Our 9,000 students, 1,500 employees and the university itself spend enough to create and sustain more than 2,200 private sector jobs.

These include the construction jobs created by the ongoing expansion of our School for Marine Science in the south end of New Bedford and the expansion of our Charlton College of Business on campus.

These include jobs at businesses throughout the region, from this facility (which has been the site of so many UMass Dartmouth events) to Mirasol’s Café down the street, which must sell thousands of cups of coffee and sandwiches to our students every year.

But our real economic impact goes far far beyond that half billion dollars. Not measured by the study is the economic impact of UMass Dartmouth research and outreach activity:

-- the science that has helped sustain the commercial fishing industry in New Bedford and is helping coastal cities and towns manage their very expensive wastewater treatment challenges.

-- the research related to improving wind energy technology as this region organizes itself to be a national hub of that emerging industry.

-- the Center for Innovation and Entrepreneurship in Fall River, which is incubating 20 tech companies right now and making its protoyping expertise available to startups throughout the region.

-- And, of course, the most powerful economic impact that UMass Dartmouth has on this region and the Commonwealth is attracting, developing, and retaining talent – from students to faculty – who are needed to fire up the innovation ecosystem here.

So, three months on the job has been plenty of time for me to grasp the immense economic impact UMass Dartmouth has on this region.

What about that civic and cultural enrichment I mentioned?  Some of it can be  quantified, and some of it is qualitative:

•    UMass Dartmouth is the top university in the nation with programs related to studying and celebrating the contributions of the Portuguese-speaking world to global culture and Portuguese-Americans to our society.

•    Most of our colleges are connected, in one way or the other, to K-12 schools in the region, working to excite young people about science, the arts, and community service.  The Jane Goodall event that engaged so many elementary, middle, and high school students in conservation programs is one outstanding example.  Our mentoring of the local highschool robotics team that went to the national competition in St. Louis is another.

Three months on the job has been enough to prove to me the power of UMass Dartmouth to strengthen the civic fabric of this region.

4. Now, let me turn to my final observation: UMass Dartmouth and this region are underestimated.

As the former President of a private, liberal arts college, I have a first-hand understanding of the value that private higher education brings to society. But I have always had great respect for the public higher education system of this nation, and so do my peers around the country.

Public higher education was created by Abraham Lincoln and a Senator from Vermont, Justin Morrill, at a time of great national unrest. They recognized that the higher education of the citizenry was critical to unifying the nation, preserving the democracy, and expanding economic opportunity across the land.

So, it has been surprising to me that here in Massachusetts – the epicenter of higher education –  public colleges and universities are so overshadowed by the privates institutions, and it seems that the value of UMass Dartmouth is not fully appreciated.

Reading some of the history of the University of Massachusetts and UMass Dartmouth, I have come across multiple attempts to hold UMass back in order to protect more private and parochial interests.

Private institutions fought the creation of the UMass Medical School 50 years ago. The Medical School is now a national research powerhouse and highly respected for its excellence in training primary care physicians.

Just a few years ago, as you are well aware, private law schools in Boston organized to stop the creation of the UMass School of Law here in Dartmouth to protect their own market share.

And just recently we had the Pioneer Institute criticizing UMass for recruiting out-of-state and international students and providing first-rate facilities to students.

The idea that private institutions would consciously work to impede the goals of the public institutions is a new concept for me. I must tell you that it is disappointing.

What is especially disappointing is the contention that somehow UMass is abandoning Massachusetts students as we diversify our student body.

But, bringing out-of-state and international students to our campus makes financial and academic sense for our university and business sense for the region.

Our job is to prepare our students to prosper in a global economy where they, like you, will need to compete and collaborate with people of different cultures, religions, and political perspectives. We would be guilty of educational malpractice if we did not expose our students to their peers from other states and nations.
And, like most of New England, Massachusetts has a shrinking population of college-aged students.  By bringing in out-of-state talent and introducing them to the opportunities and advantages of our area, we counteract the brain drain that would inevitably happen if we did not.

Most of you know that business success depends on attracting, developing and retaining talent. That means growing our own close to home, but also importing talent from elsewhere.

That is what we do as a research university.

Our evolution as a research university is critical to the aspirations of this region to be a full participant in the innovation economy of Massachusetts.

Yet, there is evidence that this region is not considered worthy of being a full participant.

You can see what I’m talking about when this region is the only one that does not have commuter rail service to Boston…..or you had to fight just to establish a public law school here.

Today, we are faced with yet another challenge. Our internationally accredited Charlton College of Business, whose MBA program has grown dramatically in recent years, wants to begin offering a PhD in Business, like the other UMass campuses. Local business leaders are enthusiastic about the benefits this would provide to the local talent pool.

But, for some mysterious reason, we cannot get approval from the Board of Higher Education.

This just shows me and probably reminds you that this region is always forced to work harder for everything it deserves.

I can promise you this, from the students, faculty, staff, and community partners I have met over the past few months UMass Dartmouth will keep working harder than ever to succeed.

"Like the poured concrete buildings of our campus, our students are tough, they have grit, and they can stand up to a lot of punishment. I’ve only been here three months, but I’m really really proud of them, and you should be too."

"Like the poured concrete buildings of our campus, our students are tough, they have grit, and they can stand up to a lot of punishment. I’ve only been here three months, but I’m really really proud of them, and you should be too."

Call for Papers: PLCS Special Issue "Past and Present Epidemics and Other Devastations Across the Portuguese-Speaking World" "Expressions of Portuguese Immigration in North America: Cultural Heritage as a Catalyzing Tool". A public webimar by Professor Walter RossaWe Are All ContagiousA message from Chancellor Johnson on the killing of George FloydCenter for Marketing Research releases new report on school choice