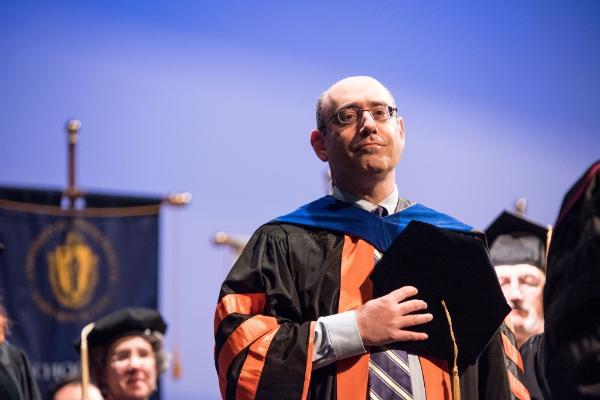 Eric Mitnick has been named Dean of the School of Law at UMass Dartmouth after leading the Commonwealth’s only public law school to American Bar Association accreditation as interim dean. Dean Mitnick has served as interim Dean since July 1, 2016, succeeding Dean Mary Lu Bilek. He will begin his permanent appointment on October 1, 2017.

“Eric Mitnick has proven himself to be a strong, dynamic leader with a passion for UMass Law and its critical social justice mission,” said UMass President Marty Meehan. “I witnessed Dean Mitnick’s dedication to legal education and to students firsthand during the law school’s successful bid for ABA accreditation last year, and I am confident that he will continue to lead UMass Law to new heights. The law school is lucky to have him at the helm.”

“Dean Mitnick’s commitment to legal education that advances the cause of justice is exceptional,” said UMass Dartmouth Chancellor Robert E. Johnson. “With growing enrollment, an outstanding faculty and staff, students with a passion to right wrongs, and Eric’s many talents, UMass Law has a bright future.”

UMass Dartmouth Provost Mohammad Karim noted that Dean Mitnick “also practiced law from 1991-1995, a fact extremely important to the School of Law as it continues to fulfill the goal of producing graduates who are ready for the practice of law.”

“It is a privilege to be chosen to lead the Commonwealth's law school,” said Dean Mitnick “Our UMass brand is global, our identity as Massachusetts' only public law school is unique, and our mission of educating students to pursue justice in any field of law is imperative.  UMass Law offers a value proposition second to none, and the institution's potential is only now starting to be recognized.”

Just in the last year, UMass Law students received the Massachusetts Bar Association's Oliver Wendell Holmes Scholarship, the Library of Congress Burton Award for one of the 10 best student law review articles in the country, and a Rappaport Fellowship for the third year in a row. In addition, student scholarly articles have been accepted by the Harvard Journal of Law and Public Policy, the UCLA Women's Law Journal, and the Biotech and Pharma Law Review.

UMass Law students have also contributed more than 100,000 hours of pro bono legal services to the community since the school’s establishment in 2010, which helped to school earn the Massachusetts Bar Association’s 2017 Public Service Award. Meanwhile, UMass Law placed 3rd in the nation for the percentage of 2016 graduates receiving full-time, long-term public service jobs.

Dean Mitnick served as Associate Dean for Academic Affairs from 2014-2016.  He received his undergraduate degree from Cornell University, law degree from the University of Michigan, and a master’s and PhD from Princeton University in the fields of Public Law, Political Theory, and American Politics. Dean Mitnick is an accomplished scholar in the areas of constitutional law, rights, socio-legal and multicultural theory and is author of the book, Rights, Groups, and Self-Invention: Group-Differentiated Rights in Liberal Theory (2006).

“It is a privilege to be chosen to lead the Commonwealth's law school. Our UMass brand is global, our identity as Massachusetts' only public law school is unique, and our mission of educating students to pursue justice in any field of law is imperative."

“It is a privilege to be chosen to lead the Commonwealth's law school. Our UMass brand is global, our identity as Massachusetts' only public law school is unique, and our mission of educating students to pursue justice in any field of law is imperative."