Next step: PhD in physics/astrophysics

Tia Martineau '18 has combined her love of science with a passion for art; she has served as a role model for girls who are interested in STEM fields and has followed her own research interests in astrophysics through internships. Next fall, she will pursue a PhD in physics/astrophysics at the University of Florida.

Early love for science and space

"I remember wanting to be a scientist but also wanting to keep art around from a very young age," Tia said. "I wanted to illustrate children’s animal books, because I wanted to observe the animals in a scientific manner while taking the time to depict them as the beautiful creatures they are.

"I also really loved space. My high school physics teacher told the class that if we ever want to work for a place like NASA, we have to be at the 'top of the top.' He pushed me to do what I thought at the time was unthinkable. He deserves all the thanks in the world for showing me my potential, teaching me perseverance, and pushing me to overcome the boundaries I set for myself.

"I was originally a dual major in digital media and physics, but I eventually found that physics was the better fit for me. Art will remain a hobby of mine."

I am very excited for the opportunity to seek out an advanced degree and continue doing what I love.

Tia joined an NSF research project at the University of Washington at Seattle that focused on detecting elusive dark matter particles.

In the summer of 2017, Tia joined a research project that focused on detecting elusive dark matter particles at the University of Washington at Seattle. Dark matter makes up 85% of the matter in the universe and yet is very poorly understood.

Although she also had opportunities to study spiral arms patterns in galaxies (at the Keck Northeast Astronomy Consortium) or near-Earth asteroids (at the NASA Ames Research Center) Tia chose to go to Seattle because of her deep interest in dark matter.

The connection between physics and art

Tia had a chance to combine her interests in physics and art when she designed the mural for Prof. Gaurav Khanna's supercomputer trailer in 2016.

"Dani Kumor, a friend of mine and illustration major, was working with Prof. Khanna on the mural for the trailer," Tia said. "Once Dani became too busy, with her help and support, I took over the project."

She added: "I think art and physics are more related than people think. Both are methods of problem solving. Science presents you with a clear-cut problem that needs a creative solution. When you have an art-related assignment with no boundaries or given requirements, coming up with that problem is just as, if not more, difficult than finding the solution."

Role model for girls in STEM

Tia also volunteered with the Kaput Center for Research and Innovation in STEM Education at their STEM4Girls event. More than 100 girls, ages 10-15, came from southern Massachusetts to experience science, technology, engineering, and mathematics via workshops throughout the day.

"I hope that young women can look up to people like myself and see that there are women in higher rankings," she said. "Maybe that will reassure them that anything is possible. I also volunteered with Prof. Fowler’s STEM team at the Quinn Elementary School. I went into classrooms promoting involvement in the sciences through STEM curriculum and experiments for kids in the 5th grade." 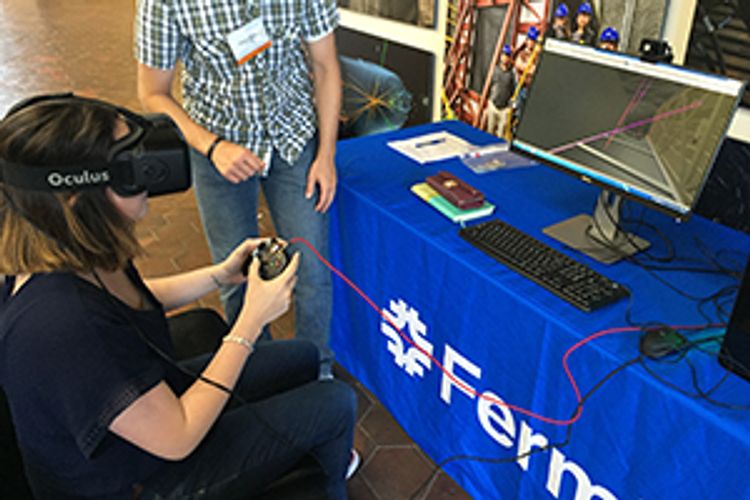 Tia observing particles in virtual reality as part of a test run for Fermilab's MicroBooNE experiment.

In the summer of 2016, Tia interned in Batavia, Illinois, at the Fermi National Accelerator Laboratory (Fermilab). She worked with Dr. Alan Robinson on error analysis in dark matter research.

Her work, she said, involved "developing an open source and extendable calculator in order to determine the reaction rate from (alpha,n) nuclear reaction yields, which will measure with more accuracy the generation of neutrons in detector materials for dark matter and other similar experiments."

After graduating in December, Tia accepted a 5-month position teaching physics at her former high school. In the fall, Tia will be attending the University of Florida to pursue her PhD in physics/astrophysics.

"Although I am not 100% sure I will be sticking to dark matter research, I am very excited for the opportunity to seek out an advanced degree and to continue doing what I love to do," she said. "I may end up trying out some gravitational waves research, since I have been invited to do work for the LISA mission [NASA's Laser Interferometer Space Antenna], but I don't have to be certain about my research interests for at least another year or so."

I am very excited for the opportunity to seek out an advanced degree and continue doing what I love.

Physicists and astronomers conduct theoretical, experimental, and computational studies to explore the fundamental properties and laws that govern space, time, energy, and matter on scales ranging from atoms to the universe.