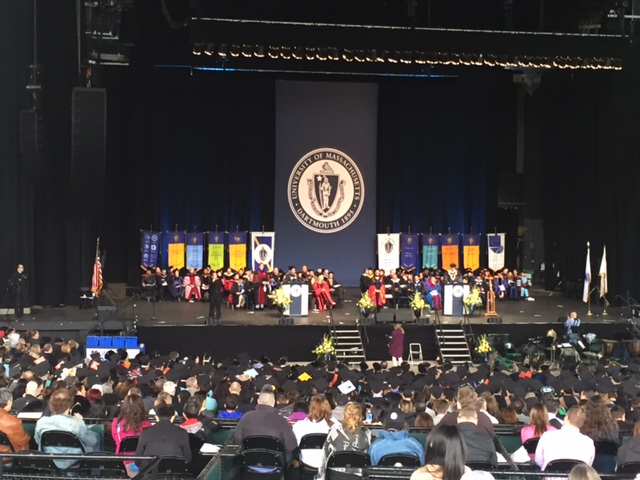 The event, which attracted 2,000-plus students, family members, faculty, staff, and friends, was held at the Xfinity Center in Mansfield.

Interim Chancellor Peyton R. Helm, who has led the university for the past year and a half presided over the ceremony. Dr. Helm told the Class of 2017 that in his time at UMass Dartmouth, “I've come to know a faculty and staff that's completely dedicated to creating opportunities for men and women who want to learn…I have met remarkable, optimistic, hardworking students who often have surmounted… obstacles to achieve their goals.”

Dr. Helm added that “UMass Dartmouth students gave more than 240,000 hours of service to the community to this year... you give us all hope.”

Dr. Robert E. Johnson, former president of Becker College in Worcester, has been appointed chancellor and will officially begin his duties on July 1.

MacArthur Foundation Managing Director Cecilia Conrad was awarded an honorary degree, “Because with intellectual vitality and passionate commitment you continue to find and foster the promise in others.” Dr. Conrad’s academic research has focused on the effects of race and gender on economic status, and in her role at the MacArthur Foundation she has worked to select individuals deserving of prestigious fellowships for their creative endeavors.

In her address to the graduates, Dr. Conrad noted that this was just her second commencement address, her first being in 1972 at her high school graduation. “Creativity is about making the world a better, happier, more enriched place,” she said, adding, “failure-tolerant leadership requires taking risks, experiments, and allowing mistakes to happen as part of the creative enterprise.”

Author and LGBT activist Jennifer Finney Boylan, the inaugural Anna Quindlen Writer in Residence at Barnard College, was awarded the Chancellor’s Medal in honor of her “unyielding commitment to recognizing and protecting the core truth of every individual.” Dr. Helm described her as an  "elegant, thoughtful and powerful voice for those who have too long been voiceless."

Michael Savaria of Westport, who was awarded his doctoral degree in Education Leadership and Policy Studies, earned the honor of addressing his classmates. “If we want society to be better, we need to get involved to work towards making it so,” he said. “You are important in this world. You are essential. Embrace your power and share it.”

Alumni Association President Dr. Daniel DeOliveira said, "as you embark on the next phase of your life, remember you will be connected to 50,000 alumni worldwide. Remember your days here at the university, for these are the memories that will last a lifetime."

Members of the Class of 2017 (graduate and undergraduate)

Meet more members of the Class of 2017

Moving to the Xfinity Center

The decision to move the event from the main campus to the Xfinity Center was made in consultation with student and faculty leadership as the ceremonies have outgrown the 4,000-seat on-campus amphitheater.

Over the past few years, UMass Dartmouth has needed to limit the number of family members allowed to attend the ceremonies and split up the colleges into smaller ceremonies. This meant many classmates were unable to attend the same ceremony together. The move to the Xfinity Center will also allow for much improved security, parking and traffic flow.

PreviousNext
News and Public Information, College of Arts and Sciences, Charlton College of Business, College of Engineering, College of Nursing & Health Sciences, College of Visual and Performing Arts, School of Education, School for Marine Science and Technology
Edit this content