The event brought together academics, business leaders, and government officials to focus on collaboration

On Friday, June 28, UMass Dartmouth and the SouthCoast Development Partnership brought together more than 125 regional business leaders, marine science and technology firms, researchers, and elected officials from across Southeastern Massachusetts and Rhode Island to the UMass Dartmouth School for Marine Science and Technology in New Bedford.

The forum provided regional stakeholders with an update on the first phase of the three-year, U.S. EDA-funded Southeastern Massachusetts Marine Science and Technology Corridor project. Currently, the UMass Dartmouth Public Policy Center is conducting a comprehensive industry analysis that will inform a strategic plan to brand the region, drive research, and expand the region’s labor pool.

“I firmly believe that our region is poised to write a new and exciting economic chapter thanks to the civic and business leaders present in our coastal communities,” said Chancellor Robert E. Johnson during a welcome video.

The event also featured presentations from Vineyard Wind, Anbaric Renewable Energy Center and the Commercial Development Company who are redeveloping Brayton Point, and the New Bedford Economic Development Council and Port Authority. Each presentation highlighted the fact that the region is seeing significant economic development due to its coastal assets.

“Our area has all the ingredients for a robust blue economy corridor, including public-sector investment, emerging academic talent, and buy-in from private industry, events like our gathering today help to bring those key ingredients together, connecting inspiring plans with plans for an aspiring workforce to support them,” said Congressmen William R. Keating, whose district includes SouthCoast, Cape Cod, and South Shore Communities. “I am proud to have helped UMass Dartmouth secure the federal Economic Development Administration grant that kick-started this effort, and I look forward to continued collaboration with the SouthCoast Development Partnership as we maximize the region’s economic potential.”

“Along the SouthCoast, we will raise a generation of residents with no memory of two soaring cooling towers, but instead of a Blue Economy that powers homes, schools, businesses and livelihoods. Lifting the offshore wind energy industry off the ground requires federal and local government working closely with businesses and academia,” stated Congressman Joseph P. Kennedy III whose district includes parts of the SouthCoast. “With watchful eyes on Southeastern Massachusetts and Rhode Island, we can become national leaders in this emerging industry that will provide clean energy, create jobs and move us forward.”

“Southeastern Massachusetts has the potential to become the nation’s offshore wind industry hub. With this in mind, I have recently sponsored legislation designed to maximize the Commonwealth's wind resources. However, it is only with a regional approach that we can fully realize the economic development benefits of this industry,” said Speaker Pro Tem Pat Haddad, whose district contains Brayton Point in Somerset. 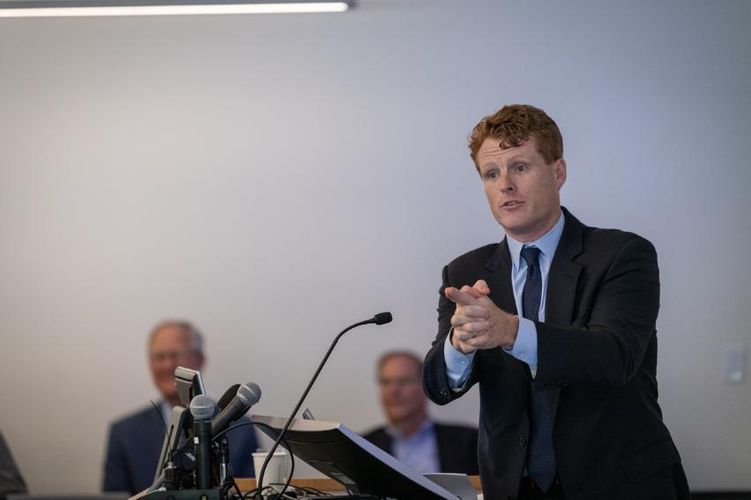 SouthCoast Development Partnership Executive Director Hugh Dunn closed the program by highlighting that “By coming together, we can better apply the talent, creativity, and tenacity of this region to create a marine science and technology corridor – of connected companies and institutions - at the forefront of ocean technology advances on the eastern seaboard.” Dunn stated that due to the EDA investment, “This region can leverage its two most valuable assets; our people and our coastline.”

The next update on the project is slated for late October 2019.