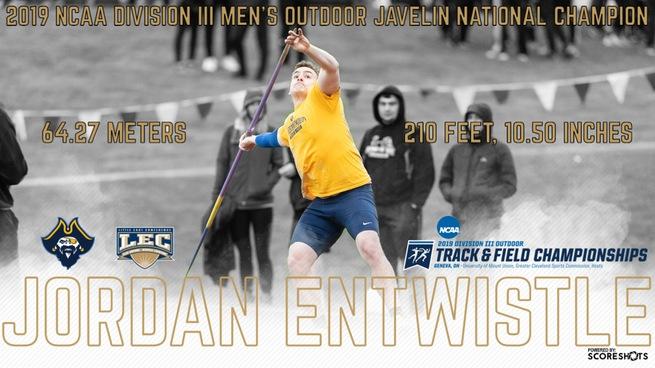 Entwistle, who entered the competition as the top national seed in the event, claimed the Corsairs’ 12th overall individual national crown in all sports and first in 11 years, as his fourth attempt of the night produced the winning mark of 64.27 meters/210 feet, 10 ½ inches and topped runner-up Grant Smith of Transylvania by nearly two feet.  Jordan, who earned All-America honors with a fourth place finish at last year’s NCAA outdoor championships, becomes the second two-time All-America men’s javelin performer in school history, as Keith Rose first achieved that feat in 1996 and again in 1997.

“One thing Jordan did throughout the year was to remain consistent and continue to build to a strong finish with each throw, and that was certainly the case tonight,” first year Corsair Head Coach Mike Salem said of Entwistle’s performance.  “He let it all go on his first throw of the finals, and he actually didn’t get all of his strength behind it.  There was a little tension on the final throw as (Smith) was the last competitor, but it all worked out and Jordan has forever earned the right to be called a well-deserved national champion.”