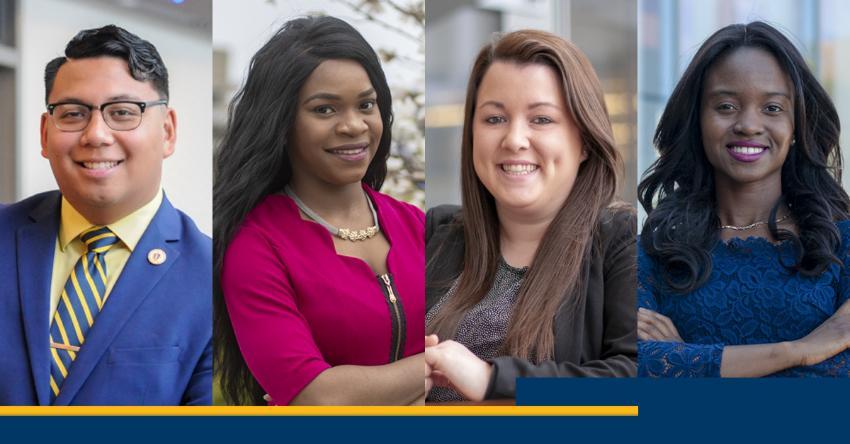 UMass Dartmouth has announced the student speakers for the 2019 Commencement ceremonies that will be held on the following dates and times:

The student speakers are as follows:

Silavong Phimmasone, of Springfield, Massachusetts, has served the last year as a student trustee on the University of Massachusetts Board of Trustees. The younger of two children to his widowed mother Leslie Phimmasone, he will receive his bachelor’s degree in Management Leadership with a minor in Operations Management. Over the course of his college career, he has worked as an Assistant Manager for Olympia Sports, a Mobile Expert/Dealer for T-Mobile, and a Banker for Citizens Financial Group. He has also served the U.S Army during his time as a student. Even while maintaining full work and class schedules, he has served as Vice President to the Asian Student Association, a Student Government Association Senator for the Charlton College of Business, a member of the university’s National Model United Nations Chapter, Corresponding Secretary to the Public Speaking & Professional Development Network, a Resident Assistant, and the Class of 2019 Vice President. Mr. Phimmasone plans to continue working for Citizens Financial Group upon graduation and eventually hopes to assist students who are financially struggling to gain access to higher education.

Nneoma Ugwu, a native of Port Harcourt, Nigeria, has three brothers and is the only daughter of Dr. Joy and Dr. Maxwell Ugwu. Graduating at the top of her class, Ms. Ugwu won the Professor Allan L. Campbell Civil Engineering Award for achieving the highest GPA within her Civil Engineering cohort. Outside of the classroom, Ms. Ugwu has conducted research with the National Science Foundation and worked as a quality control intern at PJ Keating in Acushnet. For her senior capstone project, she led a redesign of the Mashpee Rotary that is proposed to be implemented in fall 2019. Ms. Ugwu values the leadership skills she has developed as the Vice President of Engineers Without Borders, including volunteering in Panama on an aqueduct project that provided water to over 300 locals. She served as the Vice President of the African Students Association and as a Senator for the National Society of Black Engineers. Ms. Ugwu also worked for two years as a Resident Assistant and one year as a Senior Resident Assistant. Ms. Ugwu has traveled to five continents and hopes to visit all seven. After graduation, she aspires to complete her master’s and doctoral degrees and return home to Nigeria to improve her country’s roads and infrastructure.

Casey Shannon, a native of Taunton, Massachusetts, served as the Business/Conference Editor of the UMass Law Review during the 2018-2019 academic year and collaborated with faculty, staff, legal professionals, and state legislators to present the 2019 Law Review Symposium, Navigating a New Reality: A Multi-Platform Look at Media and the Law. She has been deeply involved in community outreach throughout her life, including her mentoring of the Mock Trial Team at the Wheeler School in Rhode Island, supporting the United Way of New Bedford, and many other local endeavors. Ms. Shannon is grateful for the unwavering support, guidance, and love from her parents, Paul and Christine Shannon, and from her “better half”, Kyle, who never once doubted her in the pursuit of her dreams. Her speech is dedicated to the memory of her two brothers, Brian and Danny, who passed away during Ms. Shannon’s tenure at UMass Law, and whose pride and support fueled her drive to achieve her goals. After sitting for the Massachusetts Bar Exam in July, Ms. Shannon plans to continue her career at Bristol County Savings Bank where she will focus on enterprise risk management, corporate governance, contracts, real estate, and other legal matters. She earned her bachelor’s degree in Criminology with a minor in Business Administration from Stonehill College.

Kebeh G. Sando was born in Liberia, West Africa. During the 14-year long Liberian Civil War, Ms. Sando immigrated to the United States at the age of eight as a refugee, leaving behind her single mother. Raised by family members, and one memorable aunt, she owes all of her accomplishments to “her faith in Jesus Christ” and the wonderful support systems she has had throughout her life. Ms. Sando holds a bachelor’s degree in psychology from Kean University in New Jersey and is now receiving a master of arts degree in clinical psychology at UMass Dartmouth. Throughout her life, education has been her one constant, and she has vowed to help impoverished children reach their educational goals. She volunteers at national and international nonprofit organizations that focus on youth empowerment, including the Young Life Rhode Island and Change Agent Network. She is working with the Change Agent Network to send 150 Liberian children to school by the end of 2019. In addition, Ms. Sando held internships at South Coast Clinic in Stoughton and Child & Family Services in New Bedford. After graduation, she will begin work at the Massachusetts Treatment Center in Bridgewater as a Clinical Therapist.