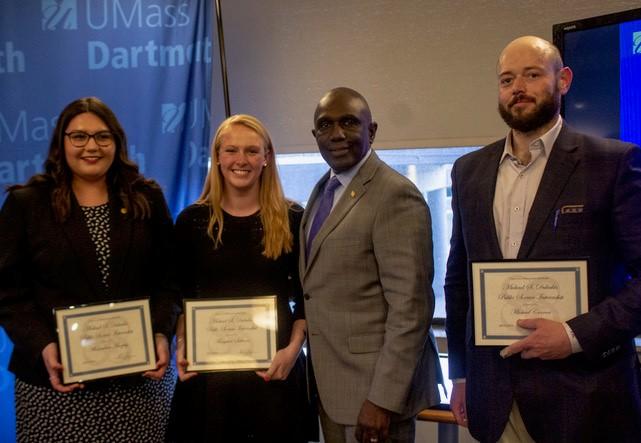 The Student Civic Leadership Award was presented to Michael Curran, a junior Psychology major from Plymouth, Massachusetts. Overcoming addiction and homelessness, Curran found a sense of purpose to serve others and give back. Curran helps those in the recovery community by sharing his experiences and speaks to Boston area high schools about substance abuse, peer pressure, and goal setting.

The Faculty Civic Leadership Award was presented to retired Marketing professor, Jack Chopoorian. Chopoorian began his academic career at UMass Dartmouth in 1977 where he ushered thousands of students into community service. Chopoorian, a navy veteran and Fulbright Scholar, was the chair of the Marketing and Management Information Systems department and interim Dean of the Charlton College of Business.

The Jonathan Blake Waxler Prize for Social Justice was awarded to Eric James, a junior Crime & Justice Studies major from Brockton, Massachusetts. The prize was established in 1996 in memory of the son of Professor Robert Waxler. The prize recognizes a student who has exhibited a dedication to social activism, advocacy, or community organizing. James is president of the Beta Phi Chapter of Iota Phi Theta Fraternity, and the founder of House of Deliberations, a student group whose aim is to bring together students from across the university to discuss important and diverse topics.

The event ended with a tribute to the late Rev. Dr. Robert Lawrence. Lawrence was a strong advocate for civic engagement at UMass Dartmouth. Each year the university hosts the Reverend Dr. Robert Lawrence Lecture, which is designed to promote civic engagement and community building. Speakers provide thought-provoking presentations about service that inspire the audience to be more engaged in their communities. Lawrence’s wife, Beth Duffy, was presented with an autographed framed poster from the last Lawrence Lecture featuring David Hogg and Jaclyn Corrin, survivors of the February 14, 2018, shooting at Marjory Stoneman Douglas High School in Parkland, Florida. Their talk, "Engaging Student Voices: A Focus on Voting, Gun Control, and Anti-Violence", focused on how young people can affect policy through voting.